The Home Office (HO) is a ministerial department of the Her Majesty's Government, responsible for immigration, security, and law and order. As such it is responsible for the police, British Visas and Immigration, and the Security Service (MI5). It is also in charge of government policy on security-related issues such as drugs, counter-terrorism, and ID cards. It was formerly responsible for Her Majesty's Prison Service and Probation Service, but these have transferred to the Ministry of Justice.

It continues to be known, especially in official papers and when referred to in Parliament, as the Home Department.[2]

The Home Office is headed by the Home Secretary, a Cabinet minister supported by the senior civil servant, the Permanent Secretary.

As of October 2014, the Home Office comprised the following organisations:[3]

In October 2012, a number of functions of the National Policing Improvement Agency were transferred to the Home Office ahead of the future abolition of the agency.[4]

The Home Office Ministers are as follows:[5]

Permanent Under Secretaries of State of the Home Office

The Department outlined its aims for this Parliament in its Business Plan, which was published in May 2011 and superseded its Structural Reform Plan.[8] The plan said the department will:

1. Empower the public to hold the police to account for their role in cutting crime
2. Free up the police to fight crime more effectively and efficiently
3. Create a more integrated criminal justice system
4. Secure our borders and reduce immigration
5. Protect people's freedoms and civil liberties
6. Protect our citizens from terrorism
7. Build a fairer and more equal society (through the Government Equalities Office)

The Home Office publishes progress against the plan on the 10 Downing Street website.[9]

On 27 March 1782, the Home Office was formed by renaming the existing Southern Department, with all existing staff transferring. On the same day, the Northern Department was renamed the Foreign Office.

To match the new names, there was a transferring of responsibilities between the two Departments of State. All domestic responsibilities were moved to the Home Office, and all foreign matters became the concern of the Foreign Office.

Most subsequently created domestic departments (excluding, for instance, those dealing with education) have been formed by splitting responsibilities away from the Home Office.

The initial responsibilities were:

Responsibilities were subsequently changed over the years that followed:[10]

The Home Office retains a variety of functions that have not found a home elsewhere, and sit oddly with the main law-and-order focus of the department, such as regulation of British Summer Time.

On 7 April 2012, hacktivist group Anonymous temporarily took down the UK Home Office website. The group took responsibility for the attack, which was part of ongoing Anonymous activity in protest against the deportation of hackers as part of Operation TrialAtHome. One Anonymous source claimed in their tweet it was also launched in retaliation for "draconian surveillance proposals".[11]

On 18 July 2012, the Public and Commercial Services Union announced that thousands of Home Office employees would[clarification needed] go on strike over jobs, pay and other issues.[12] However, the PCSU called off the strike before it was planned it claimed the department had, subsequent to the threat of actions, announced 1,100 new border jobs.[13] 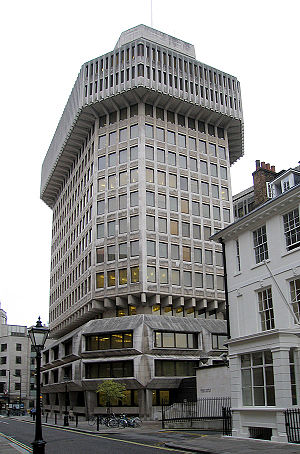 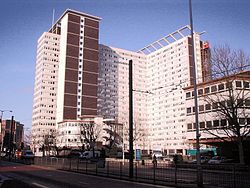 Lunar House in Croydon, which holds the headquarters of the Home Office UK Border Agency

From 1978 to 2004, the Home Office was located at 50 Queen Anne's Gate, a Brutalist office block in Westminster designed by Sir Basil Spence, close to St. James's Park tube station. Many functions, however, were devolved to offices in other parts of London and the country, notably the headquarters of the Immigration and Nationality Directorate in Croydon.

In 2005, the Home Office moved to a new main office designed by Sir Terry Farrell at 2 Marsham Street, Westminster, SW1P 4DF, on the site of the demolished Marsham Towers building of the Department of the Environment.[14]

For external shots of its fictional Home Office, the TV series Spooks uses an aerial shot of the Government Offices Great George Street instead, serving as stand-in to match the distinctly less modern appearance of the fictitious accommodation interiors the series uses.[citation needed]

To meet the UK's 5-year science and technology strategy,[15] the Home Office sponsors research in police sciences including:

Most front-line law and order policy areas, such as policing and criminal justice, are devolved in Scotland and Northern Ireland but the following reserved and excepted matters are handled by Westminster.

The Scottish Government Justice and Communities Directorates are responsible for devolved justice and home affairs policy.

The following matters were not transferred at the devolution of policing and justice on 12 April 2010 and remain reserved:[18]

The Home Office's main counterparts in Northern Ireland are:

Under the Welsh devolution settlement, specific policy areas are transferred to the National Assembly for Wales rather than reserved to Westminster.