Hopewell Culture National Historical Park is a United States national historical park with earthworks and burial mounds from the Hopewell culture, indigenous peoples who flourished from about 200 BC to AD 500. The park is composed of six separate sites in Ross County, Ohio, including the former Mound City Group National Monument. The park includes archaeological resources of the Hopewell culture. It is administered by the United States Department of the Interior's National Park Service.

In January 2008 the Department of the Interior included Hopewell Culture National Historical Park as part of the "Hopewell Ceremonial Earthworks", one of 14 sites on its "tentative list" from which the United States makes nominations for the UNESCO World Heritage Sites.[2] 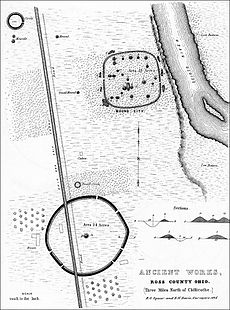 From about 200 BC to AD 500, the Ohio River Valley was a central area of the prehistoric Hopewell culture. The term Hopewell (taken from an early farmer who owned the land where one of the mound complexes was located) culture is applied to a broad network of beliefs and practices among different Native American peoples who inhabited a large portion of eastern North America. The culture is characterized by its construction of enclosures made of earthen walls, often built in geometric patterns, and mounds of various shapes. Visible remnants of Hopewell culture are concentrated in the Scioto River valley near present-day Chillicothe, Ohio.

The most striking Hopewell sites contain earthworks in the form of squares, circles, and other geometric shapes. Many of these sites were built to a monumental scale, with earthen walls up to 12 feet (3.7 m) high outlining geometric figures more than 1,000 feet (300 m) across. Conical and loaf-shaped earthen mounds up to 30 feet (9.1 m) high are often found in association with the geometric earthworks. The people who built them had a detailed knowledge of the local soils, and they combined different types to provide the most stability to the works. It required the organized labor of thousands of man hours, as people carried the earth in handwoven baskets. 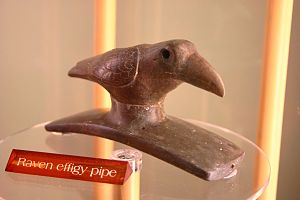 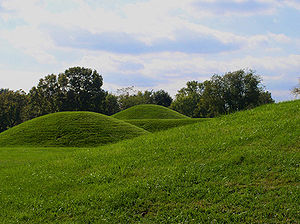 Another view of the Mound City Site. 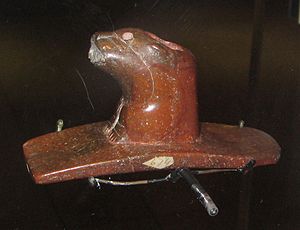 Mound City, located on Ohio Highway 104 approximately 4 miles (6.4 km) north of Chillicothe along the Scioto River, is a group of 23 earthen mounds constructed by the Hopewell culture. Each mound within the group covered the remains of a charnel house. After the Hopewell people cremated the dead, they burned the charnel house. They constructed a mound over the remains. They also placed artifacts, such as copper figures, mica, projectile points, shells, and pipes in the mounds.

European Americans first mapped the site in the 1840s. The archaeologists Ephraim George Squier and Edwin Hamilton Davis were the first excavators of the site and amassed a large collection of Mound artefacts that is now preserved at the British Museum.[4] Much of it was destroyed during World War I when the United States Army constructed a military training base, the Camp Sherman, on the site. After the war, they razed the camp. The Ohio Historical Society conducted an archeological excavation of the site from 1920–1922, followed by reconstruction of the mounds.[5] In 1923, the Department of Interior declared the Mound City Group a National Monument, to be administered by the Federal government.

In 1992, Mound City Group was renamed and expanded as Hopewell Culture National Historic Park. Its definition included remnants of four other nearby earthwork and mound systems. Two Ross County sites are within a few miles of Mound City and open to the public. Seip Earthworks is located 17 miles (27 km) west of Chillicothe on U.S. Route 50; it is administered by the Ohio Historical Society. Hopewell Mound Group is the site of the 1891 excavation on the land of Capt. Mordecai Hopewell (for whom the culture is named). Although High Bank Works and Hopeton Earthworks are included in the national park and maintained by the National Park Service, they are not open to visitors.

The Ohio Historical Society also maintains a number of mound systems and elaborate earthworks in the southern Ohio area, including the National Historic Landmarks of Fort Ancient, Newark Earthworks, and Serpent Mound. Fifteen mound complexes earlier identified in the county have been lost to agriculture or urban development.

The national park contains nationally significant archaeological resources, including large earthwork and mound complexes. These provide insight into the sophisticated and complex social, ceremonial, political, and economic life of the Hopewell people.