From Infogalactic: the planetary knowledge core
Jump to: navigation, search
"Uktena" redirects here. For the tribe of werewolves in the World of Darkness setting, see Uktena (World of Darkness). 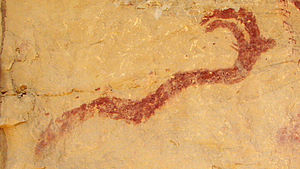 The Horned Serpent appears in the mythologies of many Native Americans.[1] Details vary among tribes, with many of the stories associating the mystical figure with water, rain, lightning and/or thunder. Horned Serpents were major components of the Southeastern Ceremonial Complex of North American prehistory.[2][3]

Horned serpents also appear in European and Near Eastern mythology. 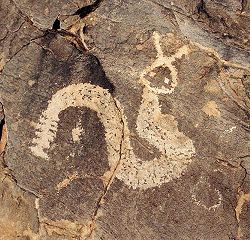 Horned serpents appear in the oral history of numerous Native American cultures, especially in the Southeastern Woodlands and Great Lakes.

Muscogee Creek traditions include a Horned Serpent and a Tie-Snake, estakwvnayv in the Muscogee Creek language. These are sometimes interpreted as being the same creature and sometimes different — similar, but the Horned Serpent is larger than the Tie-Snake. To the Muscogee people, the Horned Serpent is a type of underwater serpent covered with iridescent, crystalline scales and a single, large crystal in its forehead. Both the scales and crystals are prized for their powers of divination.[4] The horns, called chitto gab-by, were used in medicine.[5] Jackson Lewis, a Muscogee Creek informant to John R. Swanton, said, "This snake lives in the water has horns like the stag. It is not a bad snake. ... It does not harm human beings but seems to have a magnetic power over game."[6] In stories, the Horned Serpent enjoyed eating sumac, Rhus glabra.[7]

Alabama people call the Horned Serpent, tcinto såktco or "crawfish snake," which they divide into four classifications based on its horns' colors, which can be blue, red, white, or yellow.[6]

Yuchi people made effigies of the Horned Serpent as recently as 1905. An effigy was fashioned from stuffed deerhide, painted blue, with the antlers painted yellow. The Yuchi Big Turtle Dance honors the Horned Serpent's spirit, which was related to storms, thunder, lightning, disease, and rainbows.[5]

Among Cherokee people, a Horned Serpent is called an uktena. Anthropologist James Mooney, describes the creature:

Those who know say the Uktena is a great snake, as large around as a tree trunk, with horns on its head, and a bright blazing crest like a diamond on its forehead, and scales glowing like sparks of fire. It has rings or spots of color along its whole length, and can not be wounded except by shooting in the seventh spot from the head, because under this spot are its heart and its life. The blazing diamond is called Ulun'suti—"Transparent"—and he who can win it may become the greatest wonder worker of the tribe. But it is worth a man's life to attempt it, for whoever is seen by the Uktena is so dazed by the bright light that he runs toward the snake instead of trying to escape. As if this were not enough, the breath of the Uktena is so pestilential, that no living creature can survive should they inhale the tiniest bit of the foul air expelled by the Uktena. Even to see the Uktena asleep is death, not to the hunter himself, but to his family.

According to Sioux belief, the Unhcegila (Ųȟcéǧila) are dangerous reptilian water monsters that lived in ancient times. They were of various shapes. In the end the Thunderbirds destroyed them, except for small species like snakes and lizards. This belief may have been inspired by finds of dinosaur fossils in Sioux tribal territory. The Thunderbird may have been inspired partly by finds of pterosaur skeletons.[8] 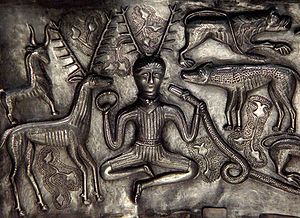 The antlered deity of the Gundestrup cauldron, commonly identified with Cernunnos, holding a ram-horned serpent and a torc.

The ram-horned serpent is a well-attested cult image of north-west Europe before and during the Roman period. It appears three times on the Gundestrup cauldron, and in Romano-Celtic Gaul was closely associated with the horned or antlered god Cernunnos, in whose company it is regularly depicted. This pairing is found as early as the fourth century BC in Northern Italy, where a huge antlered figure with torcs and a serpent was carved on the rocks in Val Camonica.[9]

A bronze image at Étang-sur-Arroux and a stone sculpture at Sommerécourt depict Cernunnos' body encircled by two horned snakes that feed from bowls of fruit and corn-mash in the god's lap. Also at Sommerécourt is a sculpture of a goddess holding a cornucopia and a pomegranate, with a horned serpent eating from a bowl of food. At Yzeures-sur-Creuse a carved youth has a ram-horned snake twined around his legs, with its head at his stomach. At Cirencester, Gloucestershire, Cernunnos' legs are two snakes which rear up on each side of his head and are eating fruit or corn. According to Miranda Green, the snakes reflect the peaceful nature of the god, associated with nature and fruitfulness, and perhaps accentuate his association with regeneration.[9]

Other deities occasionally accompanied by ram-horned serpents include "Celtic Mars" and "Celtic Mercury". The horned snake, and also conventional snakes, appear together with the solar wheel, apparently as attributes of the sun or sky god.[9]

The description of Unktehi or Unktena is, however, more similar to that of a Lindorm in Northern Europe,[citation needed] especially in Southern Scandinavia, and most of all as described in folklore in Eastern Denmark (including the provinces lost to Sweden in 1658). There, too, it is a water creature of huge dimensions, while in Southern Sweden it is a huge snake, the sight of which was deadly.[citation needed] This latter characteristic is reminiscent of the basilisk.

In Mesopotamian mythology Ningishzida, a prototype of the Biblical serpent in the Garden of Eden, is sometimes depicted as a serpent with horns. In other depictions he is shown as human, but is accompanied by bashmu, horned serpents. Ningishzida shares the epithet ushumgal, "great serpent", with several other Mesopotamian gods.[citation needed]