From Infogalactic: the planetary knowledge core
Jump to: navigation, search
For other uses, see Hourglass (disambiguation).

Hourglass in a three-legged stand

An hourglass (or sandglass, sand timer, sand watch, or sand clock) is a mechanical device used to measure the passage of time. It comprises two glass bulbs connected vertically by narrow neck that allows a regulated trickle of material (historically sand) from the upper bulb to the lower one. Factors affecting the time interval measured include the sand quantity, the sand coarseness, the bulb size, and the neck width. Hourglasses may be reused indefinitely by inverting the bulbs once the upper bulb is empty.

File:Peleus-Thetis-350.jpg
Sarcophagus dated c. 350 AD, representing the wedding of Peleus and Thetis (observe the magnification with the hourglass held by Morpheus in his hands)

The origin of the hourglass is unclear. Its predecessor the clepsydra, or water clock, may have been invented in ancient Egypt. According to the American Institute of New York, the clepsammia or sand-glass was invented at Alexandria about 150 BC.[1] According to the Journal of the British Archaeological Association the so-called clepsammia were in use before the time of St. Jerome (335 AD), and the first representation of an hourglass is in a sarcophagus dated c. 350 AD,[2] representing the wedding of Peleus and Thetis, discovered in Rome in the 18th century, and studied by Winckelmann in the 19th century, who remarked the hourglass held by Morpheus in his hands.[3]

Reappearance in the Early Middle Ages 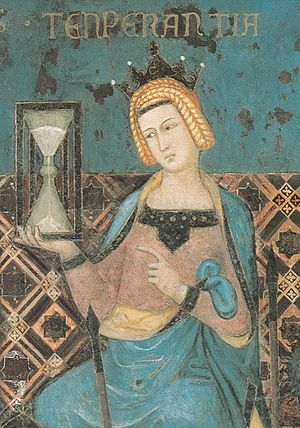 There are no records of the hourglass existing in Europe prior to the Early Middle Ages.[4] In the 8th century it is mentioned by a monk named Luitprand, who served at the cathedral in Chartres, France.[5][6] But it was not until the 14th century that the hourglass was seen commonly, the earliest firm evidence being a depiction in the 1338 fresco Allegory of Good Government by Ambrogio Lorenzetti.[7]

Use of the marine sandglass has been recorded since the 14th century. The written records about it were mostly from logbooks of European ships.[4] In the same period it appears in other records and lists of ships stores. The earliest recorded reference that can be said with certainty to refer to a marine sandglass dates from c. 1345, in a receipt of Thomas de Stetesham, clerk of the King's ship La George, in the reign of Edward III of England; translated from the Latin, the receipt says: in 1345:[8][9]

"The same Thomas accounts to have paid at Lescluse, in Flanders, for twelve glass horologes (" pro xii. orlogiis vitreis "), price of each 4½ gross', in sterling 9s. Item, For four horologes of the same sort (" de eadem secta "), bought there, price of each five gross', making in sterling 3s. 4d."[5][8][9]

Marine sandglasses were very popular on board ships, as they were the most dependable measurement of time while at sea. Unlike the clepsydra, the motion of the ship while sailing did not affect the hourglass. The fact that the hourglass also used granular materials instead of liquids gave it more accurate measurements, as the clepsydra was prone to get condensation inside it during temperature changes.[10] Seamen found that the hourglass was able to help them determine longitude, distance east or west from a certain point, with reasonable accuracy.[10]

The hourglass also found popularity on land. As the use of mechanical clocks to indicate the times of events like church services became more common, creating a 'need to keep track of time', the demand for time-measuring devices increased. Hourglasses were essentially inexpensive, as they required no rare technology to make and their contents were not hard to come by, and as the manufacturing of these instruments became more common, their uses became more practical.[10]

Hourglasses were commonly seen in use in churches, homes, and work places to measure sermons, cooking time, and time spent on breaks from labor.[4] Because they were being used for more everyday tasks, the model of the hourglass began to shrink. The smaller models were more practical and very popular as they made timing more discreet.

After 1500 A.D., the hourglass was not as widespread as it had been. This was due to the development of the mechanical clock, which became more accurate, smaller and cheaper, and made keeping time easier.[6] The hourglass, however, did not disappear entirely. Although they became relatively less useful as clock technology advanced, hourglasses remained desirable in their design. Some of the most famous hourglasses are the twelve-hour hourglass of Charlemagne of France and the hourglasses of Henry VIII of England, made by the artist Holbein in the 16th century.[6] The oldest known surviving hourglass resides in the British Museum in London.[4]

Not until the 18th century did the Harrison brothers, John and James, come up with a marine chronometer that significantly improved on the stability of the hourglass at sea. Taking elements from the design logic behind the hourglass, they made a marine chronometer in 1761 that was able to accurately measure the journey from England to Jamaica accurate within five seconds.[6]

Little written evidence exists to explain why its external form is the shape that it is. The glass bulbs used, however, have changed in style and design over time. While the main designs have always been ampoule in shape, the bulbs were not always connected. The first hourglasses were two separate bulbs with a cord wrapped at their union that was then coated in wax to hold the piece together and let sand flow in between.[6] It was not until 1760 that both bulbs were blown together to keep moisture out of the bulbs and regulate the pressure within the bulb that varied the flow.[10]

While some hourglasses actually did use sand as the granular mixture to measure time, many did not use sand at all. The material used in most bulbs was a combination of "powdered marble, tin/lead oxides, and pulverized, burnt eggshell".[4] Over time, different textures of granule matter were tested to see which gave the most constant flow within the bulbs. It was later discovered that for the perfect flow to be achieved the ratio of granule bead to the width of the bulb neck needed to be 1/12 or more but not greater than 1/2 the neck of the bulb.[11]

Hourglasses were an early dependable, reusable and accurate measure of time. The rate of flow of the sand is independent of the depth in the upper reservoir, and the instrument will not freeze in cold weather.[4]

From the 15th century onwards, they were being used in a range of applications at sea, in the church, in industry and in cookery.

During the voyage of Ferdinand Magellan around the globe, 18 hourglasses from Barcelona were in the ship's inventory, after the trip being authorized by emperor Charles V.[12] It was the job of a ship's page to turn the hourglasses and thus provide the times for the ship's log. Noon was the reference time for navigation, which did not depend on the glass, as the sun would be at its zenith.[13] A number of sandglasses could be fixed in a common frame, each with a different operating time, e.g. as in a four-way Italian sandglass likely from the 17th century, in the collections of the Science Museum, in South Kensington, London, which could measure intervals of quarter, half, three-quarters, and one hour (and which were also used in churches, for priests and ministers to measure lengths of sermons).[14] 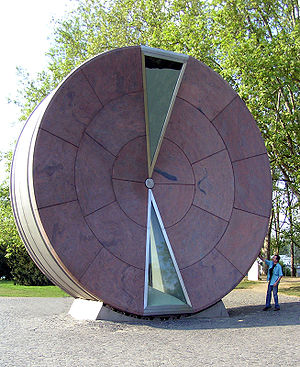 The Timewheel in Budapest, Hungary.

While they are no longer widely used for keeping time, some institutions do maintain them. Both houses of the Australian Parliament use three hourglasses to time certain procedures, such as divisions.[15]

The sandglass is still widely used as the kitchen egg timer; for cooking eggs, a three-minute timer is typical,[16] hence the name "egg timer" for three-minute hourglasses. Egg timers are sold widely as souvenirs.[citation needed] Sand timers are also sometimes used in games such as Pictionary and Boggle to implement a time constraint on rounds of play, and provide a sense of urgency to the game of Quicksand.

Unlike most other methods of measuring time, the hourglass concretely represents the present as being between the past and the future, and this has made it an enduring symbol of time itself.

The hourglass, sometimes with the addition of metaphorical wings, is often depicted as a symbol that human existence is fleeting, and that the "sands of time" will run out for every human life.[17] It was used thus on pirate flags, to strike fear into the hearts of the pirates' victims. In England, hourglasses were sometimes placed in coffins,[18] and they have graced gravestones for centuries. The hourglass was also used in alchemy as a symbol for hour.

Recognition of the hourglass as a symbol of time has survived its obsolescence as a timekeeper. For example, the American television soap opera Days of Our Lives, since its first broadcast in 1965, has displayed an hourglass in its opening credits, with the narration, "Like sands through the hourglass, so are the days of our lives," spoken by Macdonald Carey.

Various computer graphical user interfaces may change the pointer to an hourglass during a period when the program is in the middle of a task, and may not accept user input. During that period other programs, for example in different windows, may work normally. When such an hourglass does not disappear, it suggests a program is in an infinite loop and needs to be terminated, or is waiting for some external event (such as the user inserting a CD). Unicode has an HOURGLASS symbol at U+231B (⌛).

Because of its symmetry, graphic signs resembling an hourglass are seen in the art of cultures which never encountered such objects. Vertical pairs of triangles joined at the apex are common in Native American art; both in North America,[19] where it can represent, for example, the body of the Thunderbird or (in more elongated form) an enemy scalp,[20][21] and in South America, where it is believed to represent a Chuncho jungle dweller.[22] In Zulu textiles they symbolise a married man, as opposed to a pair of triangles joined at the base, which symbolise a married woman.[23] Neolithic examples can be seen among Spanish cave paintings.[24][25] Observers have even given the name "hourglass motif" to shapes which have more complex symmetry, such as a repeating circle and cross pattern from the Solomon Islands.[26] Both the members of Project Tic Toc,from television series the Time Tunnel and the Challengers of the Unknown use symbols of the hourglasse representing either time travel or time running out.