From Infogalactic: the planetary knowledge core
Jump to: navigation, search
Not to be confused with Blue House (disambiguation). 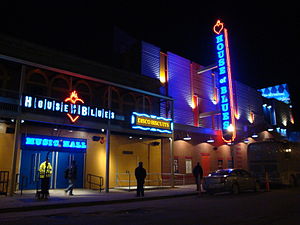 House of Blues across the street from Fenway Park in Boston 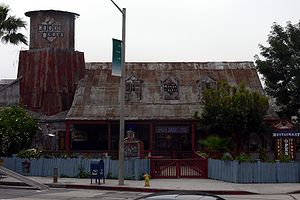 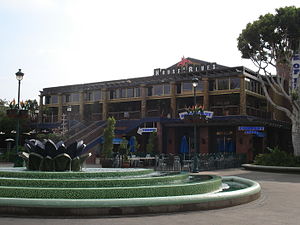 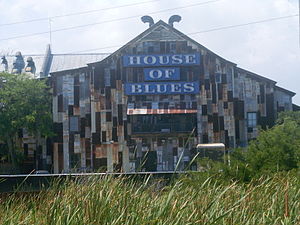 House of Blues in Myrtle Beach

House of Blues at Disney Springs in Florida

House of Blues at Disney Springs in Florida

House of Blues Entertainment LLC is a chain of 13 live music concert halls and restaurants in major markets throughout the United States. House of Blues' first location, in Cambridge's Harvard Square, was opened in 1992 by Isaac Tigrett, co-founder of Hard Rock Cafe, and Dan Aykroyd, co-star of the 1980 film The Blues Brothers.

The first House of Blues opened on November 26, 1992, in the Harvard Square commercial district and retail area of Cambridge, Massachusetts. The company was originally financed by Dan Aykroyd, Aerosmith, Paul Shaffer, River Phoenix, James Belushi, and Harvard University, among others.[citation needed] This original location has since closed.[3] However, the hands-in-concrete driveway where members of the Blues Brothers and others left their mark, still remains.

Aykroyd and Belushi remain associated with the brand and are present for most openings, attending and performing at the opening celebrations of both the Houston and the Boston House of Blues locations. In 1999, House of Blues acquired Universal Concerts from Seagram.[4] On July 5, 2006, Live Nation acquired House of Blues. As a division of Live Nation, the company currently operates 12 clubs throughout North America, with its location in Atlantic City (closed August 2013 along with Showboat Atlantic City) being franchised. Nine of these locations also feature the VIP membership club, Foundation Room.

A location across from Centennial Olympic Park in downtown Atlanta also was put together in time for the 1996 Summer Olympics. It closed soon after and became The Tabernacle in 1998, in reference to its original use as a Baptist tabernacle. In August of 2014, the House of Blues located in the Showboat Atlantic City closed along with the Showboat Casino Resort in Atlantic City, New Jersey. House of Blues Sunset Strip closed in August 2015, with plans to reopen in an as-yet-unnamed location elsewhere in Los Angeles. House of Blues Anaheim, currently located at Downtown Disney at the Disneyland Resort, plans to move into a much larger space at the nearby Anaheim GardenWalk center a block to the east of Disneyland in 2016.[6]