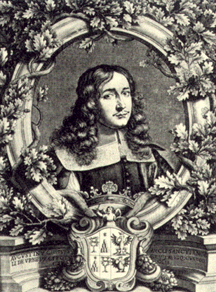 Portrait of the later Agostino Chigi, nephew of Alexander VII.

Chigi is a Roman princely family of Sienese extraction descended from the counts of Ardenghesca, which possessed castles in the Maremma, southern Tuscany. The earliest authentic mention of them is in the 13th century, with one Alemanno, counsellor of the Republic of Siena.

The first very prominent member was Mariano (1439–1504), a banker and two times ambassador of Siena to the Popes Alexander VI and Julius II. He founded the Roman branch of the family, the other branch was started by his brother, Benedetto.

Agostino Chigi (1465–1520) was the most famous member of the family during the Renaissance. He became an immensely rich banker, and built the palace and gardens afterwards known as the Farnesina, decorated by Raphael, and was noted for the splendour of his entertainments. Pope Julius II made him practically his finance minister and gave him the privilege of quartering his own (Della Rovere) arms with those of the Chigi.

Cardinal Fabio Chigi, on being elected pope as Alexander VII at the Conclave of 1655, conferred the Roman patriciate on his family. His elder brother Mario, last commander of the Corsican Guard in Rome, continued the branch of the family in Siena. His brother Augusto continued the line in Rome. Augusto's son Agostino was made Reichsfurst (prince of the Holy Roman Empire) by Leopold I in 1659. Agostino married Maria Virginia Borghese (relative of the Borghese pope), and acquired the principates of Farnese (1658), Campagnano (1661) and Ariccia, where a famous palazzo bearing the family name still exists. The pope also had two nephews who became cardinals, Flavio I, who was his Cardinal-Nephew and one of the main art collectors of the family and built the Villa Cetinale in 1680, and Sigismondo.

In 1712, Prince Augusto, son of Prince Agostino, received the dignity of hereditary marshals of the Roman Catholic Church and guardians of the conclaves, which gave them a prominent ceremonial importance on the death of every pope. During the 18th century, Flavio II became cardinal.

On the marriage in 1735 of another Agostino Chigi (1710–1769) with Giulia Albani, heiress of the Albani, a Venetian patrician family, said to be of Albanian origin, her name was added to that of Chigi.

Prince Mario Chigi Albani della Rovere succeeded his father in 1877 and served as Marshal of the Holy Roman Church at the Conclave of 1878. He married Antonietta, the daughter of Prince Louis of Sayn-Wittgenstein-Sayn in 1857. They had three children, Agostino, Ludovico (Luigi) and Eleonora.

Prince Ludovico Chigi Albani della Rovere (July 10, 1866–November 14, 1951), son of Prince Mario and Antoinette, was Grand Master of the Sovereign Military Order of Malta from 1931 to 1951. In 1893 he married Donna Anna Aldobrandini, Princess of Sarsina; they had three children, Sigismondo, Petro and Laura. Prince Ludovico was Marshal of both the conclave of 1922 and that of 1939.

Prince Sigismondo Chigi (1894–1982), Hereditary Marshal of the Holy Roman Church, was the son of Prince Ludovico Chigi Albani della Rovere (1866–1951) and Donna Anna Aldobrandini, princess of Sarsina. He had one son, Don Agostino Chigi Albani della Rovere (1929–2002) and one daughter, Princess Francesca. He was the Marshal of the Conclave both in 1958 and 1963. The office, to which the Chigi had succeeded after the extinction of the Savelli in 1712, was abolished by Pope Paul VI in a motu proprio, Pontificalis Domus, of March 28, 1968.

The family owns large estates at Siena. The family palace on the Via del Corso in Rome is currently seat of the Italian government. Another Palazzo Chigi in Ariccia is now a museum and site for meetings. The family's mausoleum is in the Chigi Chapel of the Basilica of Santa Maria del Popolo in Rome, the work of Raphael and Gian Lorenzo Bernini.