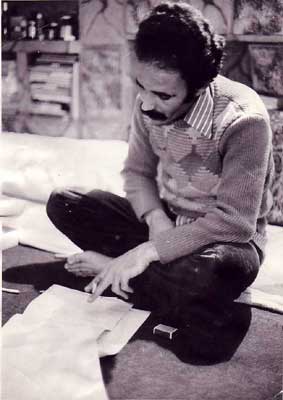 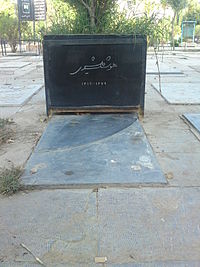 Houshang Golshiri (Persian: هوشنگ گلشیری‎‎ ; 1937 – June 6, 2000) was an Iranian fiction writer, critic and editor. He was one of the first Iranian writers to use modern literary techniques, and is recognized as one of the most influential writers of Persian prose of the 20th century.[1]

Golshiri was born in Isfahan in 1937[2] and raised in Abadan. He came from a large family of modest circumstances. From 1955 to 1974, Golshiri lived in Isfahan, where he completed a bachelor's degree in Persian at the University of Isfahan and taught elementary and high school there and in surrounding towns.

Golshiri began writing fiction in the late 1950s. His publication of short stories in Payam-e Novin and elsewhere in the early 1960s, his establishment of Jong-e Isfahan (1965/73),[3] the chief literary journal of the day published outside of Tehran, and his participation in efforts to reduce official censorship of imaginative literature brought him a reputation in literary circles[citation needed].

Golshiri's first collection of short stories was As Always (1968). He became famous for his first novel Prince Ehtejab (1968/69). Translated in Literature East & West 20 (1980), it is the story of aristocratic decadence, implying the inappropriateness of monarchy for Iran. Shortly after production of the popular feature film based on the novel, Pahlavi authorities arrested Golshiri and incarcerated him for nearly six months.

An autobiographical and less successful novel called Christine and Kid came out in 1971, followed by a collection of short stories called My Little Prayer Room 1975, and a novel called Ra'i's Lost Lamb 1977.

In 1978, Golshiri travelled to the United States. Back in Iran in early 1979, Golshiri married Farzaneh Taheri whom he credits with editing his subsequent writing and was active in the revitalized Association of Iranian Writers, the editing of journals, literary criticism, and short-story writing. In the 1980s, he published The Fifth Innocent (1980), The Antique Chamber (1983), The Story of the Fisherman and the Demon (1984), and Five Treasures (1989), which he published in Stockholm during a visit to Europe in 1989. In 1990, under a pseudonym, Golshiri published a novella in translation called King of the Benighted, an indictment of Iranian monarchy, engage Persian literature, the Tudeh Party, and the Islamic Republic. A collection of Golshiri stories in translation was scheduled for publication in 1991 with the title Blood and Aristocrats and Other Stories.

In the winter of 1998 he published The Book of Genies and Struggle of Image with Painter, and in the autumn of 1999 he released a collection of articles called Garden in Garden.

In 1999 Golshiri was awarded the Erich-Maria Remarque Peace Prize for his struggle to promote democracy and human rights in Iran.[4]

In 1989, in his first trip abroad after the revolution, Golshiri went to the Netherlands along with various cities in the UK and Sweden to give speeches and readings. In 1990, he traveled to the House of World Cultures in Berlin, Germany. On this trip, he spoke and gave readings in various cities in Germany, Sweden, Denmark and France. In the spring two years later, he went to Germany, the United States, Sweden, and Belgium. In 1993, he visited Germany, the Netherlands, and Belgium again.

He died in Iran Mehr hospital in Tehran in June 2000 at the age of 63 after a long illness.

A cultural foundation was established after his death.[5] It runs the prestigious Hooshang Golshiri Literary Awards.