Huerquehue National Park (Spanish pronunciation: [werˈkewe]) is located in the foothills of the Andes, in the Valdivian temperate rainforest of the La Araucanía region in southern Chile. It lies 145 km southeast of Temuco and 33 km east of Pucón, between the Villarrica National Reserve to the west and the Hualalafquén National Reserve to the east. The park encompasses 125 square kilometres (12,500 Ha) of mountainous terrain east of Caburgua Lake, and has an elevation range of 720 to 2,000 m asl.[1]

The national park was created on June 9, 1967 in order to protect the area. However, its origins date back to 1912 and the creation of "Benjamín Vicuña Mackenna Park", also known as "Colico", which encompassed 265,000 Ha. Today, that land is divided into various different parks and reserves.

Huerquehue is a Mapudungun word (the language of the Mapuche people) that means "the messenger’s place". One of the most noteworthy features of Huerquehue National Park are its ancient Araucaria (Araucaria araucana) forests, the tree commonly known as "monkey puzzle". These are the backdrop for the clear lakes and lagoons that dot the park, including Tinquilco Lake, which lies in the lower portion of this protected area.

The park main entrance lies 2 kilometres from Tinquilco Lake on Kilometre 20 of the road to Caburga Lake. The park ranger’s cabin is located at this main entrance. The park is open all year round.

The park experiences two main seasonal climates throughout the year: a warm summer with less than four dry months, and a cold, icy winter caused by the high altitude. The wettest months are from May to September, with an annual rainfall index of 2,045 mm (80 in).

Most basins in this area are exorheic (open and closed lakes), both lentic (still waters) and lotic (flowing streams). The largest water courses are the rivers Renahue Blanco and Quinchol. There are also several permanent minor water courses. There are 20 lagoons, most of which are smaller than 7.5 ha. The most important water sources are the lakes (27,5 ha) and Verde (32.5 ha), and the lagoons , Los Patos, Huerquehue, Escondida, Seca, Clara, Las Avutardas, Angelina and Los Cóndores, among others. Those water bodies belong to the hydrographic basin of Toltén River. 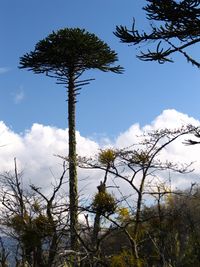 Some of the protected species that can be found in the park are:[4]