The Hull Blitz was the Nazi German bombing campaign targeting on the English port city of Kingston upon Hull, during the Second World War.

Hull was the most severely damaged British city or town during the Second World War, with 95 percent of houses damaged.[1] Hull had more than 1,000 hours spent under air raid alerts.[2] Hull was the target of the first daylight raid of the war and the last piloted air raid on Britain.[1]

Of a population of approximately 320,000 at the beginning of the war, approximately 152,000 were made homeless as a result of bomb destruction or damage.[3] Overall almost 1,200 people were killed and 3,000 injured by the air raids.[4]

Despite the damage the port continued to function throughout the war.[7]

We lived in the middle of an industrial area that was a regular target for German bombers .. One night as we were all filing into the air raid shelter Mam dashed back into the house. "Where are you going, Mary," said Dad. "Back for my false teeth," she replied. "Come back here, the Germans are dropping bombs not meat pies," shouted Dad.

During the First World War Hull was bombed several times by Zeppelin airships. An intended raid on London by Zeppelin L9 was diverted to Hull owing to bad weather and on 6/7 June 1915 dropped 13 explosive and 50 incendiary bombs, destroying 40 houses and killing 24, and led to mobs attacking shops belonging to people believed to be of German origin. An attempted raid on Hull on 8/9 August 1915 bombed Goole by mistake owing to a navigation error. On 5 March 1916 two Zeppelins L11 and L14 were diverted to Hull from an attack on the fleet at Rosyth. Bombs were dropped on Earles shipyard (Docks) and on Paragon station (city centre) resulting in deaths. The raids showed that Hull was completely unprotected from aerial attack and public anger led to service personnel being mobbed. Further attacks came on 25 September 1917 and 10 March 1918.[9]

At the beginning of the Second World War, in 1939, ten primary targets had been identified in Hull: three near Stoneferry, the water works, gas works, Sculcoates power station, the oil refinery (Saltend) and the six docks.[3][12] Additional targets included large grain mills on the River Hull.[12]

Hull's first air-raid warning was at 02:45 on Monday 4 September 1939: as an 'air-raid yellow' all operational crews were called to their posts. The public siren sounded at 03:20 and the all-clear at 04:08. No raid occurred.[citation needed]

The attacks on Hull during 1940 were at a relatively low level and scale, carried out by single or small numbers of planes.[13] The first recorded bombing raid on Hull was during the night of 19/20 June 1940, with minor damage to Chamberlain Street.[14] By the end of the year around 20 raids had taken place and 12 people had been killed by the bombing.[13]

An air raid on the oil depot east of Hull at Saltend caused serious fire owing to ruptured fuel-storage tanks and five men were honoured with the George Medal for their bravery in containing the fire: two firemen: Jack Owen, and Clifford Turner; and three Saltend workers: George Archibald Howe, George Samuel Sewell, and William Sigsworth.[15]

Bombing intensity increased in the early part of 1941. In February several attacks resulted in multiple casualties, with around 20 people killed.[16][17] In March major raids took place on the nights of the 13/14th, 14/15, and 18/19th. The first large attack targeted the River Hull corridor with damage to paint businesses in Stoneferry; the second on St. Andrew's Dock, a public shelter in Bean Street nearby was hit by a parachute mine (also known as "land mines") causing multiple deaths; the third major raid lasted six hours, and resulted in nearly 100 deaths, bombs dropped over a wide area of Hull, concentrated on the River Hull corridor, with many bombs also causing damage west of the river.[17][16] On 31 March/1 April the city centre was targeted, with predominant use of land mines.[18] From the beginning of March to April bombing resulted in 200 deaths.[17]

Attacks continued in April, with a major attack taking place on the 15/16th focused on Alexandra Dock, additionally land mine hit a public shelter resulting in over 4 deaths, further land mine attacks took place on the two nights between 25 and 27 April – six people were killed by a land mine hitting the Gipsyville estate.[19]

File:Albert and William Wright Docks, Kingston upon Hull 9.jpg
Remains of the burnt out Riverside Quay (2011)

From 3 to 9 May the docks and city centre became the target- these attacks came in the context of Luftwaffe attack on other ports and shipping centres including Merseyside, Belfast, Clydeside and on London before the German invasion of the Soviet Union in June, (see Operation Barbarossa). Two major attacks took place on the nights between 7 and 9 May, each lasting around 5–6 hours, the bombing included high explosives, parachute mines, and extensive use of incendiary bombs.[20] During the attacks many well known buildings were damaged or destroyed including the department stores of Hammonds, Edwin Davis, and Thornton-Varley and other buildings in the commercial centre. On the docks the Riverside Quay was destroyed by fire, and major fires created at timber storage around the Hedon Road area. The Rank Flour Mill was directly damaged, as was the Corporation bus depot, and the buildings of the Hull Corporation telephone system. In addition to the areas of concentration bombs fell on area across the whole town. Over 400 people were killed during the attack, with many casualties due to bombs hitting communal bomb shelters.[21][17][17][22]

After the start of the German campaign in Russia attacks on England diminished as much of the Luftwaffe moved east.[23] Attacks continued sporadically through late May, June and July, with a major attack on east Hull and the Victoria Dock on the night of 18/19 July. Reckitt's (Dansom Lane) and the East Hull gas works were also badly damaged. Around 140 people were killed by the bombing, many from the areas around the works.[24][17]

The practice of travelling to the countryside to sleep in the fields when bombing was expected had begun in the First World War and by 1941 an estimated third of the population were leaving the city at night.[25] In August 1941 King George VI and Queen Elizabeth visited Hull to see the damage.[26]

Minor attacks continued approximately monthly until the end of the year, with serious bombing in the early morning of 18 August and the night of 31 August/1 September.[27][17]

Attacks were reduced in 1942 compared to 1941,[17][28] a major bombing raid on 19/20 May targeted Alexandra and Victoria docks and the surrounding area. Also in the Marlborough Avenue and Blenheim Street and Wharneford Gardens where 4 people were killed. It is thought the attacks on the docks served the objective of diminishing supplies shipped to Russia.[29] By this stage bomb weight had increased, with 500 kg bombs in common use. On 1 August another raid centred on the eastern docks killed 24 people at Grindell Street when a 1,800 kg bomb was dropped on it. There were attacks in October and December, with comparatively limited damage, each killing two people.[30]

Minor attacks took place on 3 and 15 January 1943, with phosphorus bombs being identified as used as incendiaries in the second attack.[31]

On 24 June a larger-scale attack took place, with the city centre targeted again. During this attack the well-known Hull Municipal Museum was destroyed by fire. The government allowed Hull to be named specifically as the target of the attack and the Hull Daily Mail ran a front-page headline the next day.[31][32] Another attack took place on 13/14 July, which appears have been intended to damage the railway system and caused more than 20 deaths. Two further attacks later in the year failed to penetrate the city's defences.[33][34]

In March 1945 the city came under ground attack with cannon shells being fired. There was an attack on 17/18 March, with fragmentation grenades being dropped.[35][36]

The bombing campaign in Britain resulted in 121 people in the East Riding of Yorkshire being killed – 82 civilians and 39 military deaths. The Luftwaffe targeted coastal towns such as Bridlington, Hornsea and Withernsea, killing a total of 44 people, as well as RAF airfields such as RAF Driffield, RAF Catfoss and RAF Leconfield. An attack on RAF Driffield on 15 August 1940 killed 15 people.[37]

Other attacks on East Yorkshire were on the outskirts of Hull and included the fist daylight raid on British soil at the Saltend oil terminal and the attack on the Blackburn Aircraft factory at Brough. Bombs were also dropped in error owing to poor navigation or the Hull Docks decoy. These attacks killed 22 people in Hedon, Bilton and Preston. Other bombing activity was caused by the Luftwaffe dumping bombs after abandoning raids not just on Hull but also on Manchester, Liverpool, Leeds and other northern targets. Death and destruction inflicted by the enemy also included sea mines exploding as they hit the coast and enemy aircraft shooting down allied aircraft over East Yorkshire.[37]

On 24 December 1944 a massed aerial V-1 flying bomb attack was launched on Manchester, one of the bombs impacting prematurely at Willerby, just outside Hull, damaging housing and the Springhead Pumping Station.[38][39]

Around 38,000 children were evacuated from Hull. In addition to rural East Yorkshire and Lincolnshire children were evacuated to Lancashire, Norfolk, Northumberland, Leicester and elsewhere. Entire secondary schools were relocated: for example Hymers College had pupils in Pocklington and Market Weighton whilst Newland High School moved to Bridlington and later Malton. However many pupils remained in the city and most evacuees returned from the end of 1942 onwards.[40]

As with many towns and cities, contemporary radio and newspaper reports did not usually identify Hull by name, but referred to it as a "north-east coast town," "north-east town," or "northern town" to avoid providing the enemy with tactical information of damage.[41][42]

The Hull Daily Mail referred to victims by name but locations and industrial damage were not. Damage to schools and churches was freely reported. German press releases were quoted verbatim in the British press, including the name of the town.[43]

OUR OBJECTIVE: THE SUPPLY PORT OF HULL The British Port of Hull, with its multi-purpose dockyards, its wharves and its strategically important industrial sites – this was our target yet again today. Along with the other aircrews of our unit, we took off last night, having taken aboard the bomb load which we intended to deposit to good effect in the middle of the great dockyards .. [..] 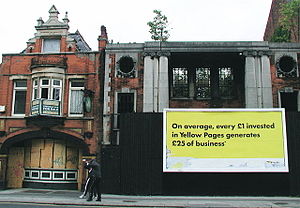 The city was rebuilt in the post-war period,[45][6] A grand scheme, the "Abercrombie Plan", was commissioned from Edwin Lutyens and Patrick Abercrombie but not carried out.[46][45] Several sites remained unredeveloped into the 1980s.[45]

At the site of the Hull Municipal Museum, destroyed by fire during the Blitz, many items of the collection were rediscovered during redevelopment during the 1990s and recovered as part of an archaeological excavation.[32]

The former National Picture Theatre was hit by an incendiary in 1941. The shell of the building remained unredeveloped and undemolished for sixty years, becoming one of the last visible bomb sites in Britain, as a consequence of which the building was listed in 2007.[1][47]

One oddity of the bombing campaign was the Hull works of the National Radiator Company Ltd.; not a single German bomb fell on the works throughout the entire war despite it occupying a 55 acres (22 ha) site, having been used for munition production during the First World War and having been identified as a Gewehr- und Kleinmunitionsfabrik ("rifle and small munitions factory") on German bombing maps.[48] Captured documents later showed it was the intended target of a raid in April 1941.[49]