There are normally thirty-three vertebrae; the upper twenty-four are articulating and separated from each other by intervertebral discs, and the lower nine are fused in adults, five in the sacrum and four in the coccyx or tailbone. The articulating vertebrae are named according to their region of the spine. There are seven cervical vertebrae, twelve thoracic vertebrae and five lumbar vertebrae. The number of vertebrae in a region can vary but overall the number remains the same. The number of those in the cervical region however is only rarely changed.[2]

There are ligaments extending the length of the column at the front and the back, and in between the vertebrae joining the spinous processes, the transverse processes and the vertebral laminae.

The human vertebral column consists of 33 vertebrae. [3] These are divided into different regions, which correspond to the curves of the spinal column. These regions are called the cervical spine, thoracic spine, lumbar spine, sacrum and coccyx. There are a total of 33 vertebrae in the vertebral column. The articulating vertebrae are named according to their region of the spine. There are seven cervical vertebrae, twelve thoracic vertebrae and five lumbar vertebrae. Vertebrae in these regions are essentially alike, with minor variation.

The number of vertebrae in a region can vary but overall the number remains the same. The number of those in the cervical region however is only rarely changed.[2]

Individual vertebrae are named according to their region and position. From top to bottom, the vertebrae are:

The upper cervical spine has a curve, convex forward, that begins at the axis (second cervical vertebra) at the apex of the odontoid process or dens, and ends at the middle of the second thoracic vertebra; it is the least marked of all the curves. This inward curve is known as a lordotic curve.

The lumbar curve is more marked in the female than in the male; it begins at the middle of the last thoracic vertebra, and ends at the sacrovertebral angle. It is convex anteriorly, the convexity of the lower three vertebrae being much greater than that of the upper two. This curve is described as a lordotic curve.

The sacral curve begins at the sacrovertebral articulation, and ends at the point of the coccyx; its concavity is directed downward and forward as a kyphotic curve.

The thoracic and sacral kyphotic curves are termed primary curves, because they are present in the fetus. The cervical and lumbar curves are compensatory or secondary, and are developed after birth. The cervical curve forms when the infant is able to hold up its head (at three or four months) and to sit upright (at nine months). The lumbar curve forms later from twelve to eighteen months, when the child begins to walk.

When viewed from in front, the width of the bodies of the vertebrae is seen to increase from the second cervical to the first thoracic; there is then a slight diminution in the next three vertebrae; below this there is again a gradual and progressive increase in width as low as the sacrovertebral angle. From this point there is a rapid diminution, to the apex of the coccyx.[4]

The sides of the vertebral column are separated from the posterior surface by the articular processes in the cervical and thoracic regions, and by the transverse processes in the lumbar region. In the thoracic region, the sides of the bodies of the vertebrae are marked in the back by the facets for articulation with the heads of the ribs. More posteriorly are the intervertebral foramina, formed by the juxtaposition of the vertebral notches, oval in shape, smallest in the cervical and upper part of the thoracic regions, and gradually increasing in size to the last lumbar. They transmit the special spinal nerves and are situated between the transverse processes in the cervical region, and in front of them in the thoracic and lumbar regions.[4]

Anatomy of a vertebra

Above and below each vertebrae are joints called facet joints. These restrict the range of movement possible, and are joined by a thin portion of the neural arch called the pars interarticularis. In between each pair of vertebrae are two small holes called intervertebral foramina. The spinal nerves leave the spinal cord through these holes.

The striking segmented pattern of the spine is established during embryogenesis when somites, are rhythmically added to the posterior of the embryo. Somite formation begins around the third week when the embryo begins gastrulation and continues until around 52 somites are formed. The somites are spheres, formed from the paraxial mesoderm that lies at the sides of the neural tube and they contain the precursors of spinal bone, the vertebrae ribs and some of the skull, as well as muscle, ligaments and skin. Somitogenesis and the subsequent distribution of somites is controlled by a clock and wavefront model acting in cells of the paraxial mesoderm. Soon after their formation, sclerotomes, which give rise to some of the bone of the skull, the vertebrae and ribs, migrate, leaving the remainder of the somite now termed a dermamyotome behind. This then splits to give the myotomes which will form the muscles and dermatomes which will form the skin of the back. Sclerotomes become subvidided into an anterior and a posterior compartment. This subdivision plays a key role in the definitive patterning of vertebrae that form when the posterior part of one somite fuses to the anterior part of the consecutive somite during a process termed resegmentation. Disruption of the somitogenesis process in humans results in diseases such as congenital scoliosis. So far, the human homologues of three genes associated to the mouse segmentation clock, (MESP2, DLL3 and LFNG), have been shown to be mutated in cases of congenital scoliosis, suggesting that the mechanisms involved in vertebral segmentation are conserved across vertebrates. In humans the first four somites are incorporated in the base of the occipital bone of the skull and the next 33 somites will form the vertebrae, ribs, muscles, ligaments and skin.[5] The remaining posterior somites degenerate. During the fourth week of embryogenesis, the sclerotomes shift their position to surround the spinal cord and the notochord. This column of tissue has a segmented appearance, with alternating areas of dense and less dense areas.

The less dense tissue that separates the sclerotome segments develop into the intervertebral discs. 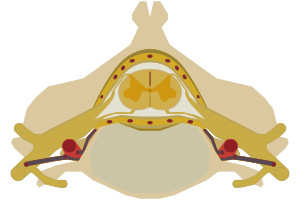 The spinal canal follows the different curves of the column; it is large and triangular in those parts of the column which enjoy the greatest freedom of movement, such as the cervical and lumbar regions; and is small and rounded in the thoracic region, where motion is more limited.[citation needed]

The spinal cord terminates in the conus medullaris and cauda equina.

Spina bifida is a congenital disorder in which there is a defective closure of the vertebral arch. Sometimes the spinal meninges and also the spinal cord can protrude through this, and this is called Spina bifida cystica. Where the condition does not involve this protrusion it is known as Spina bifida occulta. Sometimes all of the vertebral arches may remain incomplete.[6] Another, though rare, congenital disease is Klippel-Feil syndrome which is the fusion of any two of the cervical vertebrae.

Spinal disc herniation, more commonly called a "slipped disc", is the result of a tear in the outer ring (anulus fibrosus) of the intervertebral disc, which lets some of the soft gel-like material, the nucleus pulposus, bulge out in a hernia.

Pain at the coccyx (tailbone) is known as coccydynia.[7]

Excessive or abnormal spinal curvature is classed as a spinal disease or dorsopathy and includes the following abnormal curvatures: 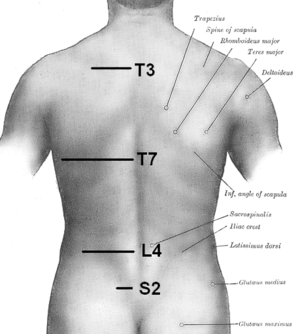 Orientation of vertebral column on surface. T3 is at level of medial part of spine of scapula T7 is at inferior angle of the scapula. L4 is at highest point of iliac crest. S2 is at the level of posterior superior iliac spine. Furthermore, C7 is easily localized as a prominence at the lower part of the neck.[8]

Individual vertebrae of the human vertebral column can be felt and used as surface anatomy. This provides anatomical landmarks that can be used to guide procedures such as lumbar puncture and also as a reference point to describe the locations of other parts of human anatomy, such as the positions of organs.