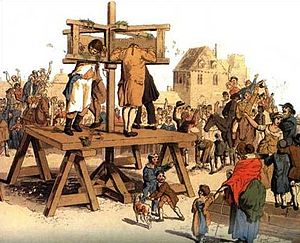 The Pillory, from The Costume of Great Britain (1805)

Humiliation is the abasement of pride, which creates mortification or leads to a state of being humbled or reduced to lowliness or submission. It is an emotion felt by a person whose social status has just decreased. It can be brought about through intimidation, physical or mental mistreatment or trickery, or by embarrassment if a person is revealed to have committed a socially or legally unacceptable act. Whereas humility can be sought alone as a means to de-emphasise the ego, humiliation must involve other person(s), though not necessarily directly or willingly. Acting to humiliate oneself may be linked to a personal belief (as with mortification of the flesh, with some religions), or it can be part of erotic humiliation where the belittling activity provides emotional and/or sexual arousal or heightened sensation.

Humiliation is currently an active research topic, and is now seen as an important – and complex – core dynamic in human relationships, having implications at intrapersonal, interpersonal, institutional and international levels.[1]

"Humiliation is impotence, an emotion that stems above all from the feeling that you are no longer in control of your life either collectively, as a people, a nation, or a religious community, or individually, as a single person."

The primary source of cultural humiliation is colonialism. Secondary sources are the Holocaust, the creation of Israel (for Muslim and Middle Eastern populations) and infinite factors of social integration.

Specific cases are the nonacceptance of the Nuclear program of Iran and the help from the West in the Grand Mosque Seizure.

All of these factors can possibly lead to the humiliating act for many social populations of terrorism.[2] 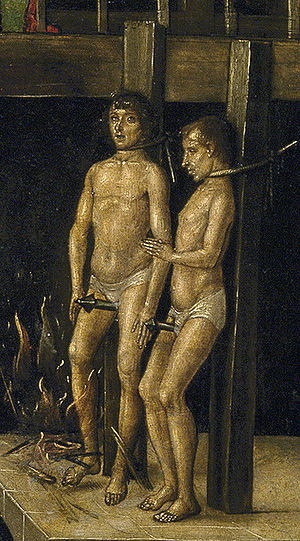 Non-trinitarian Cathars being burnt at the stake in an auto-de-fé (c. 1495, with garrote and phallus), presided over by Saint Dominic, oil on panel by Pedro Berruguete. 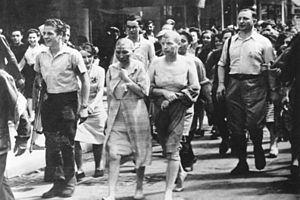 Paris 1944: Women accused of collaboration with Nazis are paraded through the streets barefoot, shaved, and with swastika burnmarks on their faces

Humiliating of one person by another (the humiliator) is often used as a way of asserting power over them, and is a common form of oppression or abuse used in a police, military, or prison context during legal interrogations or illegal torture sessions. Many now-obsolete public punishments were deliberately designed to be humiliating, e.g. tarring and feathering lawbreakers, pillory, "mark of shame" (stigma) as a means of "making an example" of a person and presenting a deterrent to others. Some practices, such as tarring and feathering, became tools of unofficial mob justice. In folk customs such as the English skimmington rides and rough music (and their continental equivalents, such as the French Charivari), dramatic public demonstrations of moral disapproval were enacted to humiliate transgressors and drive them out of the community.[3]

Some states in America have experimented with humiliating or shaming lawbreakers by publishing their names and indicating their offense (e.g., with soliciting prostitutes or drinking and driving). In 2010, there was public outcry about reports showing police in Dongguan, Guangdong, China leading a parade of arrested prostitutes for the purpose of humiliating them. The national Ministry of Public Security reprimanded the local police and affirmed that such punishments are not allowed.[4] 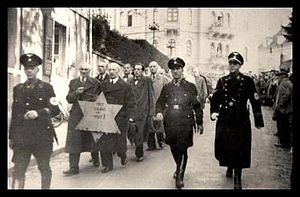 Hazing is an often ritualistic test and a task, which may constitute harassment, abuse or humiliation with requirements to perform random, often meaningless tasks, sometimes as a way of initiation into a social group. The definition can refer to either physical (sometimes violent) or mental (possibly degrading) practices; it may also include an 'erotic' element (notably nudity). Often most or all of the endurance, or at least the more serious ordeal, is concentrated in an orgiastic collective session, which may be called hell night, or prolonged to a hell week and/or retreat or camp, sometimes again at the pledge's birthday (e.g. by birthday spanking), but some traditions keep terrorizing pledges (a common term for the initiation candidates; alternative terms include newbie, rookie, mainly in athletic teams, and freshman) over a long period, resembling fagging. Hazing is often used as a method to promote group loyalty and camaraderie through shared suffering (male bonding in fraternities), either with fellow participants, past participants or both.

Hazing has been reported in a variety of social contexts, including sports teams, academic fraternities and sororities (see fraternities and sororities); high schools (in the sense of secondary education); college and universities; groups, like competition teams, fan clubs, social groups; secret societies and even certain service clubs; competitive sports teams; and armed forces. It is a subjective matter where to draw to line between "normal" hazing (somewhat abusive) and a mere rite of passage (essentially bonding; proponents may argue they can coincide), and there is a gray area where exactly the other side passes over into sheer degrading, even harmful abuse that should not be tolerated even if accepted voluntarily (serious but avoidable accidents do still happen; deliberate abuse with similar grave medical consequences occurs, in some traditions rather often). In military circles hazing is sometimes assumed to test recruits under situations of stress and hostility. Although in no way a recreation of combat, hazing does put people into stressful situations that they are unable to control, which allegedly should weed out those weaker members prior to being put in situations where failure to perform will cost lives.

Reported hazing activities can involve all kinds of ridicule and humiliation within the group or in public — many of which could easily be considered[by whom?] abusive if a candidate were not a consenting adult — while others are quite innocent, akin to pranks. Examples of hazing, often performed in combination, include Spanking; tickling; being hosed by sprinkler, buckets or hoses; covered with dirt or with (sometimes rotten) food; engaging in lengthy, tedious cleaning of toilets; waiting on others; being made to eat or drink too much (to the point of intoxication and vomiting); wearing humiliating clothing such as diapers, underwear, an apron, jockstrap, loincloth or duct tape; performing calisthenics and other physical tests. In the May issue of the American Journal of Emergency Medicine, Michelle Finkel, MD, reported that hazing injuries are often not recognized for their true cause in emergency medical centers. The doctor said hazing victims sometimes hide the real cause of injuries out of shame or to protect those who caused the harm. In protecting their abusers, hazing victims can be compared with victims of domestic violence. 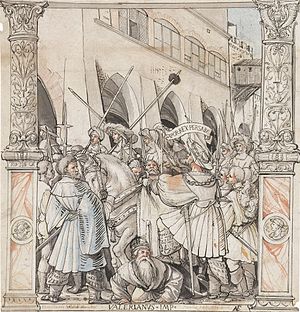 The Humiliation of Emperor Valerian by Shapur, King of Persia by Hans Holbein the Younger.

Donald Klein described humiliation as "a powerful factor in human affairs that has, for a variety of reasons, been overlooked by students of individual and collective behavior. It is a pervasive and all too destructive influence in the behavior of individuals, groups, organizations, and nations."[5]

Though it is a subjective emotion, humiliation has a universal aspect which applies to all human beings: "it is the feeling of being put down, made to feel less than one feels oneself to be."[1]

Feelings of humiliation can produce 'humiliated fury'[6] which, when turned inward can result in apathy and depression, and when turned outward can give rise to paranoia, sadistic behaviour and fantasies of revenge. Klein explains, "When it is outwardly directed, humiliated fury unfortunately creates additional victims, often including innocent bystanders ... . When it is inwardly directed, the resulting self-hate renders victims incapable of meeting their own needs, let alone having energy available to love and care for others." He goes on to say, "In either case, those who are consumed by humiliated fury are absorbed in themselves or their cause, wrapped in wounded pride..."[5]