The Huntington-Ashland-Ironton metropolitan area is the largest MSA in West Virginia. The United States metropolitan area includes seven counties across three states: West Virginia, Kentucky, and Ohio. New definitions from February 28, 2013 placed the population at 365,419.[3] The MSA is nestled along the banks of the Ohio River within the Appalachian Plateau region. The area is most often referred to locally as the Tri-State region. Sometimes it is also referred to by the acronym KYOVA (KentuckY, Ohio, West VirginiA). In addition, the three largest cities (Huntington, West Virginia; Ashland, Kentucky; and Ironton, Ohio) are referred to locally as the River Cities.

Places with fewer than 1,000 inhabitants 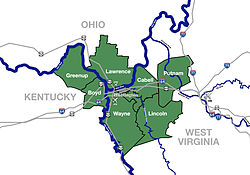 The Huntington-Ashland MSA from a state-level zoom

In 2008, an Associated Press article designated the Huntington-Ashland metropolitan area as the unhealthiest in America, based on its analysis of data collected in 2006 by the Centers for Disease Control and Prevention. Nearly half the adults in this metropolitan area were obese.[10] 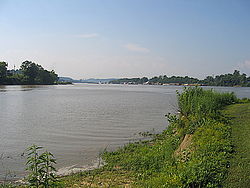 Virginia Point Park in Kenova, West Virginia. Two rivers, the Big Sandy (left) and Ohio (right) Rivers, as well as shores in the states of Kentucky (back left) and Ohio (back right) can be seen.

The following prefixes are used for long-distance phone service dialing to the region within the MSA.