The Hussites (Czech: Husité or Kališníci; "Chalice People") were a Christian movement following the teachings of Czech reformer Jan Hus (c. 1369–1415), who became the best-known representative of the Bohemian Reformation and one of the forerunners of the Protestant Reformation. This predominantly religious movement was propelled by social issues and strengthened Czech national awareness.

After the Council of Constance lured Jan Hus in with a letter of indemnity, then tried him for heresy and put him to death at the stake on 6 July 1415,[1] the Hussites fought the Hussite Wars (1420–1434) for their religious and political cause.

Among present-day Christians, Hussite traditions are represented in the Moravian Church, Unity of the Brethren, and the refounded Czechoslovak Hussite churches.[2]

Impact of Hus's death on Bohemia 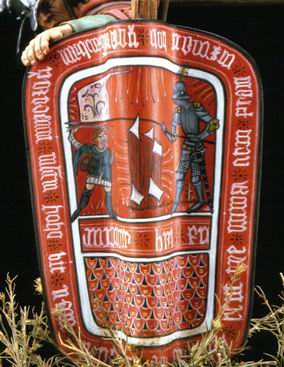 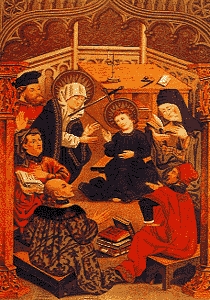 The arrest of Hus in 1414 caused considerable resentment in Czech lands. The authorities of both countries appealed urgently and repeatedly to King Sigismund to release Jan Hus.

When news of his death at the Council of Constance in 1415 arrived, disturbances broke out, directed primarily against the clergy and especially against the monks. Even the Archbishop narrowly escaped from the effects of this popular anger. The treatment of Hus was felt to be a disgrace inflicted upon the whole country and his death was seen as a criminal act. King Wenceslaus, prompted by his grudge against Sigismund, at first gave free vent to his indignation at the course of events in Constance. His wife openly favoured the friends of Hus. Avowed Hussites stood at the head of the government.

A league was formed by certain lords,[who?] who pledged themselves to protect the free preaching of the Gospel upon all their possessions and estates and to obey the power of the Bishops only where their orders accorded with the injunctions of the Bible. The university would arbitrate any disputed points. The entire Hussite nobility joined the league. Other than verbal protest of the council's treatment of Hus, there was little evidence of any actions taken by the nobility until 1417. At that point several of the lesser nobility and some barons, signatories of the 1415 protest letter, removed Romanist priests from their parishes, replacing them with priests willing to give communion in both wine and bread. The chalice of wine became the central identifying symbol of the Hussite movement.[3] If the king had joined, its resolutions would have received the sanction of the law; but he refused, and approached the newly formed Roman Catholic League of lords, whose members pledged themselves to support the king, the Catholic Church, and the Council. The prospect of a civil war began to emerge.

Pope Martin V as Cardinal Otto of Colonna had attacked Hus with relentless severity. He energetically resumed the battle against Hus's teaching after the enactments of the Council of Constance. He wished to eradicate completely the doctrine of Hus, for which purpose the co-operation of King Wenceslaus had to be obtained.[citation needed] In 1418, Sigismund succeeded in winning his brother over to the standpoint of the council by pointing out the inevitability of a religious war if the heretics in Bohemia found further protection.[citation needed] Hussite statesmen and army leaders had to leave the country and Roman Catholic priests were reinstated. These measures caused a general commotion which hastened the death of King Wenceslaus by a paralytic stroke in 1419.[citation needed] His heir was Sigismund.

The parties of the Bohemian Hussites

Hussism organised itself during the years 1415–1419. From the beginning, there formed two parties, with a smaller number of people withdrawing from both parties around the pacifist Petr Chelčický, whose teachings would form the foundation of the Unitas Fratrum.

The moderate party, who followed Hus more closely, sought to conduct reform while leaving the whole hierarchical and liturgical order of the Church untouched.

The more radical party[clarification needed] identified itself more boldly with the doctrines of John Wycliffe, sharing his passionate hatred of the monastic clergy, and his desire to return the Church to its supposed condition during the time of the apostles. This required the removal of the existing hierarchy and the secularisation of ecclesiastical possessions. The radicals preached the "sufficientia legis Christi"—the divine law (i.e. the Bible) is the sole rule and canon for human society, not only in the church, but also in political and civil matters. They rejected therefore, as early as 1416, everything that they believed had no basis in the Bible, such as the veneration of saints and images, fasts, superfluous holidays, the oath, intercession for the dead, auricular Confession, indulgences, the sacraments of Confirmation and the Anointing of the Sick; they admitted laymen and women[citation needed] to the preacher's office, and chose their own priests. But above all they clung to Wycliffe's doctrine of the Lord's Supper, denying transubstantiation, and this is the principal point by which they are distinguished from the moderate party.

The programme of the more conservative Hussites (the moderate party) is contained in the Four Articles of Prague, which were agreed upon in July 1420, and promulgated in the Latin, Czech, and German languages. The full text is about two pages long, but they are often summarized as:

The views of the moderate Hussites were widely represented at the University and among the citizens of Prague; they were therefore called the Prague Party, but also Calixtines (Latin calix chalice) or Utraquists (Latin utraque both), because they emphasized the second article of Prague, and the chalice became their emblem.

The radicals (the radical party) had their gathering-places all around the country. Their first armed assault fell on the small town of Ústí, on the river Lužnice, south of Prague (today's Sezimovo Ústí). However, as the place did not prove to be defensible, they settled in the remains of an older town upon a hill not far away and founded a new town, which they named Tábor (after the traditional name of the mountain on which Jesus was expected to return; see Mark 13); hence they were called Táborité (Taborites). They comprised the essential force of the radical Hussites. Their aim was to destroy the enemies of the law of God, and to defend his kingdom (which had been expected to come in a short time) by the sword. Their end-of-world visions did not come true. In order to preserve their settlement and spread their ideology, they waged bloody wars; in the beginning they observed a strict regime, inflicting the severest punishment equally for murder, as for less severe faults as adultery, perjury and usury, and also tried to apply rigid Biblical standards to the social order of the time. The Taborites usually had the support of the Orebites (later called Orphans), an eastern Bohemian sect of Hussitism based in Hradec Králové. 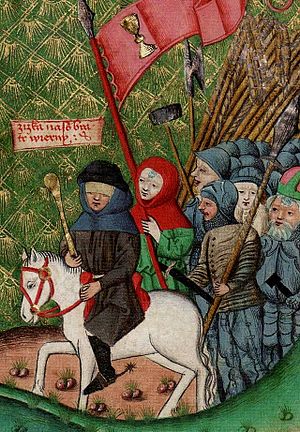 The news of the death of King Wenceslaus in 1419 produced a great commotion among the people of Prague. A revolution swept over the country: churches and monasteries were destroyed, and church property was seized by the Hussite nobility. Sigismund could get possession of his kingdom only by force of arms. Pope Martin V called upon Catholics of the West to take up arms against the Hussites, declaring a crusade, and there followed twelve years of warfare.

The Hussites initially campaigned defensively, but after 1427, they assumed the offensive. Apart from their religious aims, they fought for the national interests of the Czechs. The moderate and radical parties were united and they not only repelled the attacks of the army of crusaders, but crossed the borders into neighboring countries. On March 23, 1430, Joan of Arc dictated a letter[4] that threatened to lead a crusading army against the Hussites unless they returned to the Catholic faith, but her capture by English and Burgundian troops two months later would keep her from carrying out this threat.

The Council of Basel and Compacta of Prague

Eventually, the opponents of the Hussites found themselves forced to consider an amicable settlement. They invited a Bohemian embassy to appear at the Council of Basel. The discussions began on 10 January 1432, centering chiefly on the four articles of Prague. No agreement emerged. After repeated negotiations between the Basel Council and Bohemia, a Bohemian–Moravian state assembly in Prague accepted the "Compacta" of Prague on 30 November 1433. The agreement granted communion in both kinds to all who desired it, but with the understanding that Christ was entirely present in each kind. Free preaching was granted conditionally: the Church hierarchy had to approve and place priests, and the power of the bishop must be considered. The article which prohibited the secular power of the clergy was almost reversed.

The Taborites refused to conform. The Calixtines united with the Roman Catholics and destroyed the Taborites at the Battle of Lipany on (30 May 1434). From that time, the Taborites lost their importance, though the Hussite movement would continue in Poland for another five years, until the Royalist forces of Poland defeated the Polish Hussites at the Battle of Grotniki. The state assembly of Jihlava in 1436 confirmed the "Compacta" and gave them the sanction of law. This accomplished the reconciliation of Bohemia with Rome and the Western Church, and at last Sigismund obtained possession of the Bohemian crown. His reactionary measures caused a ferment in the whole country, but he died in 1437. The state assembly in Prague rejected Wyclif's doctrine of the Lord's Supper, which was obnoxious to the Utraquists, as heresy in 1444. Most of the Taborites now went over to the party of the Utraquists; the rest joined the "Brothers of the Law of Christ" (Latin: "Unitas Fratrum") (see Unity of the Brethren; also Bohemian Brethren and Moravian Church).

Reorganisation of the Hussites

In 1462, Pope Pius II declared the "Compacta" null and void, prohibited communion in both kinds, and acknowledged King George of Podebrady as king on condition that he would promise an unconditional harmony with the Roman Church. This he refused, but his successor, King Vladislaus II, favored the Roman Catholics and proceeded against some zealous clergymen of the Calixtines. The troubles of the Utraquists increased from year to year. In 1485, at the Diet of Kutná Hora, an agreement was made between the Roman Catholics and Utraquists which lasted for thirty-one years. It was only later, at the Diet of 1512, that the equal rights of both religions were permanently established. Luther's appearance was hailed by the Utraquist clergy, and Martin Luther himself was astonished to find so many points of agreement between the doctrines of Hus and his own. But not all Utraquists approved of the German Reformation; a schism arose among them, and many returned to the Roman doctrine, while other elements had organised the "Unitas Fratrum" already in 1457.

Under Emperor Maximilian II, the Bohemian state assembly established the "Confessio Bohemica," upon which Lutherans, Reformed, and Bohemian Brethren agreed. From that time forward Hussitism began to die out. After the Battle of White Mountain on 8 November 1620 the Roman Catholic Faith was re-established with vigour which fundamentally changed the religious conditions of the Czech lands.

Leaders and members of Unitas Fratrum were forced to choose to either leave the many and varied southeastern principalities of what was the Holy Roman Empire (mainly Austria, Hungary, Bohemia, Moravia and parts of Germany and its many states), or to practice their beliefs secretly. As a result, members were forced underground and dispersed across northwestern Europe. The largest remaining communities of the Brethren were located in Lissa (Leszno) in Poland, which had historically strong ties with the Czechs, and in small, isolated groups in Moravia. Some, among them Jan Amos Comenius, fled to western Europe, mainly the Low Countries. A settlement of Hussites in Herrnhut, Saxony, now Germany, in 1722 caused the emergence of the Moravian Church.

Today, the Czechoslovak Hussite Church claims to be the modern successor of the Hussite tradition.[2]