The Hyde Park Barracks Museum is a brick building and compound designed by convict architect Francis Greenway between 1818–19; originally built at the head of Macquarie Street (1819) to house convict men and boys.

The site is managed by the Historic Houses Trust of New South Wales as a museum open to the public for a modest fee. The site is listed on New South Wales' State[2] and Australian National Heritage registers, and is inscribed on the UNESCO World Heritage List as one of 11 pre-eminent Australian Convict Sites[3] as amongst "the best surviving examples of large-scale convict transportation and the colonial expansion of European powers through the presence and labour of convicts." [4][5] 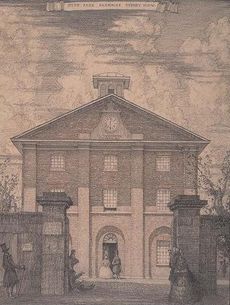 Hyde Park Barracks in a 1914 drawing by William Hardy Wilson

Constructed by convict labour by order of Governor Lachlan Macquarie, the Barracks is one of the most familiar works of the accomplished colonial England-born, Australian architect Francis Greenway. As the principal male convict barracks in New South Wales it provided lodgings for convicts working in government employment around Sydney until its closure in mid-1848.

It has had many occupants since then. It was an Immigration Depot for single female immigrants seeking work as domestic servants and awaiting family reunion from 1848 to 1886 and also a female asylum from 1862 to 1886. From 1887 to 1979 law courts and government offices were based at the Barracks. Construction began in 1817.

In June 2015, Mark Speakman the Minister for the Environment of New South Wales announced Unlocking Heritage, a two-year program aimed at giving children the opportunity to experience Sydney's living museums. This program will allow students to wear convict clothing and sleep in the Barrack's hammocks. A million dollars has been allocated for this program. Museum director Mark Goggin thinks that children will learn more about history if they can experience it hands-on, '"Particularly for the kids to wear the convict shirts, eat the gruel, sleep over with their mates in hammocks and imagining what life was like 200 years ago."' The program is starting out with children and hoping to expand to adult participation.[6]

In July 2010, at the 34th session of the UNESCO World Heritage Committee, the Hyde Park Barracks and ten other Australian sites with a significant association with convict transportation were inscribed as a group on the World Heritage List as the Australian Convict Sites.[7] The listing explains that the 11 sites present "the best surviving examples of large-scale convict transportation and the colonial expansion of European powers through the presence and labour of convicts". Of the 11 sites the Old Great North Road, Old Government House at Parramatta and Cockatoo Island are also within the Sydney region.

According to the Living Museum website, the fees for admission as of 2015 are $10 for adult admission, $5 for children or commissions, $20 for families (two adults and two children) and free to members. Group and school tours are available by phoning the museum. Hours of operation are 10am - 5pm daily. Closed on Christmas and Good Friday. The Hyde Barracks are one fourth of the Sydney Living History Museum series. The other three are the Susannah Place Museum, the Museum of Sydney and the Justice & Police Museum.[8] A pass can be purchased at any of the locations that will enable visitors to visit all four locations at a discounted price. Adults $18, Children and Concessions $9. The pass is valid for three months.[9]