From Infogalactic: the planetary knowledge core
Jump to: navigation, search
For the Iranian band, see Hypernova (band). For the The Browning album, see Hypernova (album). 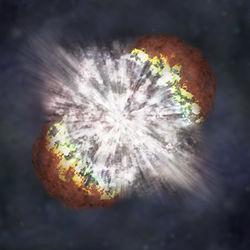 NASA's artist impression of SN 2006gy, one of the most luminous hypernovae seen

A hypernova (pl. hypernovae or hypernovas) is a type of star explosion with an energy substantially higher than that of standard supernovae. An alternative term for most hypernova is "superluminous supernova" (SLSN). Such explosions are thought to be the origin of long-duration gamma-ray bursts.

Just like supernovae in general, hypernovae are produced by several different types of stellar explosion: some well modelled and observed in recent years, some still tentatively suggested for observed hypernovae, and some entirely theoretical. Numerous hypernovae have been observed corresponding to supernovae type Ic and type IIn, and possibly also at least one of type IIb.[1]

The word collapsar, short for collapsed star, was formerly used to refer to the end product of stellar gravitational collapse, a stellar-mass black hole. The word is now sometimes used to refer to a specific model for the collapse of a fast-rotating star, as discussed below.

History of the term

Before the 1990s, the term "hypernova" was used sporadically to describe the theoretical extremely energetic explosions of extremely massive population III stars. It has also been used to describe other extreme energy events, such as mergers of supermassive black holes.

In 1998, a paper suggesting a link between gamma-ray bursts and young massive stars[2] formally proposed to use the term "hypernova" for the visible after-glow from those gamma-ray bursts. The energy of such events was speculated to be up to several hundred times that of known supernovae.

Almost simultaneously, various over-luminous supernovae were being discovered and investigated.[3][4][5][6] These events were described as hypernovae and varied from less than five to around 50 times as energetic as other supernovae and up to 20 times as luminous as a standard type Ia supernova at its peak. This definition has become standard for the term "hypernova", although not all of them are associated with gamma-ray bursts.

Investigation of these types of luminous supernovae suggests that some of them are due to explosions of extremely massive low metallicity stars by the pair instability mechanism, although not with the energies that were speculated for them decades earlier.[7][8]

A nearby gamma-ray burst could destroy life on Earth; however, no likely candidate progenitors are close enough to be a danger. Some have suggested that a gamma-ray burst may have caused the Ordovician–Silurian mass extinction on Earth 440 million years ago, but no categorical evidence for this hypothesis exists.[10]

A wide variety of models have been proposed to explain events an order of magnitude or more greater than standard supernovae. The collapsar and CSM models are widely accepted and a number of events are well-observed. Other models are still only tentatively observed or entirely theoretical. 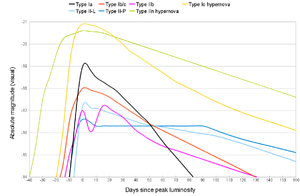 The collapsar model is a type of hypernova that produces a gravitationally collapsed object, or black hole. When core collapse occurs in a star with a core at least around fifteen times the sun's mass (M☉)—though chemical composition and rotational rate are also significant—the explosion energy is insufficient to expel the outer layers of the star, and it will collapse into a black hole without producing a visible supernova outburst.

A star with a core mass slightly below this level—in the range of 5–15 M☉—will undergo a supernova explosion, but so much of the ejected mass falls back onto the core remnant that it still collapses into a black hole. If such a star is rotating slowly, then it will produce a faint supernova, but if the star is rotating quickly enough, then the fallback to the black hole will produce relativistic jets. The energy that these jets transfer into the ejected shell renders the visible outburst substantially more luminous than a standard supernova. The jets also beam high energy particles and gamma rays directly outward and thereby produce x-ray or gamma-ray bursts; the jets can last for several seconds or longer and correspond to long-duration gamma-ray bursts, but they do not appear to explain short-duration gamma-ray bursts.

A star with a 5–15 M☉ core has an approximate total mass of 25–90 M☉ if the star has not undergone mass loss. Such a star will still have a hydrogen envelope and will explode as a type II supernova. Faint type II supernovae have been observed, but no definite candidates for a type II hypernova (except type IIn, which are not thought to be jet supernovae). Only the very lowest metallicity population III stars will reach this stage of their life with little mass loss. Other stars, including most of those visible to us, will have had most of their outer layers blown away by their high luminosity to become a Wolf–Rayet star and will explode as type Ib or type Ic supernovae. Many observed hypernovae are type Ic and those associated with gamma-ray bursts are almost all type Ic, and these are very good candidates for having relativistic jets produced by fallback to a black hole. Not all type Ic hypernovae correspond to observed gamma-ray bursts but the burst would only be visible if one of the jets were aimed towards us.

In recent years a great deal of observational data on long-duration gamma-ray bursts has significantly increased our understanding of these events and made clear that the collapsar model produces explosions that differ only in detail from more or less ordinary supernovae and have energy ranges from approximately normal to around 100 times larger. Nevertheless, they continue sometimes to be referred to in the literature as hypernovae. The word hypernova itself was coined by S.E. Woosley.[11]

A good example of a collapsar hypernova is Sn1998bw,[12] which was associated with the gamma-ray burst GRB 980425. It is classified as a type Ic supernova due to its distinctive spectral properties in the radio spectrum, indicating the presence of relativistic matter.

Almost all observed hypernovae have had spectra similar to either a type Ic or type IIn supernova. The type Ic hypernovae are thought to be produced by jets from fallback to a black hole, but type IIn hypernovae have significantly different light curves and are not associated with gamma-ray bursts. Type IIn supernovae are all embedded in a dense nebula probably expelled from the progenitor star itself, and this circumstellar material (CSM) is thought to be the cause of the extra luminosity.[13] When material expelled in an initial normal supernova explosion meets dense nebular or material or dust close to the star, the shockwave converts kinetic energy efficiently into visible radiation. Thus we see an extremely luminous supernova of extended duration even though the initial explosion energy was the same as that of a normal supernova.

Although any supernova type could potentially produce a type IIn hypernova, given suitable surrounding CSM, the constraints on the size and density of the CSM mean that it will almost always be produced from the star itself immediately prior to the supernova explosion. Such stars are hypergiants and LBVs undergoing substantial mass loss due to Eddington instability, for example SN2005gl.[14]

Another type of hypernova is a pair-instability supernova, of which SN 2006gy[15] may possibly be the first observed example. This supernova event was observed in a galaxy about 238 million light years (73 megaparsecs) from Earth.

The theoretical basis for pair-instability collapse has been known for many decades[16] and was suggested as a dominant source of higher mass elements in the early universe as super-massive population III stars exploded. In a pair-instability supernova, the pair production effect causes a sudden pressure drop in the star's core, leading to a rapid partial collapse. Gravitational potential energy from the collapse causes runaway fusion of the core which entirely destroys the star, leaving no remnant.

Models show that this phenomenon only happens in stars with extreme low metallicity and masses between about 140 and 260 times the Sun, making observing them in the local universe extremely unlikely. Although originally expected to produce hypernova explosions hundreds of times greater than a supernova, current models predict that they actually produce luminosities ranging from about the same as a normal core collapse supernova to perhaps 50 times brighter, although remaining bright for much longer.[17]

Models of the creation and subsequent spin down of a magnetar yield much higher luminosities than regular supernova[18][19] events and match the observed properties[20][21] of at least some hypernovae. In cases where pair-instability supernova may not be a good fit for explaining a hypernova,[22] a magnetar explanation is more plausible.

There are still models for hypernova explosions produced from binary systems, white dwarf or neutron stars in unusual arrangements or undergoing mergers, and some of these are proposed to account for gamma-ray bursts.