From Infogalactic: the planetary knowledge core
Jump to: navigation, search
For other uses, see Image (disambiguation).

IMAGE (from Imager for Magnetopause-to-Aurora Global Exploration), or Explorer 78, was a NASA MIDEX mission that studied the global response of the Earth's magnetosphere to changes in the solar wind. It was launched March 25, 2000 by a Delta II rocket from Vandenberg AFB and ceased operations in December 2005.

The IMAGE craft was placed in a 1,000×46,000 km orbit around the Earth, with an inclination of 90° (passing over the poles) and a 14.2 hour period. IMAGE was the first spacecraft dedicated to observing the magnetosphere of the Earth, and it produced comprehensive global images of plasma in the inner magnetosphere. It did this using five instruments: 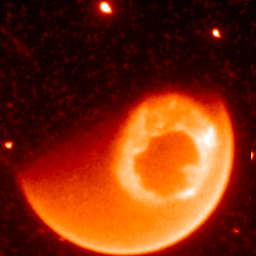 The CIDP as well as the Command & Data Handling Subsystem (main on-board computer) of the craft were built around the mission-proven RAD6000 avionics processors.