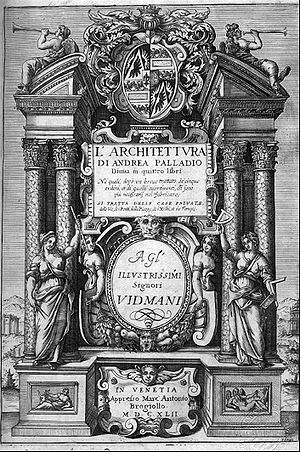 I quattro libri dell'architettura (The Four Books of Architecture) is an Italian treatise on architecture by the architect Andrea Palladio (1508–1580). It was first published in four volumes in 1570 in Venice, illustrated with woodcuts after the author's own drawings. It has been reprinted and translated many times (often in single-volume format). Book I was first published in English in 1663 in a London edition by Godfrey Richards. The first complete English language edition was published in London by the Italian-born architect Giacomo Leoni in 1716-1720.[1]

Palladio founded an architectural movement which takes its name from him, Palladian architecture. I quattro libri dell'architettura contains Palladio's own designs celebrating the purity and simplicity of classical architecture. Some of these ideas had gotten no further than the drawing board while others, for example villa plans, had been successfully built. The book's clarity inspired numerous patrons and other architects. Palladian architecture grew in popularity across Europe and, by the end of the 18th century, had extended as far as North America. Thomas Jefferson, president of the United States, was a keen admirer of Palladio and once referred to the book as "the Bible". The Four Books was used to inform his own work as the architect of Monticello and the University of Virginia and also architect William Buckland's at the 1774 Hammond-Harwood House in Annapolis, Maryland.

Palladio drew inspiration from surviving Roman buildings, Roman authors (especially the architect Vitruvius) and Italian Renaissance architects. However, The Four Books of Architecture provided systematic rules and plans for buildings which were creative and unique. Palladio’s villa style is based on details applied to a structural system built of bricks. He offers two types of general rules in the corpus: design rules (those based on appearance) and construction rules (those based on the logic of villa construction). Here rules of the two types are identified in sets from which sub-sets of identifiers and rules can be written.

Each of the nine rule-sets contains many sub-identities of components and procedures for physical construction. A rule-set such as “Walls”, that identifies five sub-rules based on wall thickness, only needs construction rules; there is no need for rules based on style. In contrast, rules for “Frames” are based on a geometric style of curves and shape proportions. The results will yield clear identities for a shape grammar composition that can be based on physical construction and visual style.

These identities are taken from the first book of architecture and a survey of built villas. These are the nine rule-sets that define identity: 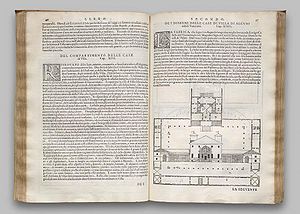