From Infogalactic: the planetary knowledge core
(Redirected from Il-76)
Jump to: navigation, search

The Ilyushin Il-76 (NATO reporting name: Candid) is a multi-purpose four-engine turbofan strategic airlifter designed by the Ilyushin design bureau. It was first planned as a commercial freighter in 1967, as a replacement for the Antonov An-12. It was designed for delivering heavy machinery to remote, poorly served areas of the USSR. Military versions of the Il-76 have seen widespread use in Europe, Asia and Africa, including use as an airborne refueling tanker or as a command center.

The Il-76 has seen extensive service as a commercial freighter for ramp-delivered cargo, especially for outsized or heavy items unable to be otherwise carried. It has also been used as emergency response transport for civilian evacuations as well as for humanitarian/disaster relief aid around the world. Because of its ability to operate from unpaved runways, it has been useful in undeveloped areas. Specialized models have also been produced for aerial fire-fighting and zero-G training.

The aircraft was first conceived by Ilyushin in 1967 to meet a requirement for a freighter able to carry a payload of 40 tons (88,000 lb) over a range of 5,000 km (2,700 nmi; 3,100 mi) in less than six hours, able to operate from short and unprepared airstrips, and capable of coping with the worst weather conditions likely to be experienced in Siberia and the Soviet Union's Arctic regions. It was intended as a replacement for the An-12. Another intended version was a double-decked 250-passenger airliner but that project was cancelled. The Il-76 first flew on March 1971 (1971-03).[4] 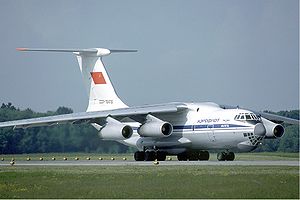 Il-76TD, one of the first variants, at Zurich Airport

Production of Il-76s was allocated to the Tashkent Aviation Production Association in Tashkent, Uzbekistan, then a republic of the Soviet Union. Some 860 of the basic transport variants were manufactured.[5] In the 1990s, modernized variants were developed (MF, TF), with a cargo compartment 20 m long by 3.4 m wide by 3.4 m tall; these larger variants were not produced in significant quantity due to the financial difficulties being experienced by the Russian Air Force, who was the primary operator of the type. The prototype of the Il-76MF, conducted its first flight on 1 August 1995. All production operations ceased during the late 1990s.

From 2004 onwards, a number of aircraft in commercial service were modernized to the Il-76TD-90VD version; this involved the adoption of the newly developed PS-90 engine to comply with European noise limitations.[1] In 2005, the Peoples Republic of China placed an order for 34 new Il-76MDs and 4 Il-78 tankers.[citation needed] In June 2013, Russian military export agency Rosoboronexport announced an order by China for 12 Il-76MD aircraft.[6]

In 2010, it was announced that production of a further modernization of the aircraft, the Il-476, was under consideration; a proposed new production line would be located in Aviastar's facility in Ulyanovsk, Russia, and operated in cooperation with the Tashkent works.[5] At that point, construction work upon two prototype Il-476s had begun at the Ulyanovsk facility.[7] On 29 April 2015, it was reported that the Russian Air Force received the first Il-76MD-90A built at the Ulyanovsk plant “Aviastar-SP” from the 2012 contract for 39 aircraft.[8][9]

The Il-76 has also been modified into an airborne refuelling tanker, designated as the Il-78, around 50 aircraft were produced.[5] A variant of the Il-76 also serves as a fire-fighting waterbomber. Its airframe was used as a base for the Beriev A-50 'Mainstay' AEW&C (airborne early warning and control) aircraft; around 25 aircraft were made.[5] Another application for the type was found in Antarctic support flights and for conducting simulated weightlessness training for cosmonauts.[10] Beriev and NPO Almaz also developed an airborne laser flying laboratory designated A-60, of which two were built, much of this project's details remains classified.[11]

First aircraft were delivered to the Soviet Air Force in June 1974.[1] Next it became the main Soviet strategic transport aircraft. From 1976 it was operated by Aeroflot.

Between 1979 and 1991, the Soviet Air Force Il-76s made 14,700 flights into Afghanistan, transporting 786,200 servicemen, and 315,800 tons of freight. The Il-76 carried 89% of Soviet troops and 74% of the freight that was airlifted. As Afghan rebels were unable to shoot down high-flying Il-76s, their tactics were to try and damage it at take-off or landing. Il-76s were often hit by shoulder-launched Stinger and Strela heat-seeking missiles and large-calibre machine-gun fire, but because the strong airframes were able to take substantial damage and still remain operational, the aircraft had a remarkably low attrition rate during the period of conflict. Building on that experience, the bulk of the Canadian Forces equipment into Afghanistan is flown in using civilian Il-76.[12] In 2006, the Russian Air Force had about 200 Il-76s. Civilian users in Russia have 108.[5]

On August 3, 1995, a Il-76 piloted by a Russian crew was forced down by a Taliban fighter plane sparking the Airstan incident. 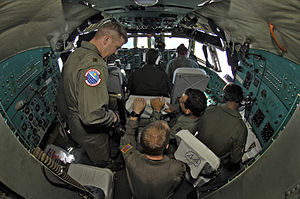 USAF and IAF airmen work inside the cockpit of an Indian Il-76.

On 23 March 2007, a Transaviaexport Il-76 was shot down by an anti-aircraft missile while taking off from Mogadishu, Somalia. Everybody on board, 7 crew and 4 passengers, were killed.[14]

Syrian Air Force Il-76s, operating as civil Syrianair aircraft have been reportedly used to ship weapons, money and other cargo from Russia and Iran to Syria, according to a defected Syrian military pilot. Since the start of the rebellion, in April 2011 (and up to July 2012), around 20 military flights have been conducted to and from Tehran, via Iraqi airspace. Further information exposes that since around 2012, Syrian Il-76s have regularly flown to Moscow's Vnukovo Airport to fetch shipments of Syrian banknotes that have been useful to Bashar al-Assad's regime to survive international sanctions.[15][16][17] 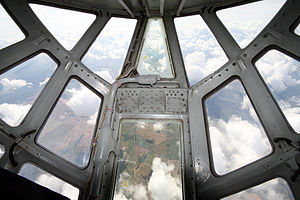 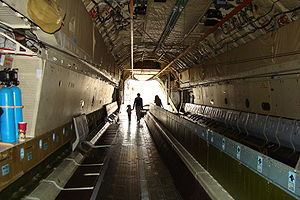 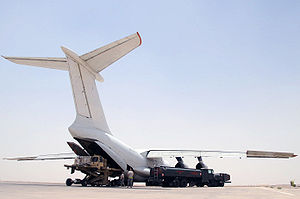 A commercial variant of the Ilyushin Il-76, loading cargo at Ali Air Base, Iraq. 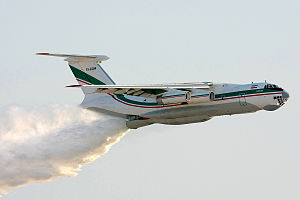 An Il-76TD belonging to the IRGC, used as a firefighting aircraft.

Il-76MGA
Initial Commercial freighter. (2 prototypes and 12 production)
Il-76MD to Il-76TD conversions
Complete removal of Military equipment, identified by crude cover over OBIGGS inlet in Starboard Sponson.
Il-76P / Il-76TP / Il-76TDP / Il-76MDP
Firefighting aircraft. The Il-76 waterbomber is a VAP-2 1.5 hour install/removal tanking kit conversion. The Il-76 can carry up to 13,000 U.S. gallons (49,000 liters) of water; 3.5 times the capacity of the C-130 Hercules. Since this kit can be installed on any Il-76, the designation Il-76TP, Il-76TDP are also used when those versions of the Il-76 are converted into waterbombers. The Il-76P was first unveiled in 1990.

Il-76T
('T' for Transport, Транспортный) unarmed civil cargo transport version. NATO code-name "Candid-A". It first flew on November 4, 1978.
Il-76TD
The civil equivalent of the Il-76MD, first flew in 1982.
Il-76TD-90VD
An Il-76TD with Aviadvigatel PS-90 engines and a partial glass cockpit. It was developed specially for Volga-Dnepr cargo company, which operates 4 aircraft as of 2012.
Il-76TD-S
Civilian mobile Hospital, similar to Il-76MD Skal'pel-MT.
Il-76TF
Civil transport stretched version with Aviadvigatel PS-90 engines. It is the civil version of the Il-76MF (none produced). 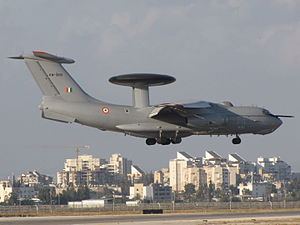 The A-50E/I Mainstay of the Indian Air Force

Beriev A-50E/I
For the Indian Air Force. Hosts Israeli Phalcon radar for AEW&C and Aviadvigatel PS-90 engines.[25]
Il-76MD tanker
Iraqi Air Force tanker conversions.
KJ-2000
Domestic Chinese airborne early warning and control conversion of Il-76, developed after A-50I was cancelled and currently in service with the armed forces of China.
CFTE engine testbed
The China Flight Test Establishment (CFTE) currently operates a flying testbed converted from a Russian-made Il-76MD jet transport aircraft to serve as a flying testbed for future engine development programmes. The first engine to be tested on the aircraft is the WS-10A “Taihang” turbofan, currently being developed as the powerplant for China's indigenous J-10 and J-11 fighter aircraft. Il-76MD #76456, acquired by the AVIC 1 from Russia in the 1990s, is currently based at CFTE’s flight test facility at Yanliang, Shaanxi Province.
Baghdad-1
Iraqi development with a radar mounted in the cargo hold, used in the Iran-Iraq war.
Baghdad-2
Iraqi development (with French assistance) with fibreglass-reinforced plastic radome over the antenna of the Thomson-CSF Tiger G surveillance radar with a maximum detection range of 350 km (189 nmi, 217.5 mi). One was destroyed on the ground during the 1991 Persian Gulf War; two others were flown to Iran where they remained.[26] At least one went into service with the IRIAF. One aircraft crashed following a midair collision with a HESA Saeqeh fighter, during the annual, Iranian military parade in Teheran.[27] It can be distinguished from the Beriev A-50 by having the Il-76 navigator windows in the nose, which the A-50 does not. 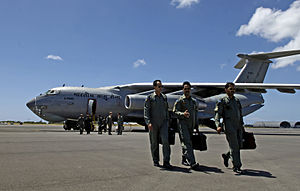 Indian air force pilots walk away from their Il-76 medium cargo jet after landing at Hickam Air Force Base, Hawaii. 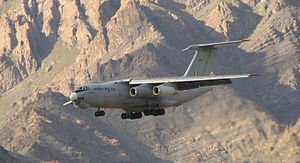 Il-76 of the Indian Air Force lands in Leh, Ladakh. 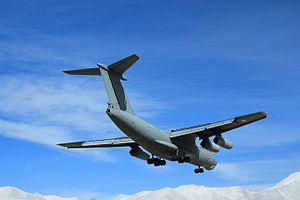 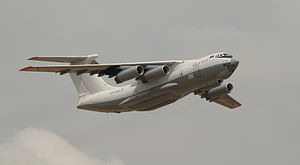 Military and civil operators in 38 countries have operated 850+ Il-76 in large numbers. While Russia is the largest military operator of the Il-76, followed by Ukraine and India, Belarus' TransAVIAexport Airlines is the largest civilian operator.

Democratic Republic of the Congo

Republic of the Congo 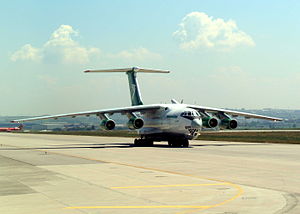 As of August 2015 a total of 75 Il-76 series aircraft have been written-off in crashes and other incidents,[43] including the following: 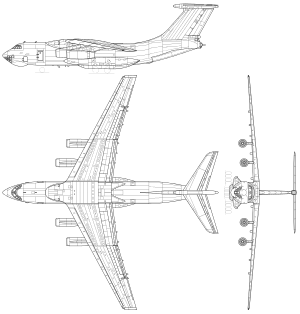