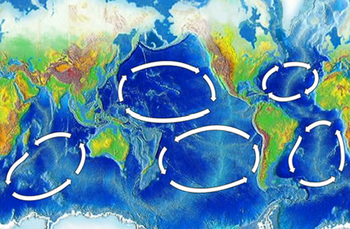 There are trash vortices in each of the five major oceanic gyres. 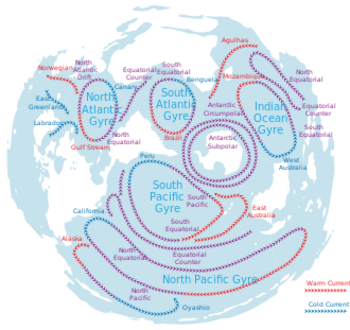 The Indian Ocean garbage patch, discovered in 2010, is a gyre of marine litter suspended in the upper water column of the central Indian Ocean, specifically the Indian Ocean Gyre, one of the five major oceanic gyres.[1][2][3][4][5] The patch does not appear as a continuous debris field. As with other patches in each of the five oceanic gyres, the plastics in it break down to ever smaller particles, and to constituent polymers.[6] As with the other patches, the field constitutes an elevated level of pelagic plastics, chemical sludge, and other debris; primarily particles that are invisible to the naked eye.[7][8][9]

A similar patch of floating plastic debris in the Pacific Ocean, the Great Pacific garbage patch, was predicted in 1985, and discovered in 1997 by Charles J. Moore as he passed through the North Pacific Gyre on his return from the Transpacific Yacht Race. The North Atlantic garbage patch was discovered in 2010.[10][11]

The existence of the Great Pacific garbage patch, the first to be discovered, was predicted in a 1988 paper published by the National Oceanic and Atmospheric Administration (NOAA) of the United States. The prediction was based on results obtained by several Alaska-based researchers between 1985 and 1988 that measured neustonic plastic in the North Pacific Ocean.[12]

On April 11, 2013, in order to create awareness, artist Maria Cristina Finucci founded The garbage patch state at UNESCO[13] –Paris in front of Director General Irina Bokova, the first of a series of events under the patronage of UNESCO and of Italian Ministry of the Environment.[14]