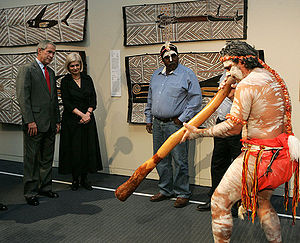 Performance of Aboriginal song and dance in the Australian National Maritime Museum in Sydney. 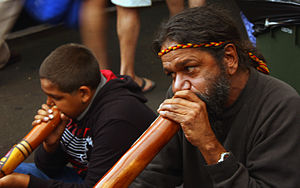 A didgeridoo is a type of musical instrument that, according to western musicological classification, falls into the category of aerophone. It is one of the oldest instruments to date. It consists of a long tube, without finger holes, through which the player blows. It is sometimes fitted with a mouthpiece of beeswax. Didgeridoos are traditionally made of eucalyptus, but contemporary materials such as PVC piping are used. In traditional situations it is played only by men, usually as an accompaniment to ceremonial or recreational singing, or, much more rarely, as a solo instrument. Skilled players use the technique of circular breathing to achieve a continuous sound, and also employ techniques for inducing multiple harmonic resonances. Although traditionally the instrument was not widespread around the country - it was only used by Aboriginal groups in the most northerly areas - today it is commonly considered the national instrument of the Australian Aborigines and is world-renowned as a unique and iconic instrument. Famous players include Djalu Gurruwiwi, Mark Atkins, William Barton, David Hudson, Joe Geia and Shane Underwood as well as white virtuoso Charlie McMahon.

A clapstick is a type of musical instrument that, according to western musicological classification, falls into the category of percussion. Unlike drumsticks, which are generally used to strike a drum, clapsticks are intended for striking one stick on another. They are of oval shape with paintings of snakes, lizards, birds and more.

Bunggul is a style of music that came into being around the Mann River and is known for its intense lyrics, which are often stories of epic journeys and continue, or repeat, unaccompanied after the music has stopped.

A particular clan in Aboriginal culture may share songs, known as emeba (Groote Eylandt), fjatpangarri (Yirrkala), manikay (Arnhem Land) or other native terms. Songs are about clan or family history and are frequently updated to take into account popular films and music, controversies and social relationships.

Songlines ("Yiri" in the Walpiri language) relate to Dreamtime, with oral lore and storytelling manifested in an intricate series of song cycles that identified landmarks and other items and tracking (hunting) mechanisms for navigation. These songs often described how the features of the land were created and named during the Dreamtime. By singing the songs in the appropriate order, Indigenous Australians could navigate vast distances often traveling through the deserts of Australia's interior. They relate the holder or the keeper of the song (or Dreamtime story) with an inherent obligation and reciprocity with the land.

Kun-borrk came into being around the Adelaide, Mann and Rose Rivers, distinguished by a didgeridoo introduction followed by the percussion and vocals, which often conclude words (in contrast to many other syllabic styles of Aboriginal singing).

Wangga came into being near the South Alligator River and is distinguished by an extremely high note to commence the song, accompanied by rhythmic percussion and followed by a sudden shift to a low tone. It is typically performed by one or two singers with clapsticks and one didgeridoo player. It is most often performed at circumcision ceremonies and at ceremonies in which a dead person's belongings are purified with smoke. 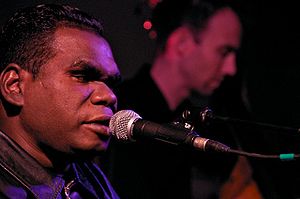 A number of Indigenous Australians have achieved mainstream prominence, such as Jimmy Little (pop), Yothu Yindi (Australian aboriginal rock), Troy Cassar-Daley (country) and NoKTuRNL (rap metal), the Warumpi Band (alternative or world music) Indigenous music has also had broad exposure through the world music movement and in particular WOMADelaide. Geoffrey Gurrumul Yunupingu (formerly of Yothu Yindi) has attained international success singing contemporary music in English and in the language of the Yolngu.

Contemporary Indigenous music continues the earlier traditions and also represents a fusion with contemporary mainstream styles of music, such as rock and country music. The Deadlys provide an illustration of this with rock, country, pop being found among the styles played. Common traditional instrumentation used are the didjeridu and clapsticks being used to give a different feel to the music.

Country music has been particularly popular among the Australian Aboriginal and Torres Strait Islander peoples, as documented in Clinton Walker's seminal Buried Country. Dougie Young and Jimmy Little were pioneers and Troy Cassar-Daley is among Australia's successful contemporary Indigenous performers. Aboriginal artists Kev Carmody and Archie Roach employ a combination of folk-rock and country music to sing about Aboriginal rights issues.[7] The song type falls under the category of barnt. The documentary, book and soundtrack Buried Country showcases significant Indigenous musicians from the 1940s to the 1990s.[8]

The movie Wrong Side of the Road and soundtrack (1981) gave broad exposure to the bands Us Mob and No Fixed Address and highlighted Indigenous disadvantage in urban Australia.

There are a number of Aboriginal exponents of Australian hip hop music.[9]

In 1997 the State and Federal Governments set up the Aboriginal Centre for the Performing Arts (ACPA) as an elite National Institute to preserve and nurture aboriginal music and talent across all styles and genres from traditional to contemporary.