Indrabhuti Gautama was the Ganadhara (chief disciple) of Mahavira, the 24th and last Jain Tirthankara of present half cycle of time.[1] He is also referred to as Gautam Gandhar.

His birth name was Indrabhuti Gautama. He was commonly referred by his gotra, Gautama. He is often referred to as Goyama in Prakrit scriptures.

He was born in the Gochchar village in the Magadha kingdom to a Brahmin couple, Vasubhuti and Prithvi.

According to Shatkhandagama, the digambara scripture, the Indra, pretending to be a medicant, approached Indrabhuti. The Indra asked him to explain the meaning of a verse:

When he was unable to explain the verse, the Indra advised him to visit the samavasarana of Lord Mahavira so that he can learn the meaning of the verse. As he was approaching the set of Lord Mahavira at his gandhakuti, he saw the lofty manastambha (the column of pride). Seeing the manastambha, his pride vanished and he was filled with humility. He became the chief disciple of Lord Mahavira at the age of 50. The day he took diksha is celebrated as Guru Purnima.[citation needed] His brothers Agnibhuti and Vayubhuti, both scholars of distinction, also became Ganadharas of Lord Mahavira.

According to the elaboration of Debate with the Ganadhara by Jinabhadra, the learned Brahmin Gautama summoned the gods to a great sacrifice but instead they flew off to hear Mahāvīra preaching at his second samavasarana near by.[2] In fury, Gautama confronted Mahavira in debate, as did ten other brahmins in succession, with the fordmaker converting them all by a demonstration, underpinned by his claim to omniscience.[2] 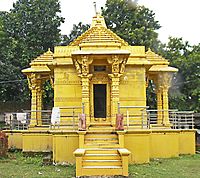 Gautama is connected with prosperity as he fed some monks using his magical powers.[4]

Svetambaras write Gautama's name in new account books as a sign of auspiciousness in the new year.[4]

Gautama is mentioned in the Exposition of Explainations, as an interpreter of Mahavira.[2] It is further mentioned that they have been friends in their previous incarnations and will attain moksha in the one which they are now.[2]