Inner Seas off the West Coast of Scotland 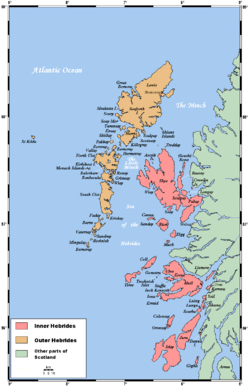 The Inner Seas off the West Coast of Scotland is a marine area designated by the International Hydrographic Organization (IHO). It consists of a number of waterbodies between the Scottish mainland, the Outer Hebrides islands, and the coast of Northern Ireland.

The IHO defines the limits of the Inner Seas as follows:[1]

On the West and North. A line running from Bloody Foreland (Lua error in Module:Coordinates at line 668: callParserFunction: function "#coordinates" was not found.) in Ireland to the West point of Tory Island, on to Barra Head, the Southwest point of the Hebrides, thence through these islands, in such a manner that the West coasts of the main islands appertain to the Atlantic Ocean and all the narrow waters appertain to the Inner Seas, as far as the Butt of Lewis (North Point), and thence to Cape Wrath (58°37'N) in Scotland.

On the South. A line joining the South extreme of the Mull of Galloway (54°38'N) in Scotland and Ballyquintin Point (54°20'N) in Ireland.