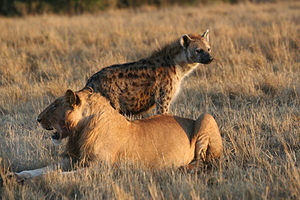 Subadult male lion and spotted hyena in the Masai Mara. The two species share the same ecological niche, and are thus in competition with each other.

If a tree species in a dense forest grows taller than surrounding tree species, it is able to absorb more of the incoming sunlight. However, less sunlight is then available for the trees that are shaded by the taller tree, thus interspecific competition. Leopards and lions can also be in interspecific competition, since both species feed on the same prey, and can be negatively impacted by the presence of the other because they will have less food.

Competition is only one of many interacting biotic and abiotic factors that affect community structure. Moreover, competition is not always a straightforward, direct, interaction. Interspecific competition may occur when individuals of two separate species share a limiting resource in the same area. If the resource cannot support both populations, then lowered fecundity, growth, or survival may result in at least one species. Interspecific competition has the potential to alter populations, communities and the evolution of interacting species. On an individual organism level, competition can occur as interference or exploitative competition.

Exploitative competition is a form of competition in which one species either reduces or more efficiently uses a resource and therefore depletes the availability of the resource for the other species. Separating the effect of resource use from that of interference is not easy. A good example of exploitative competition is found in aphid species competing over the sap in plant phloem. Each aphid species that feeds on host plant sap uses some of the resource, leaving less for competing species. In one study, Fordinae geoica was observed to out-compete F. formicaria to the extent that the latter species exhibited a reduction in survival by 84%. Another example is driving of bisexual rock lizards of genus Darevskia from their natural habitats by a daughter unisexual form;[2] interference competition can be ruled out in this case, because parthenogenetic forms of the lizards never demonstrate aggressive behavior.

This type of competition can also be observed in forests where large trees dominate the canopy and thus allow little light to reach smaller competitors living below. These interactions have important implications for the population dynamics and distribution of both species.

Apparent competition occurs when two or more species in a habitat affect shared natural enemies in a higher trophic level. If two species share a common predator, for example, apparent competition can exist between the two prey items as they attempt to make themselves less available for consumption.[3]

Scramble competition occurs when a resource is inadequate for the needs of all. Each competitor obtains an equal amount, but never the amount it needs, leading to a depression in population growth.

Many studies, including those cited previously, have shown major impacts on both individuals and populations from interspecific competition. Documentation of these impacts has been found in species from every major branch of organism. The effects of interspecific competition can also reach communities and can even influence the evolution of species as they adapt to avoid competition. This evolution may result in the exclusion of a species in the habitat, niche separation, and local extinction. The changes of these species over time can also change communities as other species must adapt.

The competitive exclusion principle also called "The Gause principle"[4] which arose form mathematical analysis and simple competition models states that two species that use the same limiting resource in the same way in the same space and time cannot coexist and must diverge from each other over time in order for the two species to coexist. One species will often exhibit an advantage in resource use. This superior competitor will out-compete the other with more efficient use of the limiting resource. As a result, the inferior competitor will suffer a decline in population over time. It will be excluded from the area and replaced by the superior competitor.

A well documented example of competitive exclusion was observed to occur between Dolly Varden charr (Trout)(Salvelinus malma) and white spotted char (Trout)(S. leucomaenis) in Japan. Both of these species were morphologically similar but the former species was found primarily at higher elevations than the latter. Although there was a zone of overlap, each species excluded the other from its dominant region by becoming better adapted to its habitat over time. In some such cases, each species gets displaced into an exclusive segment of the original habitat. Because each species suffers from competition, natural selection favors the avoidance of competition in such a way.

Niche differentiation is a process by which competitive exclusion leads to differences in resource use. In the previous example, niche differentiation resulted in spatial displacement. In other cases it may result in other changes that also avoid competition. If competition avoidance is achievable, each species will occupy an edge of the niche and will become more specialized to that area thus minimizing competition. This phenomenon often results in the separation of species over time as they become more specialized to their edge of the niche, called niche differentiation. The species do not have to be in separate habitats however to avoid niche overlap. Some species adapt regionally to utilizing different resources than they ordinarily would in order to avoid competition.

There have been several well documented cases in birds where species that are very similar change their habitat use where they overlap. For example, they may consume different food resources or use different nesting habitat or materials. On the Galapagos Islands, finch species have been observed to change dietary specializations in just a few generations in order to utilize limited resources and minimize competition.

In some cases, third party species interfere to the detriment or benefit of the competing species. In a laboratory study, coexistence between two competing bacterial species was mediated by phage parasites.[5] This type of interaction actually helped to maintain diversity in bacterial communities and has far reaching implications in medical research as well as ecology. Similar effects have been documented for many communities as a result of the action of a keystone predator that preys on a competitively superior species.

Although local extinction of one or more competitors has been less documented than niche separation or competitive exclusion, it does occur. In an experiment involving zooplankton in artificial rock pools, local extinction rates were significantly higher in areas of interspecific competition.[6] In these cases, therefore, the negative effects are not only at the population level but also species richness of communities.

As mentioned previously, interspecific competition has great impact on community composition and structure. Niche separation of species, local extinction and competitive exclusion are only some of the possible effects. In addition to these, interspecific competition can be the source of a cascade of effects that build on each other. An example of such an effect is the introduction of an invasive species to the United States, Purple-loosestrife. This plant when introduced to wetland communities often outcompetes much of the native flora and decreases species richness, food and shelter to many other species at higher trophic levels. In this way, one species can influence the populations of many other species as well as through a myriad of other interactions. Because of the complicated web of interactions that make up every ecosystem and habitat, the results of interspecific competition are complex and site-specific.

The impacts of interspecific competition on populations have been formalized in a mathematical model called the Competitive Lotka–Volterra equations, which creates a theoretical prediction of interactions. It combines the effects of each species on the other. These effects are calculated separately for the first and second population respectively:

In these formulae, N is the population size, t is time, K is the carrying capacity, r is the intrinsic rate of increase and α is the competition coefficient. The results show the effect that the other species has on the species being calculated. The results can be graphed to show a trend and possible prediction for the future of the species. One problem with this model is that certain assumptions must be made for the calculation to work. These include the lack of migration and constancy of the carrying capacities and competition coefficients of both species. The complex nature of ecology determines that these assumptions are rarely true in the field but the model provides a basis for improved understanding of these important concepts.

There are other mathematical representations that model species competition, such as using non-polynomial functions.[7]