Interstate 81 (abbreviated I-81) is an Interstate Highway in the eastern part of the United States. Its southern terminus is at Interstate 40 in Dandridge, Tennessee; its northern terminus is on Wellesley Island (near Fishers Landing, New York) at the Canadian border, where the Thousand Islands Bridge connects it to Highway 401, the main Ontario freeway connecting Detroit via Toronto to Montreal. 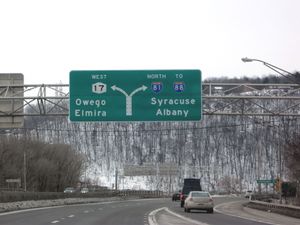 I-81 leaves NY 17 (future I-86) near Binghamton to head north toward Syracuse.

The Interstate 81 Corridor Coalition, a six-state coalition, was organized to handle issues along Interstate 81, such as truck traffic and air pollution. As of October 15, 2008, this commission has met twice.

Interstate 81 begins in Tennessee at Interstate 40 in Dandridge, a route that connects to Knoxville to the west and Asheville to the east. I-81 continues from where I-40 turns south to North Carolina. 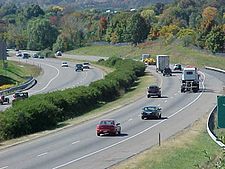 I-81 looking southbound near milepost 245 in Harrisonburg, Virginia.
Main article: Interstate 81 in Virginia

Interstate 81 in Virginia is largely a rural route with brief concurrencies with I-77 and I-64. The route parallels the Appalachian Mountains for much of its route through Tennessee and Virginia, serving such cities as the twin cities of Bristol, Tennessee and Bristol, Virginia, Roanoke, Christiansburg, Lexington, Staunton, Harrisonburg, and Winchester. In Harrisonburg, I-81 cuts through James Madison University. It parallels its older counterpart, U.S. Route 11, for its entire length in Virginia.

In July 2009, due to budgetary constraints, Virginia closed seven rest stops along I-81 in rural Virginia; however, in January 2010, the state announced that all rest areas would be reopened in the following months.[5]

Interstate 81 briefly enters the eastern panhandle of West Virginia for about 26 miles (41.84 km), serving the city of Martinsburg. The entire routing is in Berkeley County and serves the Eastern WV Regional Airport. The West Virginia segment was completed in 1966 and there have been no realignments since. West Virginia is currently widening Interstate 81 to six lanes from Martinsburg north to Exit 23 (US 11) connecting West Virginia and Maryland.

Interstate 81 passes through the state of Maryland at one of its narrowest points, passing through the "Hub City" of Hagerstown where it intersects with a large number of other routes. Being that this stretch is only 12.08 miles (19.44 km), this is the shortest stretch of I-81 among the states that it traverses. The Hagerstown Regional Airport is served by this interstate highway.

I-81 northbound at western terminus of I-78
Main article: Interstate 81 in Pennsylvania

Interstate 81 forms a major north–south corridor through the state of Pennsylvania, serving the boroughs of Chambersburg and Carlisle, where it meets the Pennsylvania Turnpike (I-76) but does not directly interchange with it (motorists must use US 11 to connect). Around the state capital of Harrisburg, the route forms the northeastern section of Pennsylvania's Capital Beltway. The route then travels northeast toward the Wyoming Valley, where it serves the cities of Wilkes-Barre and Scranton, then heads north through the Endless Mountains region toward the state line. 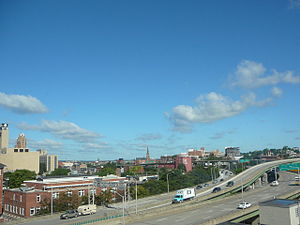 I-81 at I-690 in downtown Syracuse
Main article: Interstate 81 in New York

Interstate 81 enters the state of New York near Binghamton. It parallels U.S. Route 11 in a north–south direction, through much of the state, serving the cities of Syracuse (where it intersects the New York State Thruway), and Watertown. The route ends at the Canadian border at the Thousand Islands Bridge, where it crosses the St. Lawrence River, continuing as a short connector, Highway 137, which crosses the Thousand Islands Parkway before becoming Highway 401.

There are four current auxiliary routes either providing access to, or bypassing, various cities along the Interstate 81 route.