The Interstate Commerce Commission (ICC) was a regulatory agency in the United States created by the Interstate Commerce Act of 1887. The agency's original purpose was to regulate railroads (and later trucking) to ensure fair rates, to eliminate rate discrimination, and to regulate other aspects of common carriers, including interstate bus lines and telephone companies. Congress expanded ICC authority to regulate other modes of commerce beginning in 1906. The agency was abolished in 1995, and its remaining functions were transferred to the Surface Transportation Board.

The Commission's five members were appointed by the President with the consent of the United States Senate. This was the first independent agency (or so-called Fourth Branch).

The ICC was established by the Interstate Commerce Act of 1887, which was signed into law by President Grover Cleveland.[1] The creation of the commission was the result of widespread and longstanding anti-railroad agitation. Western farmers, specifically those of the Grange Movement, were the dominant force behind the unrest, but Westerners generally — especially those in rural areas — believed that the railroads possessed economic power that they systematically abused. A central issue was rate discrimination between similarly situated customers and communities.[2]:42ff Other potent issues included alleged attempts by railroads to obtain influence over city and state governments and the widespread practice of granting free transportation in the form of yearly passes to opinion leaders (elected officials, newspaper editors, ministers, and so on) so as to dampen any opposition to railroad practices.

Various sections of the Interstate Commerce Act banned "personal discrimination" and required shipping rates to be "just and reasonable."

The Commission had a troubled start because the law that created it failed to give it adequate enforcement powers.

"The Commission is, or can be made, of great use to the railroads. It satisfies the popular clamor for a government supervision of the railroads, while at the same time that supervision is almost entirely nominal." - William H. H. Miller, US Attorney General, circa 1889.[3]

Following passage of the 1887 act, the ICC proceeded to set maximum shipping rates for railroads. However, in the late 1890s several railroads challenged the agency's ratemaking authority in litigation, and the courts severely limited the ICC's powers.[4] [2]:90ff 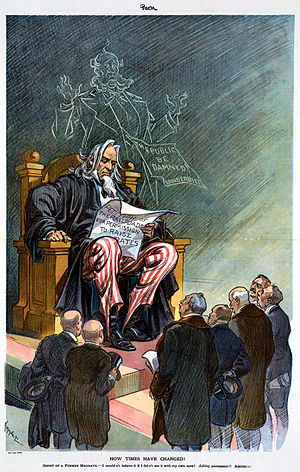 A 1914 cartoon shows railroad companies asking the ICC (depicted as Uncle Sam) for permission to raise rates, while the ghost of a horrified William Henry Vanderbilt looks on.

Congress expanded the commission's powers through subsequent legislation. The 1893 Railroad Safety Appliance Act gave the ICC jurisdiction over railroad safety, removing this authority from the states, and this was followed with amendments in 1903 and 1910.[5] The Hepburn Act of 1906 authorized the ICC to set maximum railroad rates, and extended the agency's authority to cover bridges, terminals, ferries, sleeping cars, express companies and oil pipelines.[6]

A long-standing controversy was how to interpret language in the Act that banned long haul-short haul fare discrimination. The Mann-Elkins Act of 1910 addressed this question by strengthening ICC authority over railroad rates, This amendment also expanded the ICC's jurisdiction to include regulation of telephone, telegraph and wireless companies.[7] In 1934, Congress transferred the telecommunications authority to the new Federal Communications Commission.[8]

The proposed 21 regional railroads were as follows:

There were 100 terminal railroads that were also proposed. Below is a sample:

Many small railroads failed during the Great Depression of the 1930s. Of those lines that survived, the stronger ones were not interested in supporting the weaker ones.[11] Congress repudiated Ripley's Plan with the Transportation Act of 1940, and the consolidation idea was scrapped.[12]

Although racial discrimination was never a major focus of its efforts, the ICC had to address civil rights issues when passengers filed complaints.

Relationship between regulatory body and the regulated

A friendly relationship between the regulators and the regulated is evident in several early civil rights cases. Throughout the South, railroads had established segregated facilities for sleeping cars, coaches and dining cars. At the same time, the plain language of the Act (forbidding "undue or unreasonable preference" as well as "personal discrimination") could be read as an implied invitation for activist regulators to chip away at racial discrimination.

In at least two landmark cases, however, the Commission sided with the railroads rather than with the African-American passengers who had filed complaints. In both Mitchell v. United States (1941) and Henderson v. United States, the Supreme Court took a more expansive view of the Act than the Commission.[13][20] In 1962, the ICC banned racial discrimination in buses and bus stations, but it did not do so until several months after a binding pro-integration Supreme Court decision Boynton v. Virginia and the Freedom Rides (in which activists engaged in civil disobedience to desegregate interstate buses). 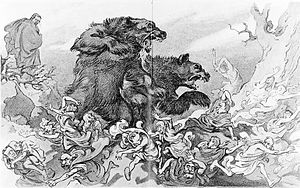 The limitation on railroad rates in 1906-07 depreciated the value of railroad securities, a factor in causing the panic of 1907.[21]

Some economists and historians, such as Milton Friedman assert that existing railroad interests took advantage of ICC regulations to strengthen their control of the industry and prevent competition, constituting regulatory capture.[22]

Economist David D. Friedman argues that the ICC always served the railroads as a cartelizing agent and used its authority over other forms of transportation to prevent them, where possible, from undercutting the railroads.[23]

Congress passed various deregulation measures in the 1970s and 1980s which diminished ICC authority, including the Railroad Revitalization and Regulatory Reform Act of 1976 ("4R Act"), the Motor Carrier Act of 1980 and the Staggers Rail Act of 1980. Senator Fred R. Harris of Oklahoma was a strong supporter of abolishing the Commission.[24] In 1995, when most of the ICC's powers had been eliminated, Congress finally abolished the agency with the Interstate Commerce Commission Termination Act.[25] Final Chair Gail McDonald oversaw transferring its remaining functions to a new agency, the Surface Transportation Board.

Prior to its abolition, the ICC issued identification numbers to Motor Carriers (bus lines, shipping companies, etc.) which it issued licenses. These identification numbers were generally in the form of ICC MC-000000. When the ICC was dissolved, the function of licensing interstate Motor Carriers was transferred to the Department of Transportation, so now all motor carriers which have federal licenses have a different "DOT number" such as DOT 000000.

The ICC served as a model for later regulatory efforts. Unlike, for example, state medical boards (historically administered by the doctors themselves), the seven Interstate Commerce Commissioners and their staffs were full-time regulators who could have no economic ties to the industries they regulated. Since 1887, some state and other federal agencies adopted this structure. And, like the ICC, later agencies tended to be organized as multi-headed independent commissions with staggered terms for the commissioners. At the federal level, agencies patterned after the ICC included the Federal Trade Commission (1914), the Federal Communications Commission (1934), the U.S. Securities and Exchange Commission (1934), the National Labor Relations Board (1935), the Civil Aeronautics Board (1940), Postal Regulatory Commission (1970) and the Consumer Product Safety Commission (1975). In recent decades, this regulatory structure of independent federal agencies has gone out of fashion. The agencies created after the 1970s generally have single heads appointed by the President and are divisions inside executive Cabinet Departments (e.g., the Occupational Safety and Health Administration (1970) or the Transportation Security Administration (2002)). The trend is the same at the state level, though it is probably less pronounced.