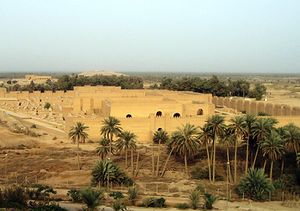 Reconstructed full-scale replica of the ancient city of Babylon in Iraq.

There are two prominent variants. One variant views an Iraqi nation as involving Arab and Kurdish people as having a common Mesopotamian heritage, this view was promoted by Abd al-Karim Qasim, who was of mixed Arab-Kurdish descent.[3] The second variant is a dual nationalism combining Iraqi nationalism alongside Arab nationalism, that supports Iraqi nationalism for matters involving Iraq and Arab nationalism for issues involving Arabs as a whole.[4] Saddam Hussein believed that the recognition of the ancient Mesopotamian origins and heritage of Iraqi Arabs was complementary to supporting Arab nationalism.[4] The Ba'athist regime officially included the historic Kurdish Iraqi Muslim leader Saladin as a patriotic symbol in Iraq, Saladin led Muslim and Arab forces during the Crusades.[5] 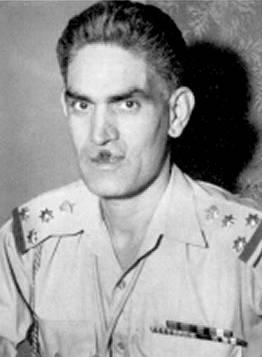 Abd al-Karim Qasim
File:Saddam Saladin Nebuchadnezzar.jpg
An Iraqi state-sponsored billboard that portrays Saddam Hussein seizing Jerusalem, showing both ancient Bablyonian chariots entering Jerusalem followed by Crusades-era Muslim horsemen, along with modern-day soldiers in the foreground with submachine guns who are celebrating. Saddam Hussein is shown holding the Iraqi flag beside Saladin (to the right of Saddam Hussein) and Nebuchadnezzar II (to the right of Saladin). Saddam Hussein supported the creation of a Palestinian Arab state as part of the Ba'athist agenda of eventual pan-Arab unification.

Iraqi nationalism has emphasized Iraq's cultural heritage to ancient Sumer, Babylonia and Assyria, states that are considered the cradle of civilization that spread civilization to other parts of the world.

During the Hashimite monarchy period in Iraq, it was commonplace for writers to write of an Iraqi identity separate from an Arab framework, Iraq's print media and education at the time emphasized Iraq's landscape, its tribes, and its unique poetry and literature.[6] Beginning in the 1930s, Iraqi historians began to address the Iraq revolt of 1920 by Iraqis against the British as a formative moment in Iraqi history that Iraqi historians referred to as "the Great Iraqi Revolution".[6]

Prominent early Iraqi nationalist figures were the intellectuals 'Abd al-Razzaq al-Hasani and 'Abbas 'Azzawi.[7] Al-Hasani was strongly critical of the British Mandate of Mesopotamia, published his first volume of his work The History of Iraqi Governments in the 1930s (the second published in the 1950s), the first volume was endorsed by King Faisal I of Iraq.[7] Al-Hasani was a prominent proponent of Iraqi nationalism.[7] In one of his works al-Hasani included a letter by Faisal I, the letter had Faisal I describing Iraq as suffering from religious and sectarian tensions due to Iraqis being unable to form a common nationalism.[8] Faisal I described Iraq as being governed by a literate Sunni elite over illiterate and ignorant Shi'ite and Kurdish sects who opposed the central government.[9] 'Azzawi wrote Iraq between Two Occupations - referring to Turkish and British rule, that received acclaim by the Iraqi government that assisted him in publishing his work.[8] The works of both al-Hasani and 'Azzawi were highly popular from 1935 to 1965, with many of their works being published in second and third editions and both authors' works influenced Iraqi nationalism.[10]

Abd al-Karim Qasim promoted a civic nationalism in Iraq that recognized Iraq's Arabs and Kurds as equal partners in the state of Iraq, Kurdish language was not only formally legally permitted in Iraq under the Qassim government, but the Kurdish version of the Arabic alphabet was adopted for use by the Iraqi state and the Kurdish language became the medium of instruction in all educational institutions, both in the Kurdish territories and in the rest of Iraq.[3] Under Qassim, Iraqi cultural identity based on Arabo-Kurdish fraternity was stressed over ethnic identity, Qassim's government sought to merge Kurdish nationalism into Iraqi nationalism and Iraqi culture, stating: "Iraq is not only an Arab state, but an Arabo-Kurdish state...[T]he recognition of Kurdish nationalism by Arabs proves clearly that we are associated in the country, that we are Irakians first, Arabs and Kurds later".[11] The Qassim government's pro-Kurdish policies including a statement promising "Kurdish national rights within Iraqi unity" and open attempts by Iraq to coopt Iranian Kurds to support unifying with Iraq resulted in Iran responding by declaring Iran's support for the unification of all Kurds who were residing in Iraq and Syria, into Iran.[12] Qassim's initial policies towards Kurds were very popular amongst Kurds across the Middle East whom in support of his policies called Qassim "the leader of the Arabs and the Kurds".[13]

Kurdish leader Mustafa Barzani during his alliance with Qassim and upon Qassim granting him the right to return to Iraq from exile imposed by the former monarchy, declared support of the Kurdish people for being citizens of Iraq, saying in 1958 "On behalf of all my Kurdish brothers who have long struggled, once again I congratulate you [Qassim] and the Iraqi people, Kurds and Arabs, for the glorious Revolution putting an end to imperialism and the reactionary and corrupt monarchist gang".[14] Barzani also commended Qassim for allowing Kurdish refugee diaspora to return to Iraq and declared his loyalty to Iraq, saying "Your Excellency, leader of the people: I take this opportunity to tender my sincere appreciation and that of my fellow Kurdish refugees in the Socialist countries for allowing us to return to our beloved homeland, and to join in the honor of defending the great cause of our people, the cause of defending the republic and its homeland."[14]

Saddam Hussein and Iraqi Ba'athist ideologists sought to fuse a connection between ancient Babylonian and Assyrian civilization in Iraq to the Arab nationalism by claiming that the Bablyonians and ancient Assyrians are the ancestors of the Arabs.[15] Thus, Saddam Hussein and his supporters claim that there is no conflict between Mesopotamian heritage and Arab nationalism.[15]

Saddam Hussein as President of Iraq expressed himself as an Iraqi in state art - associating himself as a modern-day Nebuchadnezzar II and wearing both Arabic and Kurdish headgear in such art.[1] Saddam Hussein also paralleled himself and the Ba'athist government to Saladin, the famous Iraqi Kurdish leader of Muslims and Arabs against Crusaders in Jerusalem, who was from Iraq.[5][16] 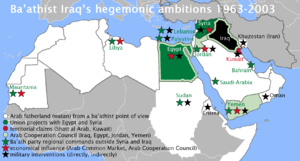 After gaining independence in 1932, the Iraqi government immediately declared that Kuwait was rightfully a territory of Iraq, claiming it had been part of an Iraqi territory until being created by the British.[17]

Saddam Hussein's government sought to annex several territories. In the Iran-Iraq War, Saddam claimed that Iraq had the right to hold sovereignty to the east bank of the Shatt al-Arab river held by Iran.[20] Iraq had officially agreed to a compromise to hold the border at the centre-line of the river in the 1975 Algiers Agreement in return for Iran to end its support for Kurdish rebels in Iraq.[21] The overthrow of the Iranian monarchy and the rise of Ruhollah Khomeini to power in 1979 deteriorated Iran-Iraq relations and following ethnic clashes within Khuzestan and border clashes between Iranian and Iraqi forces, Iraq regarded the Algiers Agreement as nullified and abrogated it and a few days later Iraqi forces launched a full-scale invasion of Iran that resulted in the Iran-Iraq War.[22] In addition, Saddam supported the Iraq-based Ahwaz Liberation Movement and their goal of breaking their claimed territory of Ahwaz away from Iran, in the belief that the movement would rouse Khuzestan's Arabs to support the Iraqi invasion.[23] In the Gulf War, Iraq occupied and annexed Kuwait before being expelled by an international military coalition that supported the restoration of Kuwait's sovereignty.

After annexing Kuwait, Iraqi forces amassed on the border with Saudi Arabia, with foreign intelligence services suspected that Saddam was preparing for an invasion of Saudi Arabia to capture or attack its oil fields that were a very short distance from the border.[24] It has been suspected that Saddam Hussein intended to invade and annex a portion of Saudi Arabia's Eastern Province on the justification that the Saudi region of Al-Hasa had been part of the Ottoman province of Basra that the British had helped Saudi Arabia conquer in 1913.[25] It is believed that Saddam intended to annex Kuwait and the Al-Hasa oil region, so that Iraq would be in control of the Persian Gulf region's vast oil production, that would make Iraq the dominant power in the Middle East.[26] The Saudi Arabian government was alarmed by Iraq's mobilization of ten heavily armed and well-supplied Iraqi army divisions along the border of Iraqi-annexed Kuwait and Saudi Arabia, and warned the United States government that they believed that Iraq was preparing for an immediate invasion of Saudi Arabia's Eastern Province.[27] The Saudi Arabian government stated that without assistance from outside forces, Iraq could invade and seize control of the entire Eastern Province within six hours.[27]