From Infogalactic: the planetary knowledge core
Jump to: navigation, search
For the other uses, see Irish Coffee (disambiguation).

Irish coffee (Irish: caife Gaelach) is a cocktail consisting of hot coffee, Irish whiskey, and sugar (some recipes specify that brown sugar should be used[1]), stirred, and topped with thick cream. The coffee is drunk through the cream. The original recipe explicitly uses cream that has not been whipped, although drinks made with whipped cream are often sold as "Irish coffee".

Although different variations of coffee cocktails pre-date the now-classic Irish coffee by at least 100 years, the original Irish coffee was invented and named by Joe Sheridan, a head chef in Foynes, County Limerick but originally from Castlederg, County Tyrone. The coffee was conceived after a group of American passengers disembarked from a Pan Am flying boat on a miserable winter evening in the 1940s. Sheridan added whiskey to the coffee to warm the passengers. After the passengers asked if they were being served Brazilian coffee, Sheridan told them it was "Irish coffee".[2][3]

Stanton Delaplane, a travel writer for the San Francisco Chronicle, brought Irish coffee to the United States after drinking it at Shannon Airport, when he worked with the Buena Vista Cafe in San Francisco to start serving it on November 10, 1952,[4] and worked with the bar owners Jack Koeppler and George Freeberg to recreate the Irish method for floating the cream on top of the coffee, sampling the drink one night until he nearly passed out.[5][6] The group also sought help from the city's then mayor, George Christopher, who owned a dairy and suggested that cream aged at least 48 hours would be more apt to float.[7] Delaplane popularized the drink by mentioning it frequently in his travel column, which was widely read throughout America. In later years, after the Buena Vista had served, by its count, more than 30 million of the drinks, Delaplane and the owners grew tired of the drink. A friend commented that the problem with Irish coffee is that it ruins three good drinks: coffee, cream, and whiskey.[8]

From the mid 19th Century, the Pharisäer and the Fiaker were served in Viennese coffee houses, both coffee cocktails served in glass, topped with whipped cream. The former was also known in northern Germany and Denmark around this time. Around the turn of the 20th century the coffee cocktail menu in the Viennese cafés also included Kaisermelange, Maria Theresia, Biedermeier-Kaffee and a handful of other variations on the theme.[citation needed]

In 19th-century France, a mixture of coffee and spirits was called a gloria. 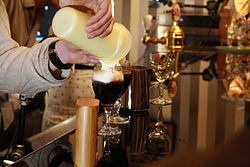 Black coffee is poured into the mug. Whiskey and at least one level teaspoon of sugar is stirred in until fully dissolved. The sugar is essential for floating liquid cream on top.[11] Thick cream is carefully poured over the back of a spoon initially held just above the surface of the coffee and gradually raised a little.[12] The layer of cream will float on the coffee without mixing. The coffee is drunk through the layer of cream.

Although whiskey, coffee and cream are the basic ingredients in all Irish coffee, variations in preparation exist. The choice of coffee and the methods used for brewing it differ significantly. The use of espresso machines or fully automatic coffee brewers is now typical: the coffee is either a caffè americano (espresso diluted with hot water) or some kind of filter coffee, often made using a coffee capsule.

The cream used by some bars to make what is sold as "Irish coffee" is sometimes sprayed from a can. Some bartenders gently shake fresh cream to achieve a smooth layer atop the coffee.[citation needed]

In Spain, Irish coffee (café irlandés) is sometimes served with a bottom layer of whiskey, a separate coffee layer, and a layer of cream on top;[14] special devices are sold for making it.

Some bars in Southeast Asia serve a cocktail of iced coffee and whiskey, sometimes without cream, under the name "Irish coffee."

Many drinks of hot coffee with a distilled spirit, and cream floated on top—liqueur coffees—are given names derived from Irish coffee, although the names are not standardised. Irish cream coffee (a.k.a., Bailey's coffee) can be considered a variant of Irish coffee but involves the use of Irish cream as a "pre-mixed" substitute for the whisky, cream and sugar. Jamaican coffee would be expected to be made with rum. Highland coffee, also called Gaelic coffee, with Scotch whisky, and so on.