From Infogalactic: the planetary knowledge core
Jump to: navigation, search
For the novel of the same name, see Irish Cream (novel). 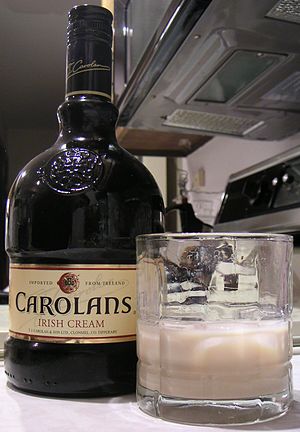 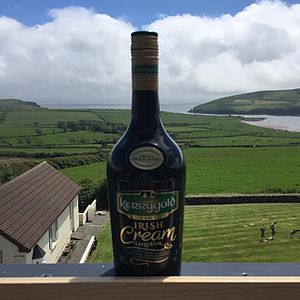 Irish cream is a cream liqueur based on Irish whiskey, cream, and other ingredients such as coffee, which can be served on its own, as an alcoholic substitute for milk/cream and sugar in a hot coffee (sometimes with whipped cream added on top), or used in mixed drinks or as part of a shot or a whole shot. Irish cream is very popular in the United Kingdom, Canada, and the United States.

Irish cream typically has 15 to 20% alcohol by volume (ABV). Some notable brands of Irish cream are Baileys, Kerrygold, Carolans, Brogans, and Saint Brendan's.

It is usually served on the rocks as a moderately strong beverage on its own, but is often mixed stronger by adding more whiskey or sometimes bourbon, which complements the Irish whiskey used in production. Coffee liqueur such as Kahlúa and many caramel liqueurs are also used. Baileys is a common addition to White Russians, due to its creamy flavour.

Some recipes for Irish cream liqueur have been published, which use various combinations of Irish whiskey, cream, coffee (sometimes, and usually optional), sweetened condensed milk, and evaporated milk. Many have significantly less alcohol by volume than the commercial brands.