Irish states have existed under a number of different names for nearly a thousand years. A unified Irish proto-state had been coalescing from the multitude of small tribal kingdoms that existed circa AD 500, similar to the pattern elsewhere in Europe. The independent development of the several dynastic regional kingdoms into a nascent national kingdom, however, was extinguished by the Norman invasion of Ireland in 1169, although these regional Gaelic Ireland kingdoms continued to resist for centuries until the Tudor conquest of Ireland was completed in the 17th century.

This list deals with the various states that existed from 1171 onwards that owed their origin to Norman and later, English involvement on the island of Ireland. These were recognised by the Holy See before 1570 and after 1766. Until the whole island was subdued following the end of the Nine Years' War in 1603 these states shared the island of Ireland with a patchwork of indigenous states that existed outside of their authority. 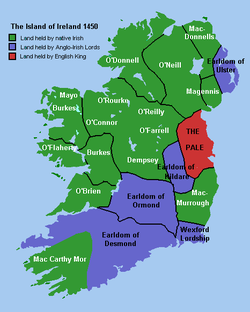 The list below refers to all-Ireland (or nominally all-Ireland) states and to the 1922 post-partition states, not the individual Gaelic kingdoms which exercised the actual governance in their area when they existed, including during the 1350–1500 "Gaelic resurgence".

For international purposes the British monarch was also King of Ireland until 1949, after which time the President of Ireland became the foreign sovereign. The Monarch's internal powers had already been removed by 1937. With the enactment of the Republic of Ireland Act in 1949, all powers of the British monarch were transferred to the president. The name of the state remained Ireland, even after the passing of the Republic of Ireland Act, see names of the Irish state.