Islam is although being the second-largest faith in Croatia after Christianity a religion followed by only 1.47% of the population according to the 2011 census, compared to 86.28% Roman Catholics, 4.57% not religious, atheists, agnostics and sceptics, 4.44% Orthodox Christians and 0.34% Protestants.[1]

Islam was introduced in Croatia by the Ottoman Empire during the Croatian–Ottoman Wars that lasted from 15th to 19th century. During this period some parts of the Croatian Kingdom were occupied which resulted in numerous Croats converting to Islam, some after being taken prisoners of war, some through the devşirme system. Nonetheless, Croats strongly fought against the Turks during these few centuries which resulted in the fact that the westernmost border of the Ottoman Empire and Europe became entrenched on the Croatian soil. In 1519, Croatia was called the Antemurale Christianitatis by Pope Leo X.

The Turkish Ottoman Empire conquered part of Croatia from the 15th to the 19th century. Numerous Croats converted to Islam, some after being taken prisoners of war, some through the devşirme system. The westernmost border of Ottoman Empire in Europe became entrenched on Croatian soil. In 1519, Croatia was called the Antemurale Christianitatis by Pope Leo X.

The historical names of many officials in the Ottoman Empire reveal their origin (Hirwat = Hrvat or Horvat, which is a Croatian name for Croat): Veli Mahmud Pasha (Mahmut Pasha Hirwat), Rüstem Pasha (Rustem Pasha Hrvat - Opuković), Piyale Pasha (Pijali Pasha Hrvat), Memipaša Hrvat, Tahvilpaša Kulenović Hrvat etc. There was some considerable confusion over the terms "Croat" and "Serb" in these times, and "Croat" in some of these cases could mean anyone from the wider South Slavic area.[7]

In 1553, Antun Vrančić, Roman cardinal, and Franjo Zay, a diplomat, visited Istanbul as envoys of the Croatian-Hungarian king to discuss a peace treaty with the Ottoman Empire. During the initial ceremonial greetings they had with Rüstem Pasha Hrvat (a Croat) the conversation led in Turkish with an official interpreter was suddenly interrupted. Rustem Pasha Hrvat asked in Croatian if Zay and Vrančić spoke Croatian language. The interpreter was then dismissed and they proceeded in the Croatian language during the entire process of negotiations.

In 1585, traveler and writer Marco A. Pigaffetta, in his Itinerario published in London, states: In Constantinople it is customary to speak Croatian, a language which is understood by almost all official Turks, especially military men. Crucially though, the lingua franca at the time among Slavic elites in the Ottoman Empire was still Old Church Slavonic. For Italians traveling through to Istanbul, the language of the Slavic Croats was often the only exposure they had to any of the Slavic languages; indeed, Bulgarian and Macedonian dialects were far more common in Istanbul than Croatian.[citation needed]

Since the nineteenth century 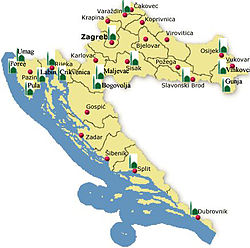 Location of Mosques in Croatia

Within the territory of the present Republic of Croatia, Muslim believers were registered for the first time during the 1931 census: 1,239 of them were in Zagreb and their overall number in Croatia being only about 4000.

During the Second World War the mufti of Zagreb was Ismet Muftić. After the war he was tried and eventually publicly hanged by the Partisans in 1945 because of his collaboration with the fascist regime of the Croatian WWII dictator Ante Pavelić.[8][9][10]

In the next censa in the People's Republic of Croatia, registered Muslim believers numbered as follows:

In the 1960s, the Bosnians Muslims community advocated for the recognition of the Bosniaks as a nationality in SFR Yugoslavia. The 1974 Yugoslav Constitution allowed for the official recognition of the Muslims as a nationality, therefore allowing more individuals to declare their alignment with a compromise categorization of Muslims by nationality (Muslimani), in this case separated from a religious basis (muslimani without capital letter). For example, Džemal Bijedić, a communist federal prime-minister was a declared "Muslim" and an atheist. The spike in the number of self-declared "Muslims" during socialist Yugoslavia times should thus be understood as persons having a family Muslim cultural background (similar to the concept of cultural Christians), rather than practicing believers in Islam. Based on the figures recorded during the 1931 to 1961 census, it may also be concluded that a certain number of Muslim believers declared themselves as Croats or Yugoslavs.

After the dissolution of Yugoslavia, an additional increase can be attributed to the influx of Bosnian Muslims that took place during and after the 1992-1996 Bosnian conflict.

The 2001 Croatian census identified a total of 56,777 adherents of Islam, or 1.3% of the total population of Croatia.[11] The following ethnic groups were presumed to be significantly Muslim: 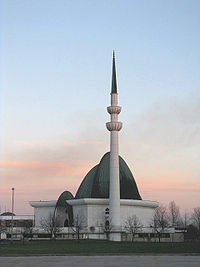 Zagreb Mosque was completed in 1987.

The published data from the 2011 Croatian census included a crosstab of ethnicity and religion which showed that a total of 62,977 Muslims (1.47% of the total population) was divided between the following ethnic groups:[14]

Croatia's capital Zagreb has one of the biggest mosques in Europe since 1987. During the existence of the Ottoman Empire it had none because Zagreb, as well as most parts of Croatia, wasn't occupied by the Ottomans during the Hundred Years' Croatian–Ottoman War.

The Bosniak imam Ševko Omerbašić, was the long-time leader of the Muslim community of Croatia and the Mufti of Zagreb.