From Infogalactic: the planetary knowledge core
Jump to: navigation, search
This article is about the town. For the publisher, see Editorial Ivrea.

Ivrea (Italian pronunciation: [iˈvrɛːa]; Latin: Eporedia) is a town and comune of the province of Turin in the Piedmont region of northwestern Italy. Situated on the road leading to the Aosta Valley (part of the medieval Via Francigena), it straddles the Dora Baltea and is regarded as the centre of the Canavese area. Ivrea lies in a basin that in prehistoric times formed a great lake. Today a number of five smaller lakes — Sirio, San Michele, Pistono, Nero and Campagna — are found in the area around the town.

Ivrea and its surroundings have been inhabited since the Neolithic era; the Celts are believed to have had a village in Ivrea from around the 5th century BC. However, the town first officially appears in history as an outpost of the Roman Empire founded in 100 BC, probably built to guard one of the traditional invasion routes into northern Italy over the Alps. Its Latin name was Eporedia.

After the fall of the Western Roman Empire, Ivrea became the seat of a duchy under the Lombards (6th-8th centuries). Under the Franks (9th century), Ivrea was a county capital. In the year 1001, after a period of disputes with bishop Warmund, ruler of the city, Arduin conquered the March of Ivrea. Later he became King of Italy and began a dynasty that lasted until the 11th century, when the city fell again under the bishops' sovereignty.

In the 12th century Ivrea became a free commune, but succumbed in the first decades of the following century to the rule of Emperor Frederick II. Later Ivrea was disputed between the bishops, the marquisate of Monferrato and the House of Savoy.

In 1356 Ivrea was acquired by Amadeus VI of Savoy. With the exception of the brief French conquest at the end of the 16th century, Ivrea remained under the House of Savoy until 1800. It was a subsidiary title of the king of Sardinia, although the only Marquis of Ivrea was Benedetto of Savoy (who later fought in the French Revolutionary wars). On May 26, 1800 Napoleon Bonaparte entered the city along with his victorious troops, establishing control that ended in 1814 after his fall.

During the 20th century its primary claim to fame was as the base of operations for Olivetti, a manufacturer of typewriters, mechanical calculators and, later, computers. The Olivetti company no longer has an independent existence, though its name still appears as a registered trademark on office equipment manufactured by others. In 1970 about 90,000 people (including commuters from Southern Italy) lived and worked in the Ivrea Area.[citation needed]

The Arduino electronic platform was created in Ivrea,[2] and takes its name from the historical figure of Arduin of Italy. 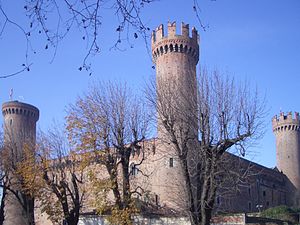 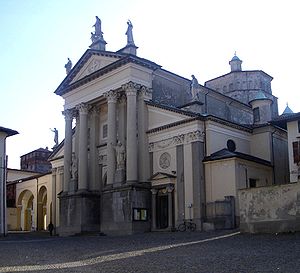 The Cathedral of Ivrea. 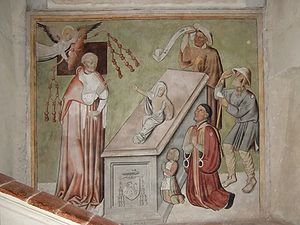 Unknown painter, second half of 15th century, A Miracle of the Blessed Pierre de Luxembourg (Cathedral).

There are two main festivals in Ivrea, both celebrated during Catholic festivity but both rooted in more ancient city's traditions. One is the Carnival, its main celebrations take place 40 days before Easter. The other is the patronal festival of St. Savino (Sabinus of Spoleto), celebrated the week of July 7. During the latter festivity, a horse fair takes place with a carriage exhibition and horse shows.

Battle of the Oranges

Main article: Battle of the Oranges 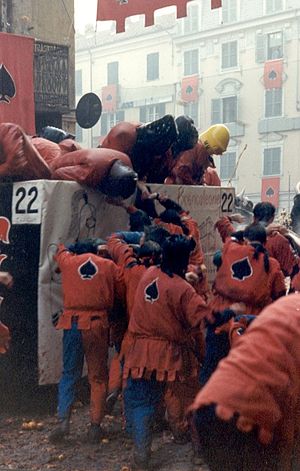 A scene from the "Battle of the Oranges".

Ivrea today is known for its peculiar traditional carnival. The core celebration centres around the Battle of the Oranges. This involves some thousands of townspeople, divided into nine combat on-the-ground teams, who throw oranges at tens of card-based teams  — with considerable violence — during the last three fat carnival days: Sunday, Monday and Tuesday. The carnival takes place 40 days before Easter and it ends on the night of "Fat Tuesday" with a solemn ceremony that involves a funeral in honour of the concluded Carnival. Traditionally, at the end of the silent march that closes the carnival the "General" says goodbye to everyone, pronouncing the traditional phrase "See you next Fat Thursday at 1 p.m."

A Mugnaia is chosen among the citizens spouses. The legend has that a miller's daughter (the eponymous "Mugnaia") once refused to accept the "right" of the local duke to spend a night with each newly wed woman and chopped his head off. Today the carriages represent the duke's guard and the orange throwers the revolutionaries. People wearing a red hat will not be considered part of the revolutionaries, and therefore will not have oranges thrown at them.

The origin of the tradition to throw oranges is not well understood, particularly as oranges do not grow in the foothills of the Italian Alps and must be imported from Sicily. In 1994 an estimate of 265,000 kilograms (584,000 lb) of oranges were brought to the city, mainly coming from the leftovers of the winter crop in southern Italy.

Ivrea is twinned with: