Jüterbog is a historic village in north-eastern Germany, in the Teltow-Fläming district of Brandenburg. It is on the Nuthe river at the northern slope of the Fläming hill range, about 65 km (40 mi) southwest of Berlin. 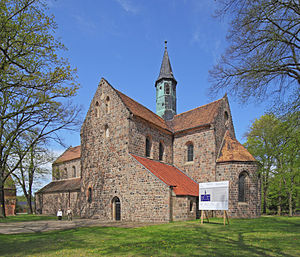 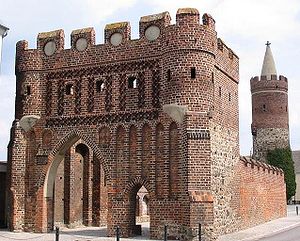 The Slavic settlement of Jutriboc in the Saxon Eastern March was first mentioned in 1007 by Thietmar of Merseburg, chronicler of Archbishop Tagino of Magdeburg. It nevertheless was not incorporated into the Magdeburg diocese until in 1157 Archbishop Wichmann von Seeburg in the train of Albert the Bear established a burgward here. In 1170 Wichmann also founded neighbouring Zinna Abbey and granted Jüterbog town privileges in 1174. The area remained a Magdeburg exclave between the Duchy of Saxe-Wittenberg and the Margraviate of Brandenburg throughout the Middle Ages.

It was in Jüterbog that a - failed - attempt was made to end the War of the Jülich succession by a treaty signed in March 1611 between the Saxon Electorate and Brandenburg. In November 1644 during the Thirty Years' War, Swedish troops defeated an Imperial army nearby. While the Magdeburg Archbishopric was promised to Brandenburg-Prussia by the 1648 Peace of Westphalia, the town of Jüterbog passed to Saxony.

The Battle of Dennewitz occurred two miles (3 km) southwest of Jüterbog on 6 September 1813 during the Napoleonic Wars. The Final Act of the 1815 Congress of Vienna finally adjudicated the town to the Kingdom of Prussia, it was subsequently administered within the Province of Brandenburg and became a garrison town of the Prussian Army. In 1871 it became part of the German Empire during the unification of Germany.

Under Nazi rule, Jüterbog's army base was greatly expanded and three surrounding villages were razed to make space for training areas. During the partition of Germany from 1945 to 1990, Jüterbog was part of East Germany and remained an important garrison town, now of the Red Army. Up to 40,000 Soviet soldiers were garrisoned in imposing Nazi-era barracks and in new buildings in the countryside. The huge garrison, about four times larger than the civilian population, strongly disrupted civilian life and the town was occasionally shelled as a result of indiscriminate Soviet artillery training. After the Red Army left reunified Germany in 1990, the 20,000 hectares (77 sq mi) military area was and remains closed to the public because of security and environmental hazards.[2]

The town is surrounded by a medieval wall including three gateways and barbicans. It encompasses two Protestant churches, of which Gothic St Nicholas' (14th century) is remarkable for its three fine aisles and features a preserved coffer of Johann Tetzel.

There are also a Roman Catholic church, the old town-hall with a statue of Saint Maurice from the 16th century and a modern school. Jüterbog carries on weaving and spinning both of flax and wool, and trades in the produce of those manufactures and in cattle. Vines are cultivated in the neighborhood.

Seats in the municipal assembly (Stadtverordnetenversammlung) as of 2008 elections:

In 1841 Jüterbog received access to the Berlin-Anhalt Railway line. Today the station is located at the junction of the railway line from Berlin to Wittenberg and a branch-off to Falkenberg/Elster, all served by Regional-Express trains of the Deutsche Bahn company. A third railway connection to Beelitz and Berlin-Wannsee is provided by the private Veolia Verkehr company.