From Infogalactic: the planetary knowledge core
Jump to: navigation, search
Not to be confused with Jeulmun pottery. 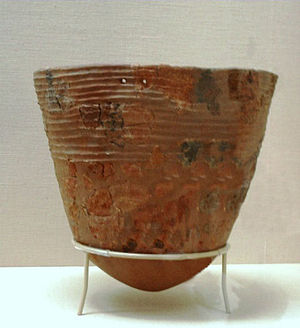 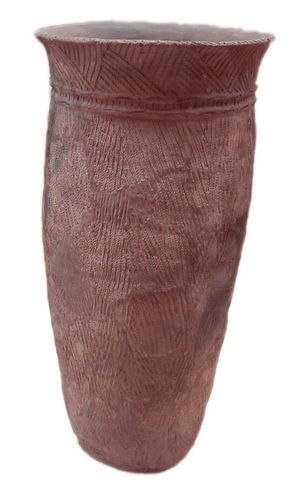 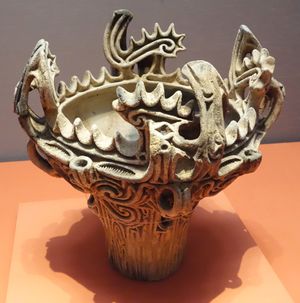 The Jōmon Pottery (縄文式土器, Jōmon-shiki Doki?) is a type of ancient pottery which was made during the Jōmon period in Japan. The term "Jōmon" (縄文) means "rope-patterned" in Japanese, describing the patterns that are pressed into the clay.

The pottery vessels crafted in Ancient Japan during the Jōmon period are generally accepted to be the oldest pottery in Japan.[citation needed]

Bits of pottery discovered in a cave in the northwest coast of modern-day Kyushu date back to as far as 12,700 BCE in radiometric dating tests.[1] It is believed by many that Jōmon pottery was probably made even earlier than this date. However, due to ambiguity and multiple sources claiming different dates based on different dating techniques, it is difficult to say for sure how far back Jōmon Pottery was made. Some sources claim archaeological discoveries as far back as the 14th millennium BCE.[2]

The majority of Jōmon pottery has rounded bottoms and the vessels are typically small. This shows that the vessels would typically be used to boil food, perhaps fitting into a fire.[4] Later Jōmon pottery pieces are more elaborate, especially during the Middle Jōmon period, where the rims of pots became much more complex and decorated.[1]

The name Jōmon itself means “rope-patterned”. This refers to the impressions on the surface of the pottery which were created by pressing rope into the clay before it was heated to approximately 600-900 degrees Celsius.[1]