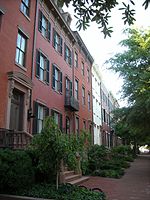 Jackson Place is a Washington, D.C. street located across from the White House and forming the western border of Lafayette Square between Pennsylvania Avenue and H Street, NW, beginning just south of Connecticut Avenue. 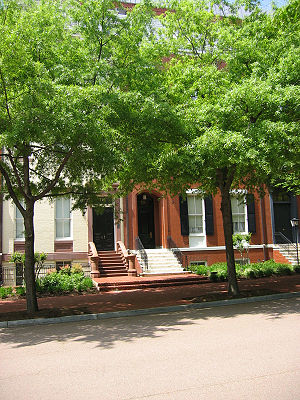 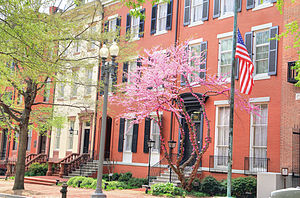 The block is situated on land once owned by the Decatur family, until 1869 when they sold it to Lorenzo Sherwood, who in turn sold the land to John Knower.[1] In 1957, the Federal government acquired the townhouses on Jackson Place. The government had plans to demolish the buildings to make way for construction of a new Federal office building on the land. In 1962, First Lady Jacqueline Kennedy intervened and the project was canceled.[2]

The block is lined by several townhouses constructed in the late 19th century.

712 Jackson Place was built in 1869 for Admiral James Blair, but was soon sold to Henry Rathbone. Rathbone is known for accompanying President Abraham Lincoln to Ford's Theatre on the night of the assassination. During World War I, the building was home to the Committee for Public Information, and for a brief time it housed the Women’s International League for Peace and Freedom.[2]

The building at 716 Jackson Place is owned by the U.S. Government and is reserved for the exclusive use by former Presidents when they are in town. Purchased in the late 1950s, it became the "Presidential Townhouse" in 1969 by President Richard Nixon.[3] The furnishings were very sparse until it was refurbished using private funds by President George W. Bush. The five story building includes two dining rooms, multiple bedrooms, and space for a Secret Service detail in the basement.[3] 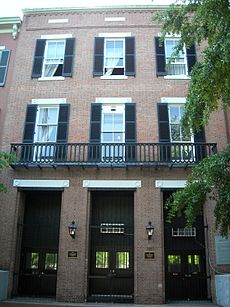 736 Jackson Place was originally built around 1870 for Cornelia Knower Marcy, the widow of Secretary of War William Learned Marcy. In the 1880s, Michigan Representative John Newberry and Senator James Blaine lived in the house. In 1887, Representative William Scott bought the house. The house was remodeled in 1895 by Carrere and Hastings.[1]

The townhouse served as temporary quarters for President Theodore Roosevelt and his staff, while the White House underwent renovations from June 25 to November 6, 1902. Roosevelt only stayed there briefly, before heading off to Oyster Bay, New York. On October 3, 1902, Roosevelt held a meeting in the house to deal with the anthracite coal strike occurring in Pennsylvania.[1]

The townhouse was bought in 1919 by the Women's City Club of Washington, which remained there until 1944. The house was then sold to the National Lutheran Council of the United Lutheran Church in America.[1]

Benjamin Henry Latrobe designed the Decatur House, located at 748 Jackson Place. Completed in 1818 for naval hero Stephen Decatur and his wife, Susan, its distinguished neo-classical architecture and prominent location across from the White House made Decatur House one of the capital's most desirable addresses and home of many of the nation's most prominent figures. Later residents included Henry Clay, Martin Van Buren, and Judah P. Benjamin. The Decatur House is now used as a museum.

The Ewell House, since demolished, was built on Jackson Place in 1819 for Dr. Thomas Ewell, who was a physician in the city, and author of a popular medical book, The History of the Medical Society.[citation needed] For health reasons Ewell left Jackson Place and returned to a farm in Prince William County, Virginia, and subsequently leased the house. Various government officials lived in the house, including Smith Thompson (Secretary of Navy in the Monroe administration), Samuel Southard, John Berrien (Attorney General), and Levi Woodbury (Secretary of Navy and Secretary of Treasury), Charles Richard Vaughan (Minister of Great Britain), John C. Spencer (Secretary of War), William C. Rives (father of novelist Amélie Rives Troubetzkoy), Vice President Schuyler Colfax, and General Daniel Edgar Sickles.[4][5]

The townhouse at the corner with Pennsylvania Avenue housed the Carnegie Endowment for International Peace for several decades, up until the late 1960s. Since then, the townhouse has been used as an annex to the Blair House.[6]