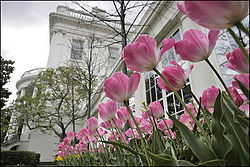 Spring in the Jacqueline Kennedy Garden. Pink tulips massed against the east colonnade of the White House. 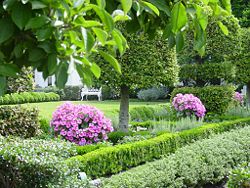 Summer in the Jacqueline Kennedy Garden. Magnolia and Littleleaf lindens underplanted with ageratum and boxwood. The white painted cast iron Rococo Revival garden bench has been on the White House grounds since 1850. 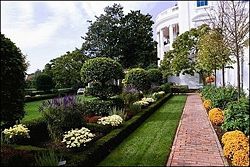 Fall in the Jacqueline Kennedy Garden. The brick paved walk along the east colonnade is bordered with bronze colored spoon chrysanthemumStarlet.
File:WHJBKGarden.jpg
Dedication plaque reading "This garden is dedicated to Jacqueline Kennedy with great affection by those who worked with her in the White House. April 22, 1965."

The Jacqueline Kennedy Garden is located at the White House south of the East Colonnade. The garden balances the Rose Garden on the west side of the White House Complex.

Edith Carrow Roosevelt, who had established her "Colonial Garden" on the site of the present Rose Garden, oversaw a similar but less formal planting on the east side, the site of the present Jacqueline Kennedy Garden. The garden known was begun in 1913 by First Lady Ellen Louise Axson Wilson. She called it the East Garden. Mrs. Wilson's design featured a central lily pond. Following her death in 1914, the garden was completed at a size of 36 meters by 19 meters (118 by 62 feet).

Rachel Lambert Mellon created a space with a more defined central lawn, bordered by flower beds planted in a French style, but largely using American botanical specimens. Though more formal than the previous East Garden, the Jacqueline Kennedy Garden pays tribute to Beatrix Farrand's work in its use of a more organic structure, planting masses of the same plants in drifts, and use of foliage plants like ornamental grasses and caladiums.

The present garden follows a layout established by Mellon. Each flower bed is planted with a series of Littleleaf lindens and Kennedy saucer magnolias bordered by low hedges of boxwood and American Holly. The outer edge of the flower bed facing the central lawn are edged with boxwood. Perennial flowering plants include delphinium, hollyhock, lavender, and roses. Many seasonal flowers are interspersed to add nearly year round color. Spring blooming bulbs planted in the rose garden include jonquil, daffodil, fritillaria, grape hyacinth, tulips, chionodoxa and squill. Summer blooming annuals change yearly. In the fall chrysanthemum and flowering kale bring color until early winter.

Official and informal use

Lua error in Module:Coordinates at line 668: callParserFunction: function "#coordinates" was not found.Kennedy family