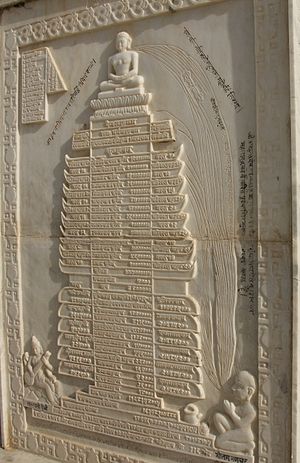 Jainism made its own unique contribution to this mainstream development of philosophy by occupying itself with the basic epistemological issues. According to Jains, knowledge is the essence of the soul.[1] This knowledge is masked by the karmic particles. As the soul obtains knowledge through various means, it does not generates anything new. It only shreds off the knowledge-obscuring karmic particles. According to Jainism, consciousness is a primary attribute of Jīva (soul) and this consciousness manifests itself as darsana (perception) and jnana (knowledge).

According to Jain text, Tattvartha sutra, knowledge (Jnana) is of five kinds:[2]-

The first two kinds of knowledge are regarded as indirect (knowledge) and remaining three as direct knowledge.[3]

The knowledge acquired through the empirical perception and mind is termed as Mati Jnana (Sensory knowledge). According to Jain epistemology, sense perception is the knowledge which the Jīva (soul) acquires of the environment through the intermediary of material sense organs.[4] This is divided into four processes:[5]

The knowledge acquired through understanding of verbal and written sentences etc, is termed as Śhrut Jnāna.

Scripture is not knowledge because scripture does not comprehend anything. Therefore, knowledge is one thing and scripture another; this has been proclaimed by the Omniscient Lord. 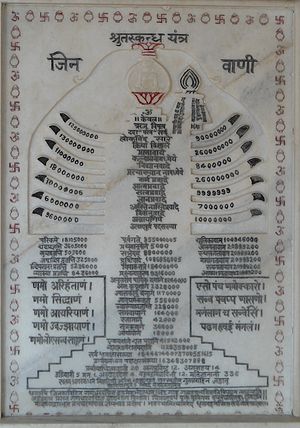 As per Jains, the knowledge of Śhrut Jnāna, may be of things which are contained in the Angas (Limbs or sacred Jain books) or of things outside the Angas.[7]

The scriptures mentions of a type of knowledge called 'Avadhi Jnana'. This knowledge is present in beings living in heaven and hell from birth.

According to Jainism, the soul can directly know the thoughts of others. Such knowledge comes under the category of 'Manhaparyaya Jnana'.

Anēkāntavāda refers to the principles of pluralism and multiplicity of viewpoints, the notion that truth and reality are perceived differently from diverse points of view, and that no single point of view is the complete truth.[8]

Jains contrast all attempts to proclaim absolute truth with adhgajanyāyah, which can be illustrated through the parable of the "blind men and an elephant". This principle is more formally stated by observing that objects are infinite in their qualities and modes of existence, so they cannot be completely grasped in all aspects and manifestations by finite human perception. According to the Jains, only the Kevalis—omniscient beings—can comprehend objects in all aspects and manifestations; others are only capable of partial knowledge. Consequently, no single, specific, human view can claim to represent absolute truth.