Jain festivals occur on designated days of the year. Jain festivals are either related to life events of Tirthankara or they are performed with intention of purification of soul.

There are many religious festivals in Jainism. Some of them are associated with five auspicious life events of Tirthankara known as Panch Kalyanaka.[1] 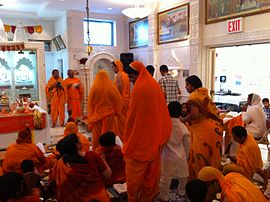 Paryushana Parva is one of the most important festival for Jains. Paryusana is formed by two words meaning ‘a year’ and ‘a coming back’. This festival comes in the months of Shravana and Bhadra (August or September). Svetambara Jains celebrate it for eight-days while Digambara Jains celebrate it for ten days. It is also known as Das Lakshana Parva. It is a festival of repentance and forgiveness. Many Jains fast and carry out different religious activities. Jain monks stop walking during chaturmas and reside at one place where they lecture on various religious subjects during paryushana. This festival is believed to remove accumulated karma of the previous year and develop control over new accumulating new karma, by following Jain austerities and other rituals. There are regular rituals at the Jain temples. Discourses of Kalpa Sutra are given by monks. Kalpa Sutradescribes life of Mahavira and other Tirthankaras. On the third day, procession of Kalpa Sutra is carried out. On the fifth day, auspicious dreams of Trishala, mother of Mahavira are demonstrated and after that birth of Mahavira is celebrated. The tenth day of festival is called Anant Chaurdsashi. Anant Chaturdashi is the day when Lord Vasupujya attained moksha(nirvan). Usually, a procession is taken out by Jains on this day. Kshamavani is generally observed a day after Anant Chaturdashi. On Kshamavani, Jains ask for forgiveness from everybody for any acts during the previous year which may had hurt them. 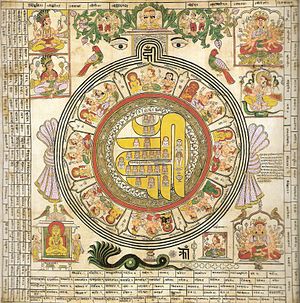 Mahavira was born on the thirteenth day of the bright half of the Jain calendar month of Chaitra, probably 599 BCE. It falls in March or April. This festival marks birth of Mahavira. Procession is carried out and lectures on message of Mahavira is presented. The idols of Mahavira is ceremonially bathed and rocked in a cradle. Events related to birth are also recited from sacred texts by monks.[1]

Diwali is one of the most important festival in India. Mahavir attained nirvana followed by moksha on this day in 527 BCE. It falls on the last day of Ashvina month of Jain calendar. It is also the last day of Indian calendar. It comes during October or November. It is believed that the eighteen kings of northern India, followers of Mahavira, decided to light lamps (known as dipa) symbolizing knowledge of Mahavira. So it is known as Deepavali or Diwali. Jains are forbidden to burst crackers.[2]On Diwali morning, Nirvan Ladoo is offered after praying to Lord Mahavira in all Jain temples all across the world. Gautam Gandhar Swami, the chief disciple of Lord Mahavira achieved omniscience (Kevala Gyan) later the same day.

After celebrating Divali at the end of Ashwina, Jains celebrate new year on the first day of the following month of Kartika. Ritual of Snatra Puja is performed at the temple. Mahavira's chief disciple Gautama Swami attained keval gyan on this day.[3]

The fifth day of Kartika is known as Gyana Panchami. It is considered knowledge day. On this day holy scriptures are displayed and worshipped.

It is celebrated on 10th day of dark half of Pausha (Pushya) month of Hindu calendar(December/January). It marks Janma Kalyanaka (Birth) of 23rd Tirthankara, Parshvanath. Three days fast known as Attham is observed by many Jains. 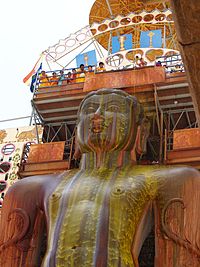 It is believed that the first Jain Tirthankara Rishabhdev completed of an austerity on 3rd day of the bright fortnight of Vaishakh month of Jain calendar after fasting for 13 months and 13 days continuously. People who performed austerity known as Varshi tapa regarding these event complete the austerity on this day by taking sugar-cane juice.[1]

Maun Agiyaras or Ekadashi marks Kalyanaka of many Tirthankaras. It is celebrated on 11th day of Magshar month of Jain calendar(October/November). On this day, complete silence is observed and fasting is kept. Meditation is also performed.

The nine-day Oli is a period of semi-fasting. During these period Jains take only one meal a day of very plain food. It comes twice a year during March/April and September/October.

Mahamastakabhisheka is a festival held once every twelve years in the town of Shravanabelagola, Karnataka. It is held in veneration of an immense 18 meter high statue of Bahubali. The last anointing took place in February 2006, and the next ceremony will occur in 2018.[4]

Roth Teej is celebrated on Bhadrapada Shukla Tritiya. On Roth Teej, the Jains are suppose to eat only one type of grain food, Roth, once during the day. The festival is a reminder that material wealth is not important, only relinquishment leads to true happiness. 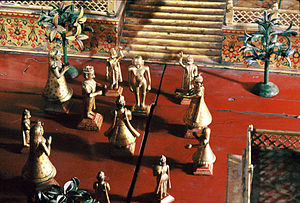 Shrut Panchami is celebrated by Jains every year in the month of May commemorating Acharya Pushpadanta and Bhutabali.[5]