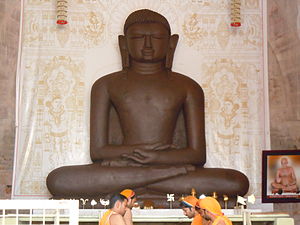 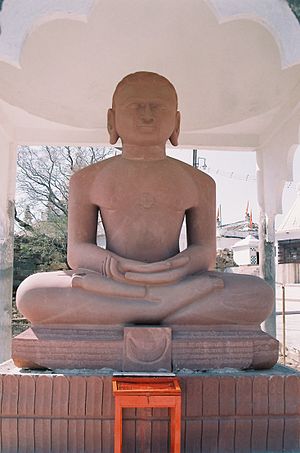 Image depicting Chandraprabha, the eight tirthankara of present half cycle of time

The Jain idols are always male, depicted in both sitting and standing postures.[3] The tīrthaṅkaras are represented either seated in yoga posture or standing in the Kayotsarga posture.[4] Parshvanatha statues are usually depicted with a snake crown on head, Bahubali statues are usually depicted covered with creepers.[5] However, there are a few differences in Digambara and Svetambara depiction of idols.[3] Digambara images are naked without any beautification whereas Svetambara ones are clothed and decorated with temporary ornaments.[3]

Charans are footprints exclusive to Jain temples. The charan of Tirthankara Rishabhanatha are present at the Badrinath Temple. 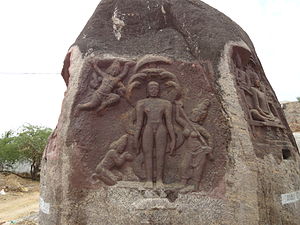 Jainism spread here and there all over Tamil Nadu during Sangam Age. One of the Tamil literature, called Paripadal (பரிபாடல்), probably belongs to 3rd century, mentions that there were propelling statues sculptured in stone for different deities in the temple of God Murugan in Thirupparankundram. One among them was Jain statue. Others are Kaaman-Rathi (the deities of Love), Deity Indira (the king of so-called Heavenly people according to Indian mythology), Agaligai (wife of Saint Gaudham), and Buddha.

Jain sculptures in Kalugumalai near Madurai belongs to one century latter is to be compared with Thirpparankunram Jain sculpture. In addition a propelling stone statue of a Jain monk mentioned in Tamil literature is also present. Cave inscriptions in Brahmi script of Chera kings in Pugalur probably one century earlier to that of the literature we have taken to our consideration, names some of the Jain Monks vs Yatrur Senkayapan, Pittan, Kotran. Pittan and Kotran are the chieftains of Tamil Nadu also mentioned in Tamil literature more or less to the same period.

Many Jain sculptures are kept in Government Museum, Chennai. [8] [9]

The oldest Jain sculpture in the Metropolitan Museum of Art in New York is of the Siddha Bahubali.[10]