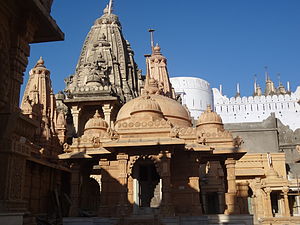 A Jain temple is the place of worship for Jains, the followers of Jainism,[1] Derasar is a word used for a Jain temple in Gujarat and Rajasthan. Basadi is a Jain shrine or temple.[2] The word is generally used in South India, including Maharashtra. Its historical use in North is preserved in the names of the Vimala Vasahi and Luna Vasahi temples of Mount Abu. The Sanskrit word is vasati, it implies an institution including residences of scholars attached to the shrine.[3] 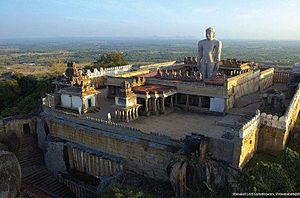 All shikar-bandhi Jain temples have many marble pillars which are carved beautifully with Demi god posture. There is always a main deity also known as mulnayak in each derasar. The main part of Jain temple is called "Gambhara" (Garbha Graha) in which there is the stone carved God idol. One is not supposed to enter the Gambhara without taking a bath and without wearing puja (worship) clothes.

A Jain temple which is 100 years old is called a Tirtha.

The main deity of a Jain temple is known as a mula nayak.[5]

A Manastambha (column of honor) is a pillar that is often constructed in front of Jain temples.

There are some guidelines to follow when one is visiting a Jain temple:[6]

Prevailing traditional customs should be followed regarding worshipping at the temple and touching an idol. They can very depending on the region and the specific sect.