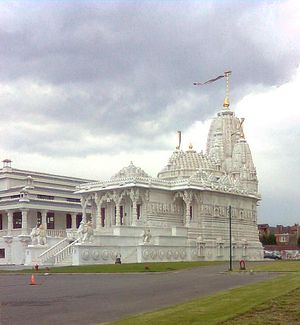 The Jain community in Europe, especially in Belgium, is mostly involved in the very lucrative diamond business.[1]

The Jains in Belgium are estimated to be around about 1500 people. The majority live in Antwerp, working in the wholesale diamond business. Belgian Indian Jains control two-thirds of the rough diamonds trade and supplied India with roughly 36% of their rough diamonds.[2] They are building a major temple in Wilrijk (near Antwerp), with a cultural centre.[3] Their spiritual leader, Ramesh Mehta, is a full-fledged member of the Belgian Council of Religious Leaders put up on 17 December 2009.[4]

In 1992, The Jain Cultural Centre of Antwerpen VZW was formed with 12 committee members and 52 founder members. Land for a Jain temple and a meditation centre (Upashray) was purchased. In 2001, construction of Antwerp Jain temple and meditation hall began. In 2007, Jain idol's Anjanshalaka took place on 31 January in India and was performed by Jain ascetics Acharya Shri Subodhsagarsuriswarji, Acharya Shri Manohar Kiritisagarsuriswarji, Acharya Udaykirtisagarsuriswarji and Shri Narendra Hiralal. In 2008, on 25 August the idols were brought to Antwerp by air, this was followed by a huge procession. In 2010, on 27 August, the Idol's pratistha was performed.
Principal deity of this temple is Parshvanatha, 23rd tirthankara of Jainism.