Bundelkhand, in the heart of India, has been an ancient centre of Jainism. It is mostly in modern Madhya Pradesh, but part of it is in Uttar Pradesh.

Bundelkhand was known as Dasharna or Jaijakabhukti in ancient times. The Betwa (Vetravati) and Dhasan (Dasharna) rivers flow through it.

It is one of the few regions in India where Jainism has a strong presence and influence. There are many ancient tirthas in Bundelkhand. Many of the modern scholars of Jainism are from this region. 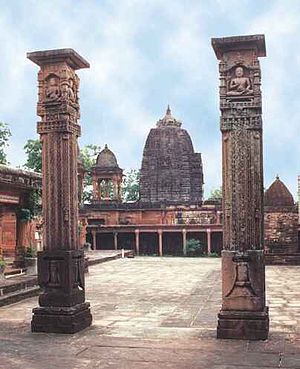 The Shantinath Temple at Deogarh. The columns show Jain monks.

The Khandelwals are originally from Rajasthan, but they have been present in Bundelkhand since ancient times.

Navalsah Chanderia in 1768 in his Vardhamana Purana mentioned 11 communities that were partly Jain. These include

A few among them are still jain and follow the Taranpanthi sect.

The Bhadavar region (Bhind, Muraina, Etawah) is adjacent to Bundelkhand and is home to