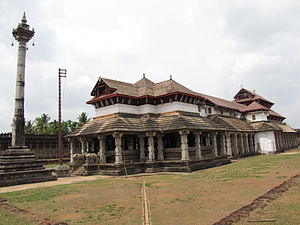 Karnataka, a state in South India has a long association with Jainism, a religion which enjoyed patronage of major historic kingdoms in the state such as the Western Ganga, Kadamba and Chalukya dynasties and the Hoysala Empire. Today the state is home to a number of Jain monuments, such as temples, Gommaṭa statues and stambhas.

Historical association of Jainism with Karnataka dates back to the 3rd century BC.[1][2] Acharya Bhadrabahu, predicted a twelve year long famine in north India and led the migration of Jain sangha to the south.[1] He was accomponied by his disciple Chandragupta Maurya and the Sangha halted at Chandragiri Hill. Realising that he was nearing the end of his life, Bhadrabahu instructed his disciples to spread the religion and he undertook sallekhana at Chandragiri.[3]

Chandragupta Maurya continued to live on this hill worshipping the foot prints of his teacher and later he too took Sallekhana. There are two monuments on the hill recalling this event, a rock cut cave called Bhadrabahu cave and a structural shrine called the Chandragupta Basadi.[4]

There are a number of monuments relating to the Jain religion in Karnataka. The Jain monuments include smaller shrines, Jain temples (known as Bastis or Basadis), Gommata statues and Sthambas (pillars). Moodabidri,(ಸಾವಿರ ಕಂಬದ ಬಸಧಿ) is home to the 1000 Pillar Jain temple.

The most prominent among them are as follows: 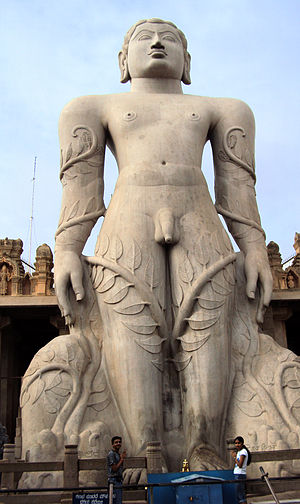 The statue of Bahubali at Shravanabelagola dates from 978-993 AD.

There are five monolithic statues of Bahubali in Karnataka measuring more than 20 feet in height.

In all of the above-mentioned places, the holy festival of Mahamastakabhisheka is held once every 12 years when the statue of Bahubali is worshiped and bathed in holy water, milk, turmeric, and other natural herbs that have their own significant importance.

Jainism in North Karnataka flourished under the Chalukyas, Kadamba and Rashtrakutas, and Vijayanagara empire.[5] Imbued with an intense religious feeling, lavish patronage was extended towards the building of basadis, temples and magnificent statues. Jainism enjoyed the highest repute among the people particularly the ruling classes and the mercantile community thus virtually becoming the state religion.

The earliest dated structure is a Basadi at Halasi built under the Kadamba Dynasty of Banavasi thus laying the foundation for Jain architecture in North Karnataka. Besides the Kadambas, the Chalukyas and the Rashtrakutas made liberal endowments towards the propagation of art and architecture to which the Jain contributions have been of classical significance.

The Chalukyas of Badami built cave temples at Badami and Aihole. Puligere was a strong centre of religious activities of the Jain monks during this era.

The Dakshin Bharat Jain Sabha is a religious and social service organization of the Jains of South India. The organization is headquartered at Kolhapur, Maharashtra, India.[6] The association is credited with being one of the first Jain associations to start reform movements among the Jains in modern India.[7][8] The organization mainly seeks to represent the interests of the native Jains of Maharashtra (Marathi Jains), Karnataka (Kannada Jains) and Goa.