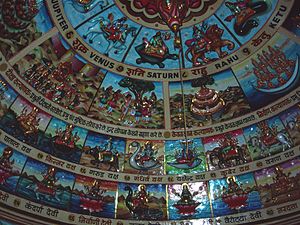 Inner dome of the Jain temple at Walkeshwar, Mumbai

Mumbai has one of the largest populations of Jains among all the cities in India. Mumbai also has numerous Jain temples. One of the best known is the Babu Amichand Panalal Adishwarji Jain Temple, Walkeshwar (Malabar Hill).

Jains are among of the most prosperous communities in Mumbai, with a number of big businesses owned and industries dominated by them

The Godiji Parshwanath Temple in Pydhonie is one of the oldest Jain temple in Mumbai, constructed in 1812. The white idol of the chief god Godi Parshwanatha was brought from an ancient temple at Hamirpur in Rajasthan.

The Dakshin Bharat Jain Sabha is a religious and social service organization of the Jains of South India. The organization is headquartered at Kolhapur, Maharashtra, India.[1] The association is credited with being one of the first Jain associations to start reform movements among the Jains in modern India.[2][3] The organization mainly seeks to represent the interests of the native Jains of Maharashtra (Marathi Jains), Karnataka (Kannada Jains) and Goa.