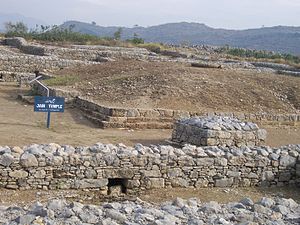 A Jain Temple at Sirkap, part of the Indo-Greek kingdom, near modern day Taxila, Punjab, Pakistan

Jainism in Pakistan has an extensive heritage and history, although Jains form a very small community in the Islamic Republic today. Historic evidence indicates the presence of Jainism in the Indus Valley Civilization which existed in Pakistan and northwestern India.

Baba Dharam Dass was a holy man whose tomb is located near the bank of a creek called (Deoka or Deokay or Degh) near Chawinda Phatic, behind the agricultural main office in Pasrur, near the city of Sialkot in Punjab, Pakistan.

Bhabra (or Bhabhra) is an ancient merchant community from Punjab which mainly follows Jainism.[1][2]

The original home region of the Bhabras is now in Pakistan. While practically all the Bhabras have left Pakistan, many cities still have sections named after Bhabras.

Some also lived in Sindh.[7] 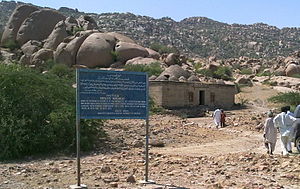 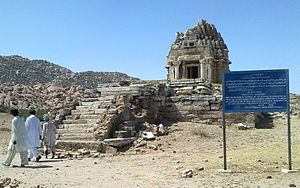 Prior to 1947, there were small communities of Jains in the Punjab and Sindh regions. Most of them migrated to India after the partition of India.[15]