James Morris Lawson, Jr. (born September 22, 1928) is an American activist and university professor. He was a leading theoretician and tactician of nonviolence within the American Civil Rights Movement.[1] During the 1960s, he served as a mentor to the Nashville Student Movement and the Student Nonviolent Coordinating Committee.[2][3] He continues to train activists in nonviolence.

Lawson was born on September 22, 1928 in Uniontown, Pennsylvania.[4] He grew up in Massillon, Ohio.

While a freshman at Baldwin Wallace College in Berea, Ohio, he joined the Fellowship of Reconciliation (FOR), an organization led by A.J. Muste, and the Congress of Racial Equality (CORE), an organization affiliated with FOR. Both FOR and CORE advocated nonviolent resistance to racism; CORE conducted sit-ins in some northern cities in the late 1940s and embarked on a freedom ride more than a decade before the more famous ones of the early 1960s. Consistent with those principles of nonviolence, he declared himself a conscientious objector and refused to report for the draft in 1951. He served fourteen months in prison after refusing to take either a student or ministerial deferment.[5]

After his release from prison, he went as a Methodist missionary to Nagpur, India, where he studied satyagraha, the principles of nonviolence resistance that Mohandas Gandhi and his followers had developed.[5] He returned to the United States in 1955, entering the Graduate School of Theology at Oberlin College in Ohio. One of his Oberlin professors introduced him to Martin Luther King, Jr., who had led the Montgomery Bus Boycott in Montgomery, Alabama and had also embraced Gandhi's principles of nonviolent resistance. King urged Lawson to come South, telling him, "Come now. We don't have anyone like you down there."

Leadership during the Civil Rights Movement

Lawson moved to Nashville, Tennessee and enrolled at the Divinity School of Vanderbilt University, where he served as the southern director for CORE and began conducting nonviolence training workshops for the Southern Christian Leadership Conference. While in Nashville, he met and mentored a number of young students at Vanderbilt, Fisk University, and other area schools in the tactics of nonviolent direct action.[6] In Nashville, he trained many of the future leaders of the 1960s Civil Rights Movement, among them Diane Nash, James Bevel, Bernard Lafayette, Marion Barry, and John Lewis. In 1959 and 1960, they and other Lawson-trained activists launched the Nashville sit-ins to challenge segregation in downtown stores. Due to his role in these activities, Lawson was expelled from Vanderbilt, an event that would later become a source of deep embarrassment to the university.[7] During the 2006 graduation ceremony, Vanderbilt apologized for its treatment of Lawson; he is now a member of its faculty.[7]

Lawson's students played a leading role in the Open Theater Movement, the Freedom Rides, the 1963 March on Washington, Mississippi Freedom Summer, the Mississippi Freedom Democratic Party, the 1963 Birmingham Children's Crusade, the 1965 Selma Voting Rights Movement, the 1966 Chicago Open Housing Movement, and the Anti-Vietnam War Movement over the next few years. In 1962, Lawson brought Dr. King and Rev. James Bevel together for a meeting which resulted in the two agreeing to work together as equals.[8] Bevel was then named SCLC's Director of Direct Action and Director of Nonviolent Education.

Lawson became pastor of Centenary Methodist Church in Memphis, Tennessee in 1962. In 1968, when black sanitation workers went on strike for higher wages and union recognition after two of their co-workers were accidentally crushed to death, Reverend Lawson served as chairman of their strike committee. (See Memphis Sanitation Strike) He invited Dr. King to Memphis in April 1968 to dramatize their struggle, which had adopted the slogan I am a Man. Dr. King delivered his famous "Mountaintop" speech in support of the strike in Memphis on April 3, 1968, the day before his assassination. 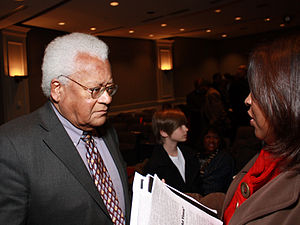 Lawson moved to Los Angeles in 1974 to lead Holman United Methodist Church[4] where he served for twenty-five years before retiring in 1999. He has continued to train activists in nonviolence and to work in support of a number of causes, including immigrants' rights in the United States and the rights of Palestinians, opposition to the war in Iraq, and workers' rights to a living wage. In 2004, he received the Community of Christ International Peace Award.

He spearheaded California State University Northridge's (CSUN) Civil Discourse and Social Change initiative as a Visiting Faculty for the academic year of 2010/11.[9] The initiative built on CSUN's history of activism and diversity, while focusing on the current budget and policy battles surrounding education. Lawson helped bring perspective, knowledge, and strategic thinking to the campus.

The International Center on Nonviolent Conflict held an eight day program on civil resistance facilitated by Lawson in Nashville, in 2013 and 2014.[10]

Lawson was portrayed in the 2013 motion picture The Butler by actor Jesse Williams. The film chronicles Lawson's training sessions during the civil rights protests of the 1950s and 1960s.