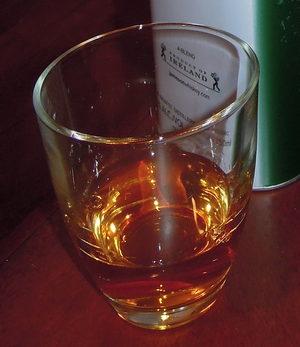 Jameson is a blended Irish whiskey produced by the Irish Distillers subsidiary of Pernod Ricard.

The John Jameson and Son Irish Whiskey company was formally established in 1810 when John Jameson and his son (also John Jameson) took ownership of the Bow Street Distillery in Dublin which had originally been built by his wife's cousins the Steins in 1780. Jameson was a Scottish lawyer from Alloa in Clackmannanshire who had married Margaret Haig, a sister of the Haig brothers who owned the Haig distilleries. Margaret Haig was a first cousin of the Steins, a Scottish distilling family, also from Clackmannanshire, with significant distilling interests in Scotland and Dublin. On his marriage to Margaret Haig in 1786, John Jameson moved with his new wife to Dublin to manage the Stein's Bow Street Distillery (which had been established in 1780) for Margaret's Stein uncle. This explains the use of the year 1780 in Jameson marketing as the Bow Street Distillery was where Jameson Irish Whiskey was born.[1] Portraits of John and Margaret Jameson by Sir Henry Raeburn are in the collection of the National Gallery of Ireland.

Originally one of the six main Dublin Whiskeys, Jameson is now distilled in Cork. In 2013, annual sales topped 4.7 million cases (56.4 million bottles). Jameson is by far the best selling Irish whiskey in the world, as it has been sold internationally since the early 19th century. The United States is the largest market for Jameson Whiskey, with consumption during 2013 up by 12%.[2]

When John Jameson, a Scottish businessman,[3] became manager of the Stein family Bow Street Distillery in 1786, it was producing about 30,000 gallons annually. By the turn of the 19th century, it was the second largest producer in Ireland and one of the largest in the world, producing 1,000,000 gallons annually. Dublin at the time was the centre of world whiskey production. It was the second most popular spirit in the world after rum and internationally Jameson had by 1805 become the world's number one whiskey. Today, Jameson is the world's third largest single-distillery whiskey.

Historical events, for a time, set the company back. The temperance movement in Ireland had an enormous impact domestically but the two key events that affected Jameson were the Irish War of Independence and subsequent trade war with the British which denied Jameson the export markets of the Commonwealth, and shortly thereafter, the introduction of prohibition in the United States. While Scottish brands could easily slip across the Canadian border, Jameson was excluded from its biggest market for many years.[4] 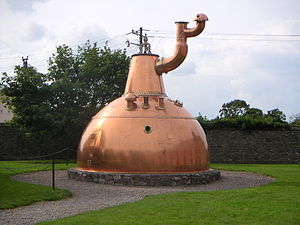 Historical pot still at the Jameson distillery in Cork

The introduction of column stills by the Scottish blenders in the mid-19th-century enabled increased production that the Irish, still making labour-intensive single pot still whiskey, could not compete with. There was a legal enquiry somewhere in 1908 to deal with the trade definition of whiskey. The Scottish producers won within some jurisdictions, and blends became recognised in the law of that jurisdiction as whiskey. The Irish in general, and Jameson in particular, continued with the traditional pot still production process for many years.

In 2008, The Local, an Irish pub in Minneapolis, sold 671 cases of Jameson (22 bottles a day).[7] making it the largest server of Jameson's in the world – a title it maintained for four consecutive years.[8] 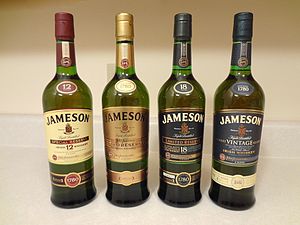 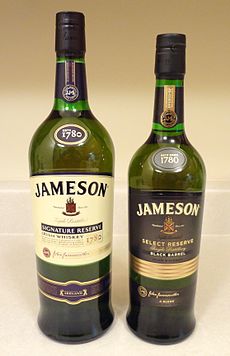 As well as Jameson Original, the Jameson Reserves include:

Jameson Irish whiskey is produced from a mixture of malted and unmalted or "green" Irish barley, all sourced from within a fifty-mile radius around the distillery in Cork. The barley is dried in a closed kiln fired by natural gas (formerly anthracite coal). This is in contrast to the traditional method used in Scotch whisky production, which fires the kiln with peat, adding a distinctive peat flavour.[11]