From Infogalactic: the planetary knowledge core
Jump to: navigation, search
"Firdaus" redirects here. For the city in Iran, see Ferdows.

Jannah (Arabic: جنّة‎‎ Jannah), an eternal place for Muslims, is the Islamic conception of paradise. The Arabic word Jannah is a shortened version meaning simply "Garden". According to Islamic eschatology, after death, one will reside in the grave until the appointed resurrection on Yawm al-Qiyāmah. Muslims believe that the treatment of the individual in the life of the grave will be according to his or her deeds in the worldly life. Jannah is often compared to Christian concepts of Heaven. According to Muslim belief, everything one longs for in this world will be there in Paradise.[1]

The highest level of Paradise is Firdaws (Arabic: فردوس), which is where the prophets, the martyrs, and the most truthful and pious people will dwell. In contrast to Jannah, the words Jahannam and Nār are used to refer to the concept of hell. There are many words in the Arabic language for both Heaven and Hell and those words also appear in the Qur'an and Hadith. Most of them have become part of the Islamic traditions.

The descriptions of paradise are mentioned in significant detail in the Qur'an, Hadiths and traditional tafsīr (exegesis). Paradise is described as surrounded by eight principal gates, each level generally being divided into a hundred degrees. The highest level is known as firdaws (sometimes called Eden). It will be entered first by Muhammad, then those who lived in poverty, and then the most pious. Entrants will be greeted by angels with salutations of peace or As-Salamu Alaykum.[2]

Gardens of perpetual bliss: they shall enter there, as well as the righteous among their fathers, their spouses, and their offspring: and angels shall enter unto them from every gate (with the salutation):
"Peace unto you for that ye persevered in patience! Now how excellent is the final home!"

The Islamic texts describes life for its immortal inhabitants as: one that is happy—without hurt, sorrow, fear or shame—where every wish is fulfilled. Traditions relate that inhabitants will be of the same age, and of the same standing. Their life is one of bliss including wearing sumptuous robes, bracelets and perfumes as they partake in exquisite banquets served in priceless vessels by immortal youths (Ghilman), as they recline on couches inlaid with gold or precious stones. They will eat delicious food and drink, and every bowl will have a new taste. They will take eructation which will digest the food and there will be perfumed sweating for the digestion of water. Inhabitants will rejoice in the company of their parents, spouses, and children (provided they were admitted to paradise)—conversing and recalling the past.

Other foods mentioned including meat and wine aromatic which non-intoxicating and bring a joy to those who drink. The dwellings for inhabitants will be pleasant, with lofty gardens, shady valleys, fountains scented with camphor or ginger; rivers of water, milk, honey and Sharabun Tahoora (pure drink); delicious fruits of all seasons without thorns;

One day in paradise is considered equal to a thousand years on earth. Palaces are made from bricks of gold, silver, pearls, among other things. Traditions also note the presence of horses and camels of "dazzling whiteness", along with other creatures. Large trees are described, mountains made of musk, between which rivers flow in valleys of pearl and ruby.[2]

The names of four rivers are Saihan (Syr Darya), Jaihan (Amu Darya), Furat (Euphrates) and Nil (Nile).[4] Salsabil is the name of a spring that is the source of the rivers of Rahma (mercy) and Al-Kawthar (abundance).[5] Sidrat al-Muntaha is a Lote tree that marks the end of the seventh heaven, the boundary where no creation can pass.

In spite of the goodly dwellings given to the inhabitants of paradise, the approval of God and nearness to him is considered greater. According to the Qur'an, God will bring the elect near to his throne (‘arsh), a day on which "some faces shall be shining in contemplating their Lord." The vision of God is regarded as the greatest of all rewards, surpassing all other joys.[2] 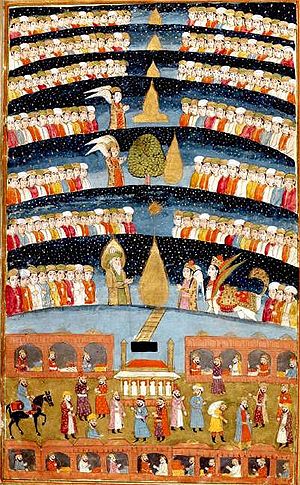 An artists representation of "Muhammed's Paradise". A Persian miniature from The History of Mohammed, Bibliothèque nationale de France, Paris.

Conditions of going to Paradise

According to the Qur'an, the basic criterion for salvation in afterlife is the belief in one God (tawḥīd), Last Judgment, good deeds, and in all the messengers of God, in Allah's angels; as well as believing that Muhammad is the final prophet of God, essentially the belief in Islam.

Though one must do good deeds and believe in God, salvation can only be attained through God's judgement.[6]

Conditions of going to Paradise according to the Qur'an:

Those who spend (freely), whether in prosperity, or in adversity; who restrain anger, and pardon (all) men;- for Allah loves those who do good;-
And those who, having done something to be ashamed of, or wronged their own souls, earnestly bring Allah to mind, and ask for forgiveness for their sins,- and who can forgive sins except Allah?- and are never obstinate in persisting knowingly in (the wrong) they have done.
For such the reward is forgiveness from their Lord, and Gardens with rivers flowing underneath,-an eternal dwelling: How excellent a recompense for those who work (and strive)!

Allah did aforetime take a covenant from the Children of Israel, and we appointed twelve captains among them. And Allah said: "I am with you: if ye (but) establish regular prayers, practice regular charity, believe in my messengers, honor and assist them, and loan to Allah a beautiful loan, verily I will wipe out from you your evils, and admit you to gardens with rivers flowing beneath; but if any of you, after this, resisteth faith, he hath truly wandered from the path or rectitude."

As in life there are many trials which one must face. This is also a condition individuals must encounter in order to enter Jannah.

Or do ye think that ye shall enter the Garden (of bliss) without such (trials) as came to those who passed away before you? They encountered suffering and adversity, and were so shaken in spirit that even the Messenger and those of faith who were with him cried: "When (will come) the help of Allah?" Ah! Verily, the help of Allah is (always) near!

Did ye think that ye would enter Heaven without Allah testing those of you who fought hard (In His Cause) and remained steadfast?

The Qur'an also asserts that those who reject the Prophets of God with their best knowledge are damned in afterlife[6] and if they reject in front of the Messenger of God, then they also face dreadful fate in this world and in afterlife (see Itmam al-hujjah). Conversely, a person who discovers monotheism not having been reached by a messenger is called Hanif.

A few Hadith, for example those narrated by Sahl bin Sad, Abd Allah ibn Abbas, and Abu Hurairah, suggest that some who were born before Islam, during the "period of ignorance" would be allowed into heaven without a full reckoning of their behavior. The "period of ignorance" is believed to be those monotheists who lived between the time of Isa's ascension and before the time of Muhammad's prophethood.[28]

The reason for this is Allahs says in the Quran “The Religion in the sight of Allah is Islam” (Qur'an 3:19) Also in another verse he says “If anyone desires a religion other than Islam (Submission to Allah), Never will it be accepted of him; and in the Hereafter he will be in the ranks of those who have lost (their selves in the hell fire).” (Qur'an 3:85) No other religions will be accepted in the sight of Allah because he chose Islam to be above all other religions.[30][31]

According to hadith, there are eight doors of Jannah. Their names are as following:[32]