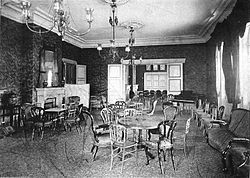 The Kazoku (華族?, literally "Magnificent/Exalted lineage") was the hereditary peerage of the Empire of Japan, which existed between 1869 and 1947.

Following the Meiji Restoration of 1868, the ancient court nobility of Kyoto, the Kuge, regained some of its lost status. Several members of the kuge, such as Iwakura Tomomi and Nakayama Tadayasu, played a crucial role in the overthrow of the Tokugawa shogunate,[1] and the early Meiji government nominated kuge to head all seven of the newly established administrative departments.

The Meiji oligarchs, as part of their Westernizing reforms, merged the kuge with the former daimyo (feudal lords) into an expanded aristocratic class on 25 July 1869, to recognize that the kuge and former daimyo were a social class distinct from the other designated social classes of shizoku (former samurai) and heimin (commoners). Itō Hirobumi, one of the principal authors of the Meiji constitution, intended the new kazoku peerage to serve as a political and social bulwark for the "restored" emperor and the Japanese imperial institution. At the time, the kuge and former daimyo consisted of a group of 427 families.

All members of the kazoku without an official government appointment in the provinces were initially obliged to reside in Tokyo. By the end of 1869, a pension system was adopted, which gradually displaced the kazoku from their posts as provincial governors and as government leaders. The stipends promised by the government were eventually replaced by government bonds.

Under the Peerage Act of 7 July 1884, pushed through by Home Minister and future first Prime Minister Hirobumi Ito after visiting Europe, the Meiji government expanded the hereditary peerage with the award of kazoku status to persons regarded as having performed outstanding services to the nation. The government also divided the kazoku into five ranks explicitly based on the British peerage,[citation needed] but with titles deriving from the ancient Chinese nobility:

The initial rank distribution for kazoku houses of kuge descent depended on the highest possible office to which its ancestors had been entitled in the imperial court. Thus, the heirs of the five regent houses (go-seike) of the Fujiwara dynasty (Konoe, Takatsukasa, Kujō, Ichijō and Nijō) all became princes, the equivalent of a European duke. The heads of other kuge houses (including Daigo, Hamuro, Kumamoto, Hirohata, Kazan'in, Kikutei, Koga, Nakamikado, Nakayama, Oinomikado, Saga, Sanjo, Saionji, Shijō and Tokudaiji) became marquises. Also, the head of the Shō family, the former royal family of the Ryūkyūs (Okinawa), was given the title of marquis. When the Korean Empire was annexed in 1910, the House of Yi was mediatized as an incorporated and therefore subordinate kingship (王).

Excluding the Tokugawa, the initial kazoku rank distribution for the former daimyo lords depended on rice revenue: those with 150,000 koku or more became marquises, those with 50,000 koku or more become counts, and so forth. The head of the Tokugawa clan, Tokugawa Iesato, became a prince, the heads of primary Tokugawa branch houses (shinpan daimyo) became marquises, the heads of the secondary branches became counts and the heads of more distant branches became viscounts. The head of the Matsudaira (Fukui Domain) branch was raised to the rank of marquess from the rank of count in 1888. In 1902, the former shogun Tokugawa Yoshinobu was created a prince, and the head of the Mito shinpan house was raised to the same rank, prince, in 1929.

The Mōri (Chōshū Domain) and Shimazu (Satsuma Domain) clans were both ennobled as princes in 1884 for their role in the Meiji Restoration; the Yamauchi (Tosa Domain) clan was given the rank of marquis. The heads of the main Asano (Hiroshima Domain), Ikeda (Okayama and Tottori domains), Kuroda (Fukuoka Domain), Satake (Kubota Domain), Nabeshima (Saga Domain), Hachisuka (Tokushima Domain), Hosokawa (Kumamoto Domain) and Maeda (Kaga Domain) clans became marquesses in 1884. The head of the Date-Uwajima clan (a branch of the former ruling family of the Sendai Domain) was raised to the rank of a marquis in 1891.

Many of those who had significant roles in the Meiji Restoration, or their heirs, were ennobled. Iwakura Tomosada, the son of Iwakura Tomomi, became a prince in 1884, while Ito Hirobumi and Yamagata Aritomo were ennobled as counts in 1884, promoted to marquesses in 1895 and finally became princes in 1907. The heirs of Okubo Toshimichi and Kido Takayoshi, two of the three great nobles of the Meiji Restoration, were ennobled as marquesses in 1884, followed by the heirs of samurai general-politician Saigō Takamori in 1902.

Emperor Meiji in a formal session of the House of Peers. Ukiyo-e woodblock print by Yōshū Chikanobu, 1890

As in the British peerage, only the actual holder of a title and his consort were considered part of the kazoku. The holders of the top two ranks, prince and marquis, automatically became members of the House of Peers in the Diet of Japan upon their succession or upon majority (in the case of peers who were minors). Counts, viscounts and barons elected up to 150 representatives from their ranks to sit in the House of Peers.

Titles and hereditary financial stipends passed according to primogeniture, although kazoku houses frequently adopted sons from collateral branches of their own houses and other kazoku houses to prevent their lines from dying out. A 1904 amendment to the 1889 Imperial Household Law allowed minor princes (ō) of the imperial family to renounce their imperial status and become peers (in their own right) or heirs to childless peers.

The 1946 Constitution of Japan abolished the kazoku and ended the use of all titles of nobility or rank outside the immediate Imperial Family. Nonetheless, many descendants of former kazoku families continue to occupy prominent roles in Japanese society and industry.[4]