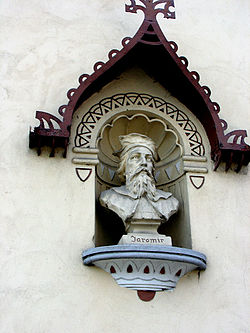 Jaromír (c. 975 - 4 November 1035) was the second son of Boleslaus II the Pious and Emma of Mělník. In 1003, he rebelled against his elder brother Boleslaus III, who had him castrated,[1] but was unable to secure the throne, which was subsequently taken by Bolesław the Brave, King of Poland. Jaromír and his brother Oldřich then sought military backing from the German King Henry II. At Merseburg, Jaromír promised to hold Bohemia as a vassal of Henry. This action definitively placed Bohemia within the jurisdiction of the Holy Roman Empire.

In 1004, Jaromír occupied Prague with a German army and made himself Duke. The state he regained was a small one, as Polish forces still held Moravia, Silesia, and Lusatia. Jaromír's reign—like so many of the other early Czech rulers—was a struggle to regain lost lands. In 1012, Jaromír was dethroned by Oldřich (who had him blinded[1]) and forced once again into exile. In a surprise campaign, Jaromír in turn managed to depose Oldřich (1033), but his second reign was short-lived. A year later Oldřich was restored by his son Bretislaus I. Jaromír was imprisoned at Lysá nad Labem and died (assassinated by one of the Vršovci) in 1035, a year after the death of his brother.