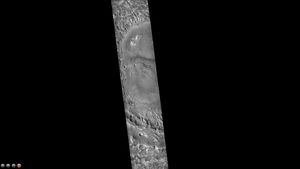 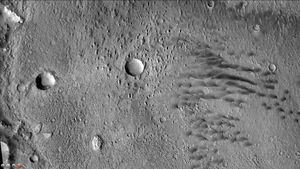 Jarry-Desloges Crater is an impact crater in the Iapygia quadrangle of Mars, located at 9.5°S latitude and 276.3°W longitude. It is 92.0 km in diameter and was named after René Jarry-Desloges, and the name was approved in 1973.[1]

Pictures show dunes on the floor of the crater; these can be seen in the pictures below; some of them are Barchans. When there are perfect conditions for producing sand dunes, steady wind in one direction and just enough sand, a barchan sand dune forms. Barchans have a gentle slope on the wind side and a much steeper slope on the lee side where horns or a notch often forms.[2] The whole dune may appear to move with the wind. Observing dunes on Mars can tell us how strong the winds are, as well as their direction.